The outrageously and ridiculously hot Ranveer Singh has astounded us with his recent sober avatar! With befikre releasing soon, the actor is donning some really cool ensembles and stepping his most stylish foot forward and needless to say, we are mega IMPRESSED!

Bollywood’s new-age Jumping Jack aka Ranveer Singh is gearing up for his next release, Befikre opposite Vaani Kapoor, helmed by Yashraj Productions and directed by the maverick Aditya Chopra. A quintessential romantic comedy, Befikre chronicles the shenanigans of Dharam and Shyra and their reckless escapades that include madcap dancing, Ranveer’s striptease, Vaani’s ravishing avatar and 23 kisses between the two.  As they say, ‘When in Paris, kiss as the French do!’, the duo is seen locking lips throughout the trailer, songs, and stills of the movie. When he is not rustling the buzz vines with his on-off relationship with lady love, Deepika Padukone, he is also a man with tremendous energy levels and regaling us with his antics, OTT dressing, and a sassy swagger! Displaying quite a broad spectrum of looks, Ranveer belongs to the rare breed of experimental men! His stylist Nitasha Gaurav is the reckoning force behind this versatility. Whilst there is no dearth of his OTT dressing moments, there have been times when the Bajirao Mastani actor has donned sober clothes and wowed us with the classic groomed bearded look! Don’t believe us? Scroll down to read more and be as dazed as we are! (ALSO READ: Khulke Dhulke’s Vaani Kapoor gives this wedding season’s major #Badass Bride Goals!) Also Read - RIP Diego Maradona: Shah Rukh Khan, Ranveer Singh, Kareena Kapoor Khan, Others Pay Tribute to Greatest Player of All Time 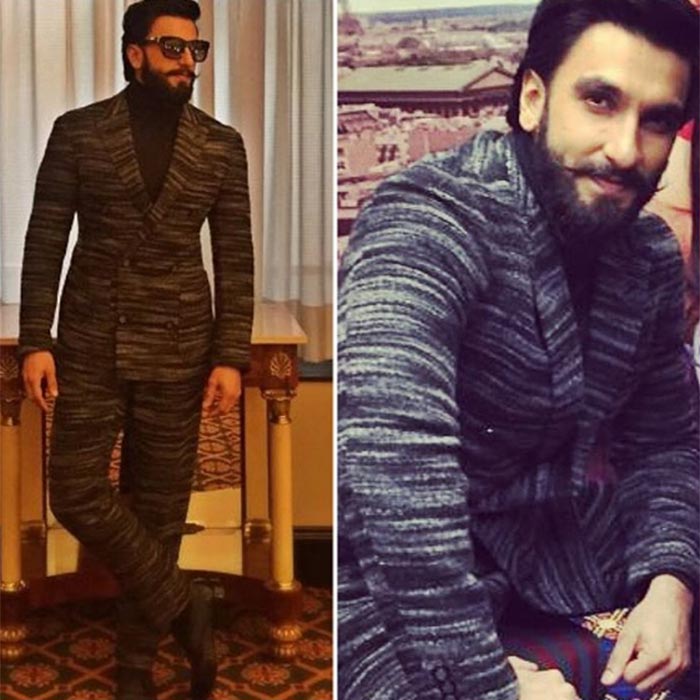 Undeniably a suave look, Ranveer donned a Canali suit and Voganow shoes for the Befikre promotions in Bradford. Setting our hearts aflutter is the mustache, beard, and those deep-set eyes! Also Read - Bingo Says Ranveer Singh's Ad Shot A Year Ago After SSR Fans Trend #BoycottBingo Over 'Photon' Reference 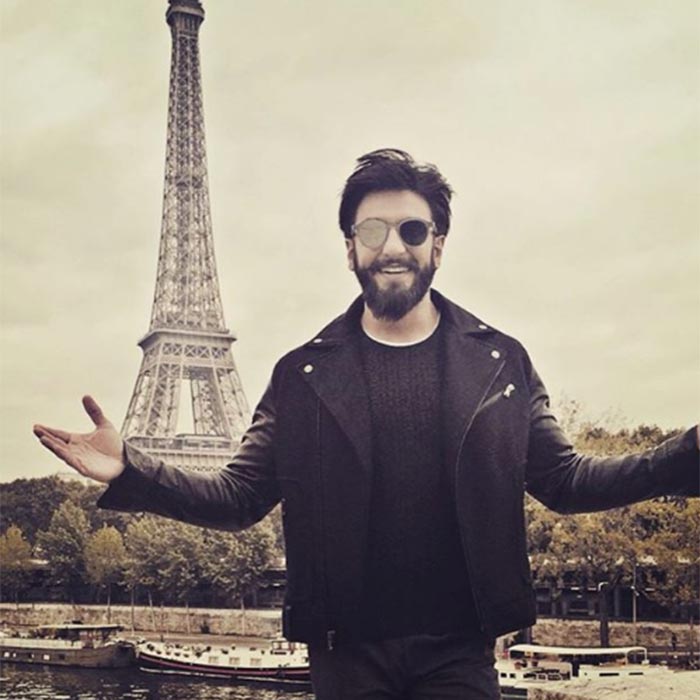 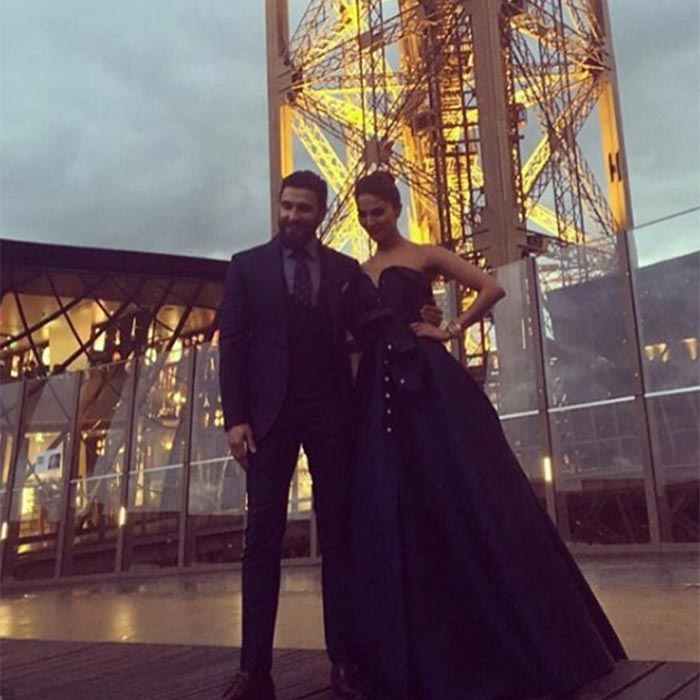 At the trailer launch of Befikre, Vaani and Ranveer upped the glam quotient with Ranveer donning separates from Rahul Khanna Rohit Gandhi with a pair of smart Louboutins. 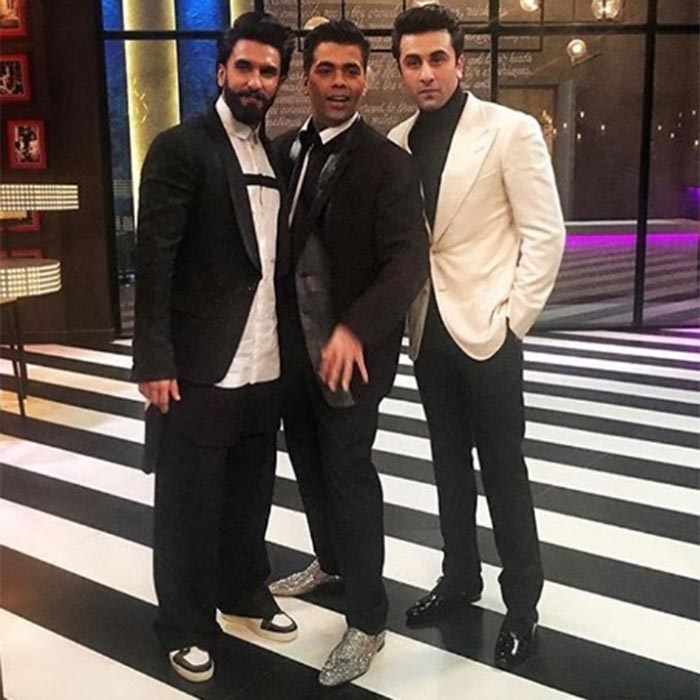 On his recent appearance on Koffee with Karan with Ranbir Kapoor, Ranveer donned an Ashish Soni suit from his SS 2017 collection, Louboutins, and an Omega wristwatch. 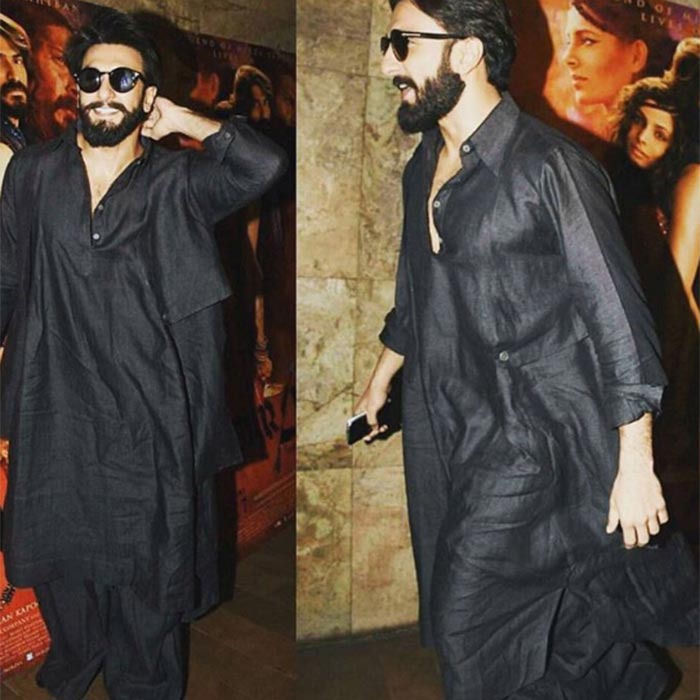 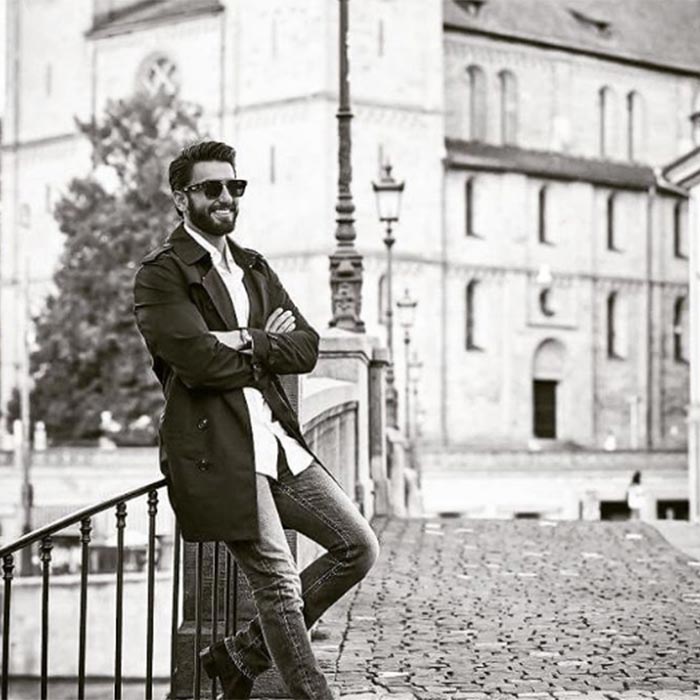 Donning a sober look of a classic white shirt with a trench coat and denim, Ranveer looks hot AF! 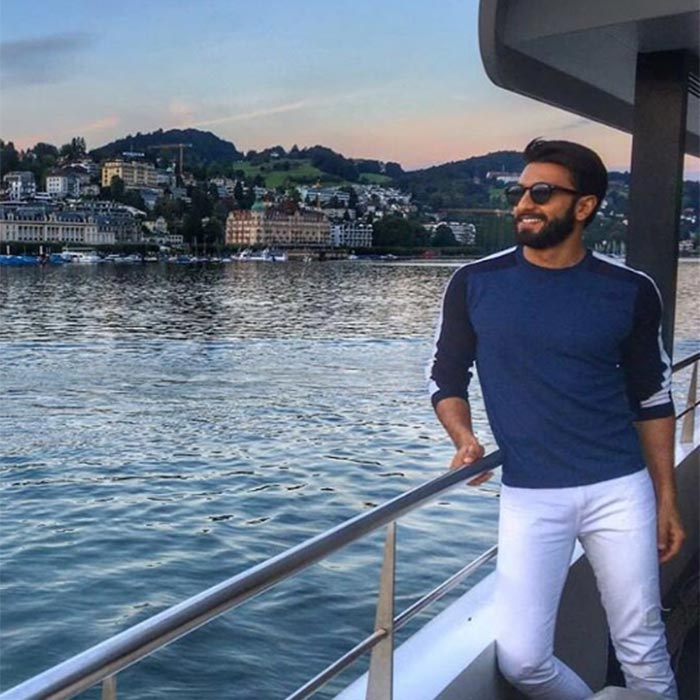 Showing us how casual can be cool and comfortable, Ranveer donned Emporio Armani and Saint Laurant on his recent visit to Switzerland. (ALSO READ: Whoa! 12 times Deepika Padukone reminded us why Black is the new Black!) 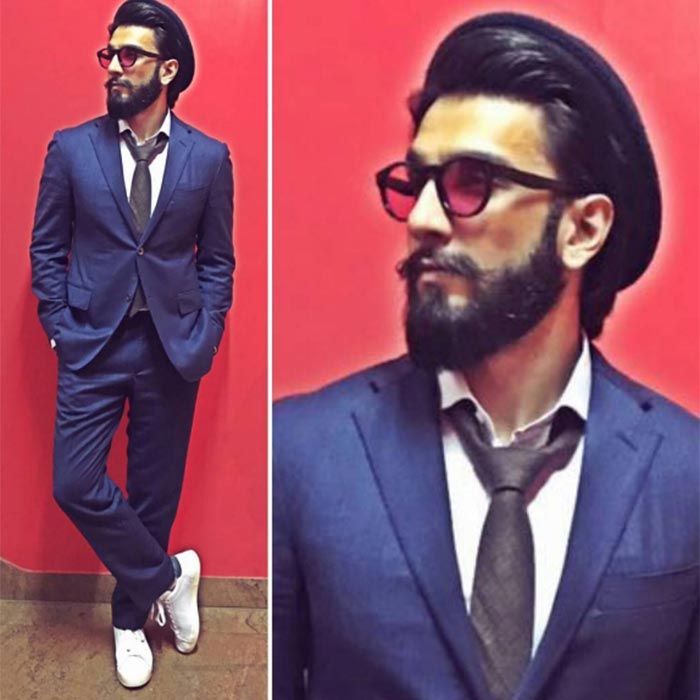 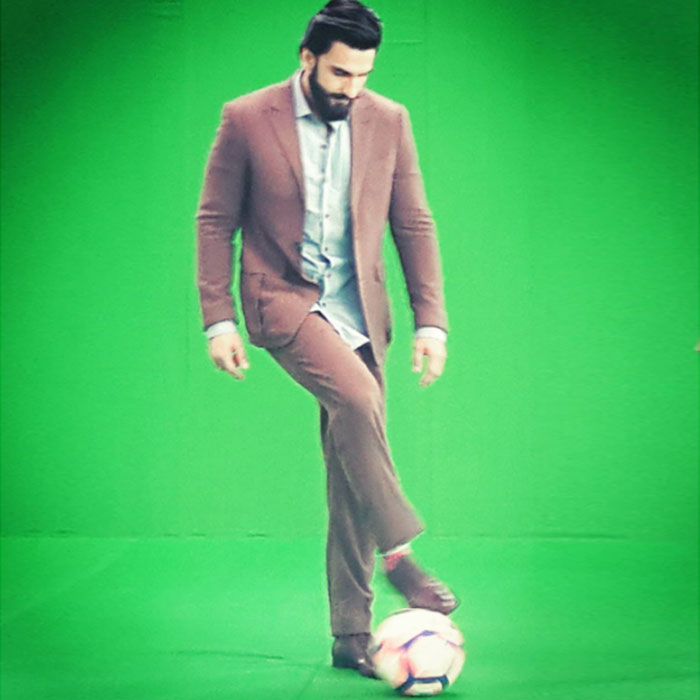 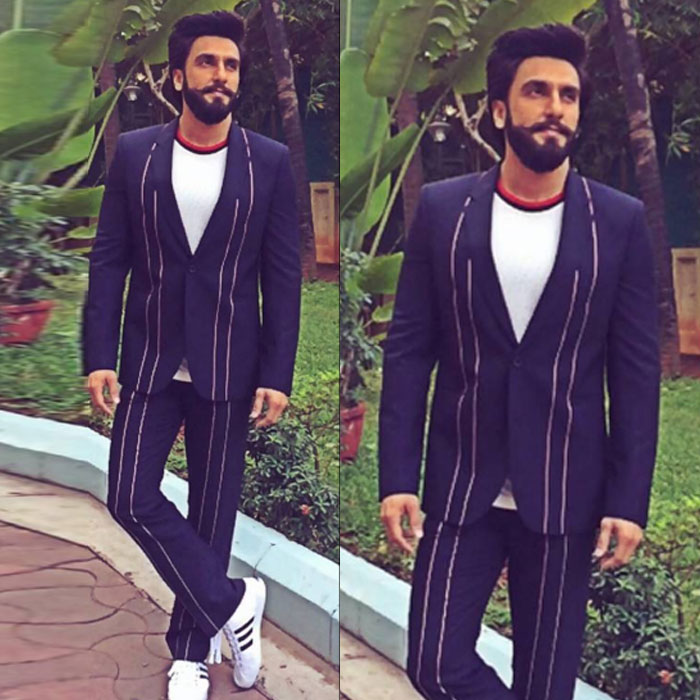 For yet another round of Befikre promotions, Ranveer donned a Paul Smith Fall 16 runway suit, a Nought One T-shirt. and shoes from Adidas Originals. 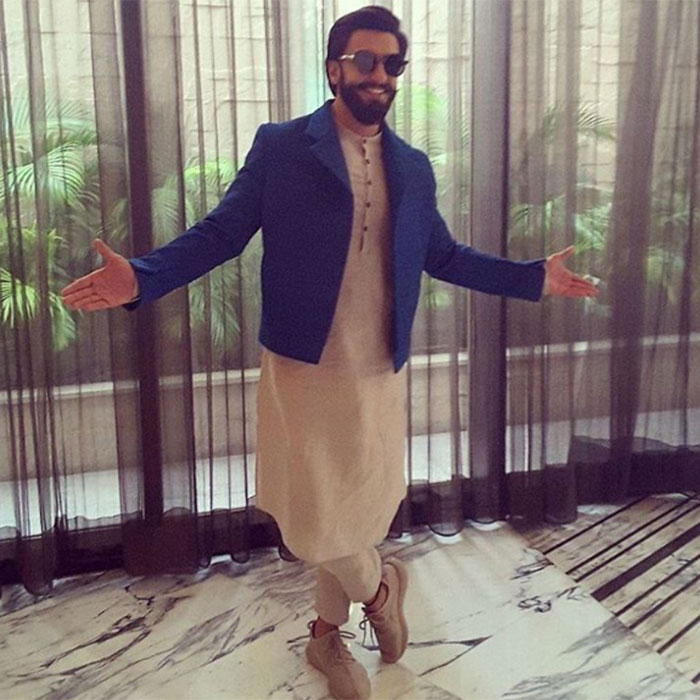 For the Shekhar Gupta chat show, Ranveer was snapped in a Gaurav Khanijo ensemble with shoes from Adidas Originals.

Well, while some of his out-of-the-box moments may make our eyes sore, tickle our ribs and applaud his confidence, his sober moments are rare and we are certainly loving what stylist Nitasha Gaurav is doing! Certainly a stylist’s dream, Ranveer gives men some serious #StyleGoals!