Indian model-turned-actress-turned-producer, Dia Mirza, has come a long way after winning the Miss Asia Pacific title. This doe-eyed girl who debuted with Rehna Hai Tere Dil Mein and has appeared in a

Indian model-turned-actress-turned-producer, Dia Mirza, has come a long way after winning the Miss Asia Pacific title. This doe-eyed girl who debuted with Rehna Hai Tere Dil Mein and has appeared in a string of multi-starrers like the Munnabhai series, Parineeta, and Honeymoon Travels Pvt . Ltd turns 35 today. She may have taken a sabbatical from acting, but she continues to astound us with her remarkable fashion game. Born in Hyderabad to a German father and Bengali mother, Dia dazzled the world through the Miss India Contest in 2000 and thereafter went on win the coveted Miss Asia-Pacific title for India. She tied the knot with her longtime beau, Sahil Sangha, amidst much fanfare in 2014. An active socialite, Dia is an ambassador for Swachh Bharat, Sanctuary Asia’s Tiger Conservation program, and a founder member of Wildlife Trust of India’s Club Nature. With quite a few brand endorsements in her kitty, Dia’s multiple public appearances are outlined by a sartorial choice of ethnic wear that has on numerous occasions, astounded us! Dia’s style squad comprises celeb stylist Theia Tekchandaney, hairstylist Shobha Kewal and makeup artist Bianca Hartkopf. Scroll down to know more as we delve into this lovely lady’s style game. (ALSO READ: 13 times Vaani Kapoor made a rocking style statement for Befikre promotions) Also Read - Dia Mirza's Olive Green Jacket And a Grey T-Shirt From Her Environmentally Sound Wardrobe is Cool Enough to Don if Planning a Quick Getaway 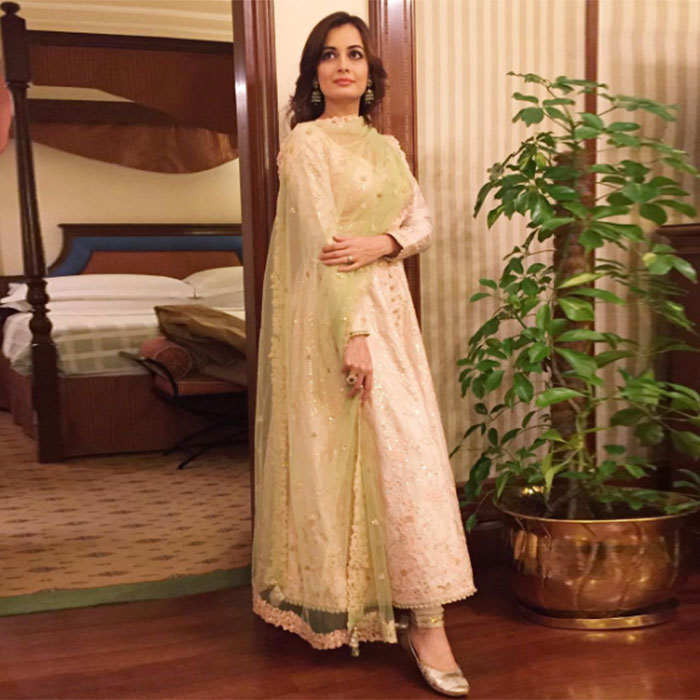 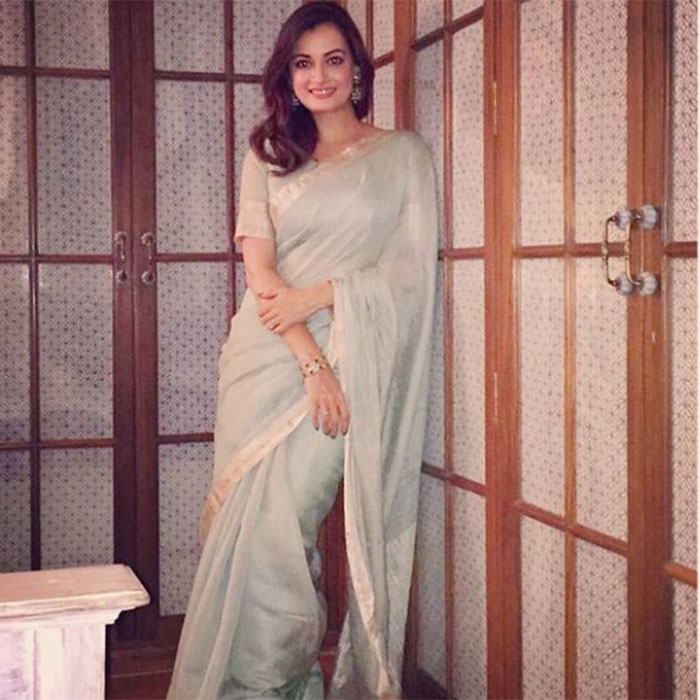 A self-confessed handloom lover, Dia’s Instagram is replete with pictures of her looking radiant in sarees. Donning a lovely saree and keeping her accessories restricted to a bracelet and earrings, Dia shows us how to perfect the simple yet beautiful look. (ALSO READ: Yuvraj Singh and Hazel Keech’s Delhi wedding reception outfits are out of a fairy tale dream!) 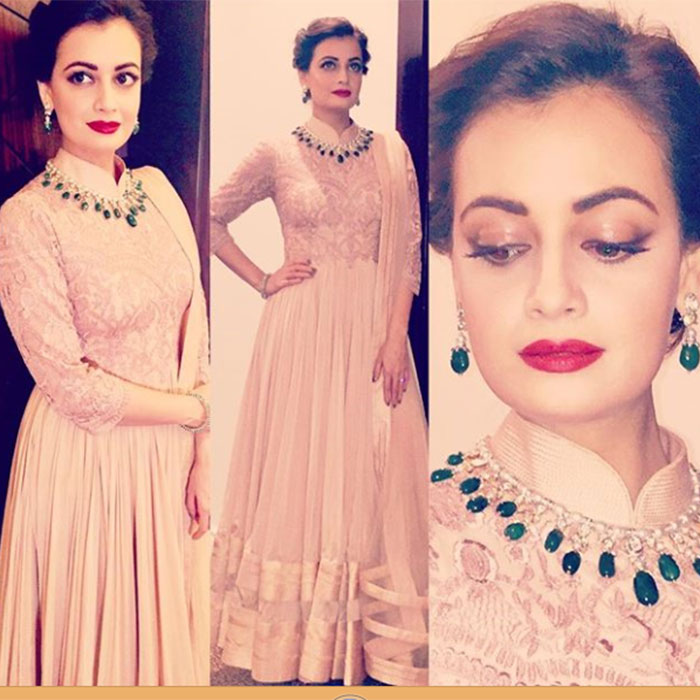 For an appearance in Dubai, Dia gave some serious vintage vibes in a Shantanu and Nikhil ensemble and accessorized her look with a striking jewelry from Legacy Fine Jewelry. With muted makeup, bright lips, and a chic hairdo, Dia looks mesmerizing. 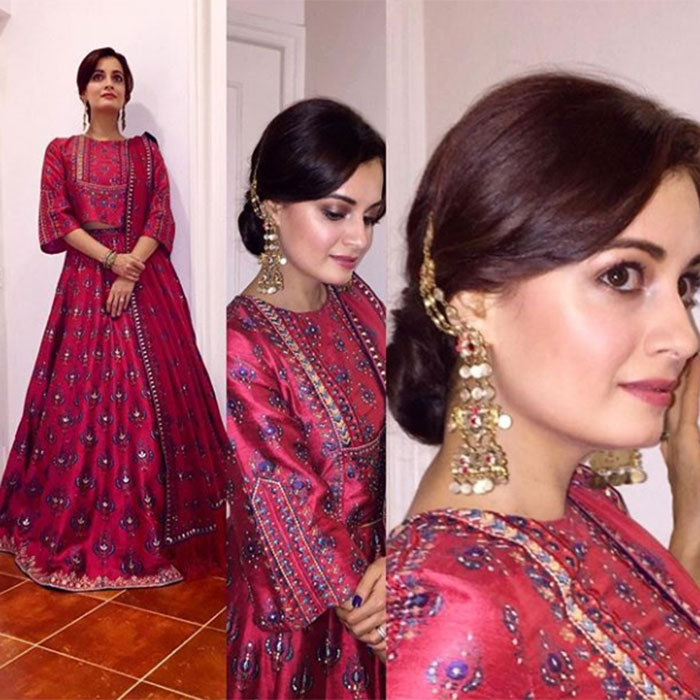 For Diwali, Dia donned a gorgeous bright pink Anita Dongre ensemble, accessorized with statement earrings from the tribe by Amrapali and a chic hairdo. 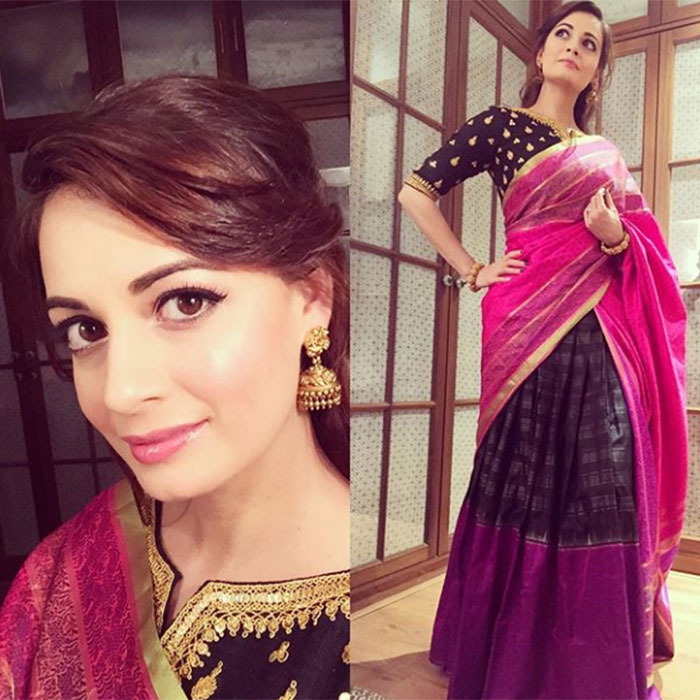 For yet another Diwali party, Dia professed her love for the handloom and paid an ode to the city of her birth, Hyderabad by donning a black and pink half saree by Gaurang Shah. With minimal makeup and accessories by Gehna Jewelers, Dia looks absolutely ravishing. (ALSO READ: Looking for maternity wear? Steal these crush-worthy pregnancy clothes ideas from Kareena Kapoor, Genelia D’Souza Deshmukh and Mira Rajput!) 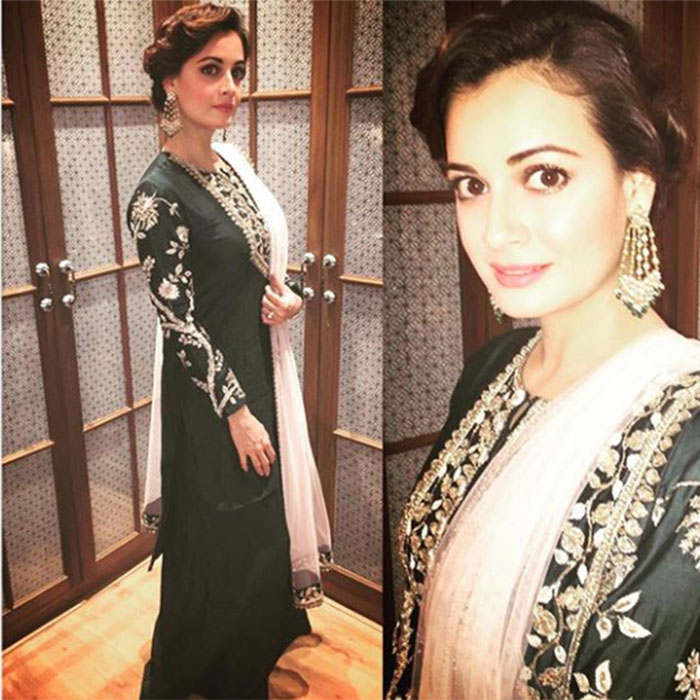 Stunning us with yet another Diwali look, Dia donned a Payal Singhal ensemble teaming it with statement earrings by Golecha jewels. 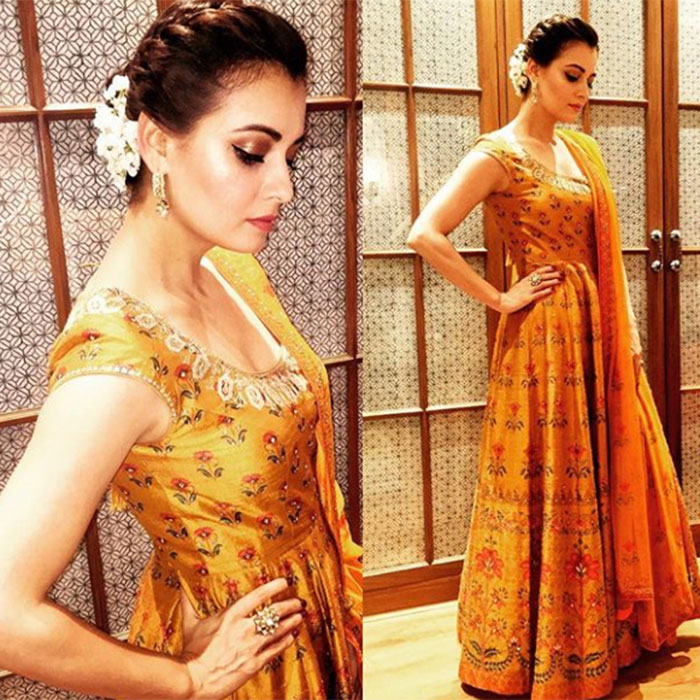 An Anita Dongre addict, Dia sparkled yet another festive look of an Anita Dongre ensemble with jewelry from Pink City and an elaborate hairdo adorned with flowers. 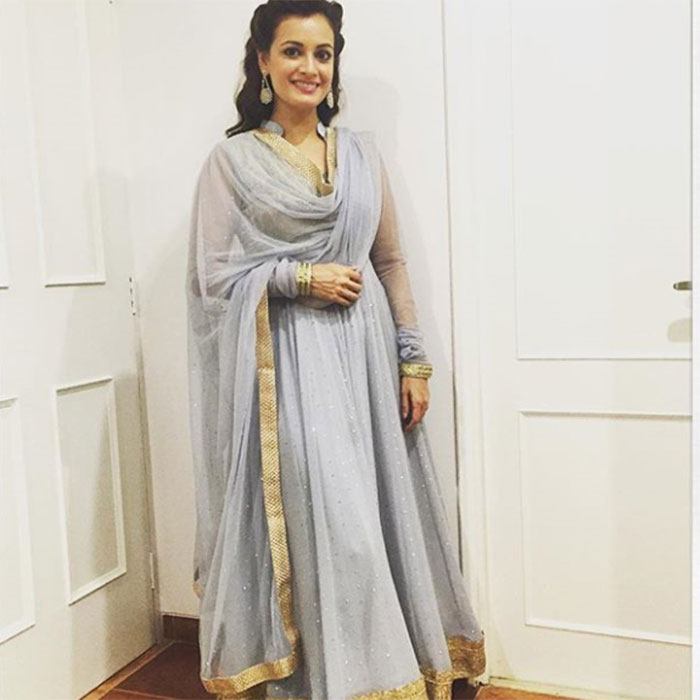 Professing her love for ethnic wear yet again, this time through a Bhumika Grover ensemble, Dia looks elegant with statement accessories by Renu Oberoi Luxury Jewelry. 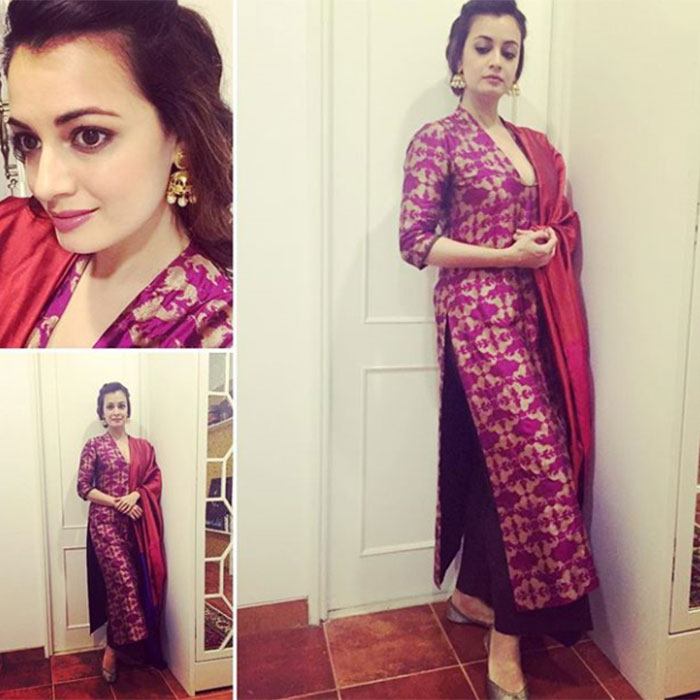 Ravishing us in yet another pink designer ensemble, this time by Payal Khandwala and jewelry by Gehna Jewelers, Dia lends us some serious #EthnicWearGoals! (ALSO READ: 5 ways to rock Shah Rukh Khan’s Raees retro look!) 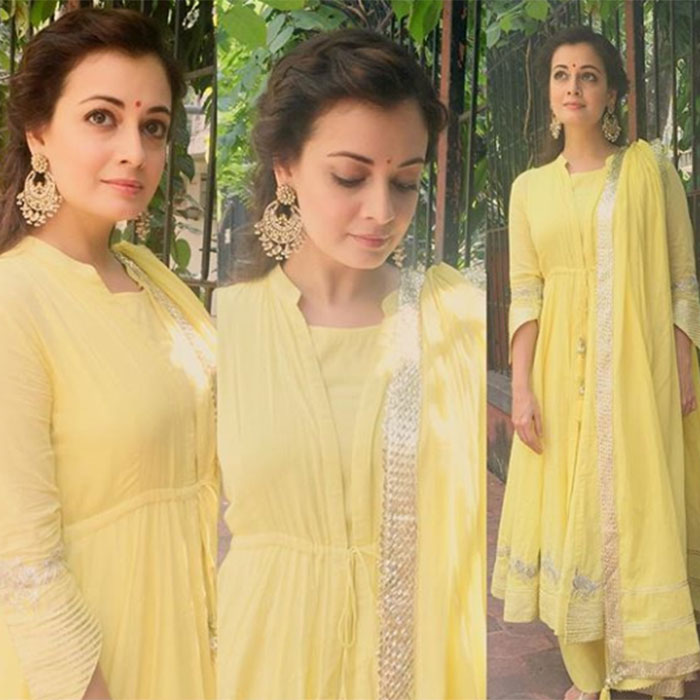 Wowing us in yet another simple ethnic wear, Dia donned a pale yellow colored designer ensemble for Ganesh Chaturthi celebrations by Sukriti and Akriti, accessorized by a pair of statement earrings. 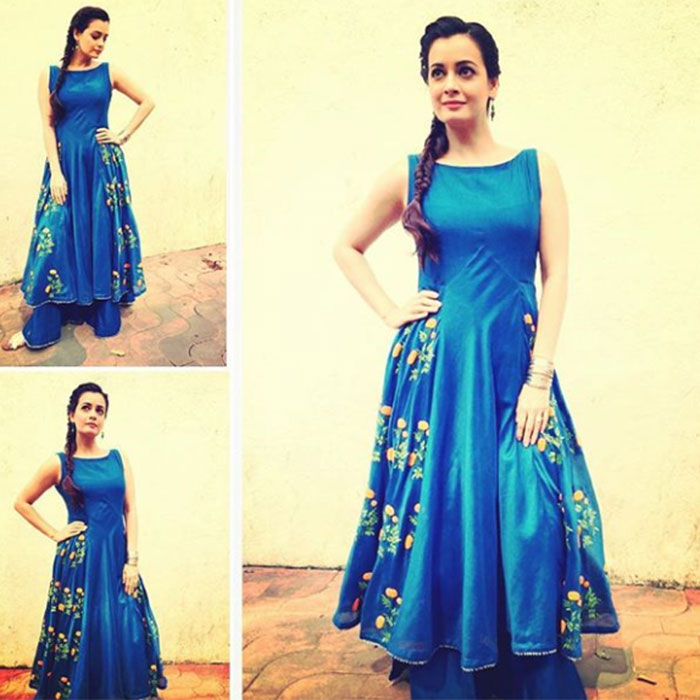 Moving over to a vibrant color, blue, Dia donned a lovely designer flared ensemble by Vineet&Rahul for a shoot. 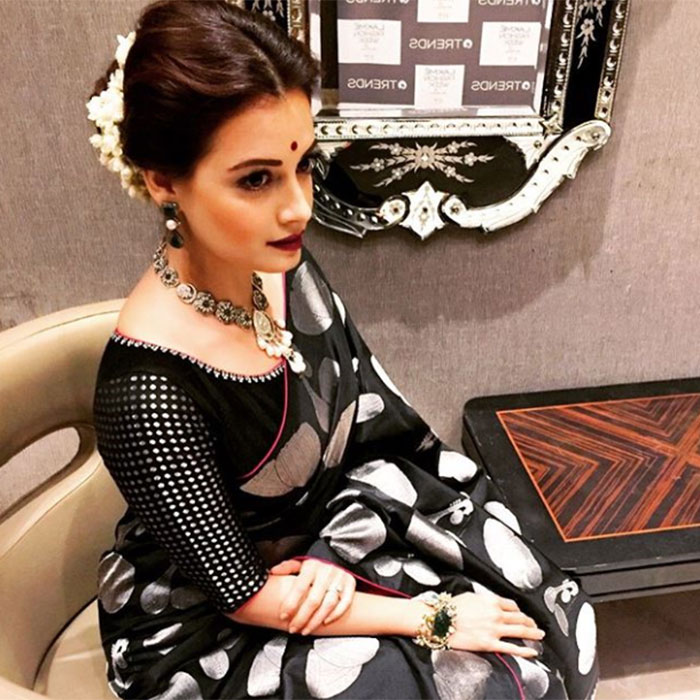 Sashaying down the ramp for Lakme Fashion Week, Dia channeled her love for handloom weaves through a classic Kanjeevaram silk saree from Tulsi Silks replete with jewelry by Golecha jewels and an elaborate hairdo adorned with flowers and makeup that accentuated her doe eyes along with bright dark lips. 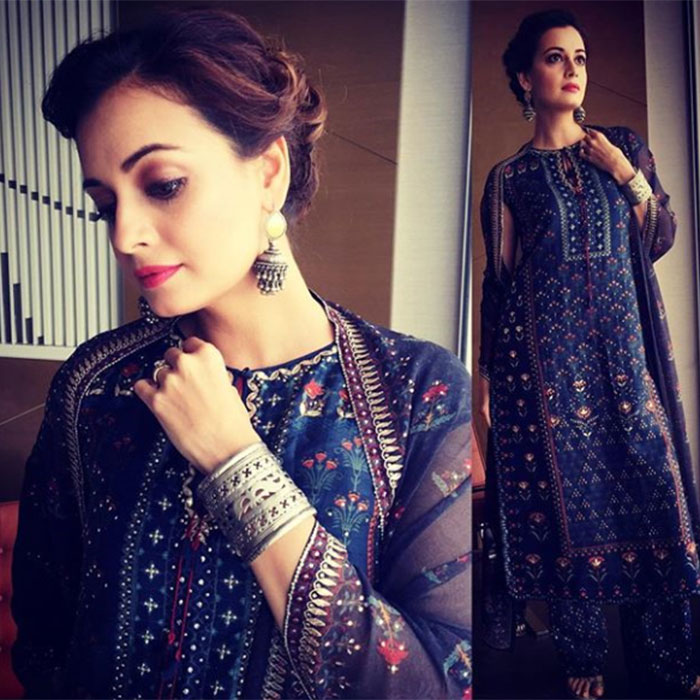 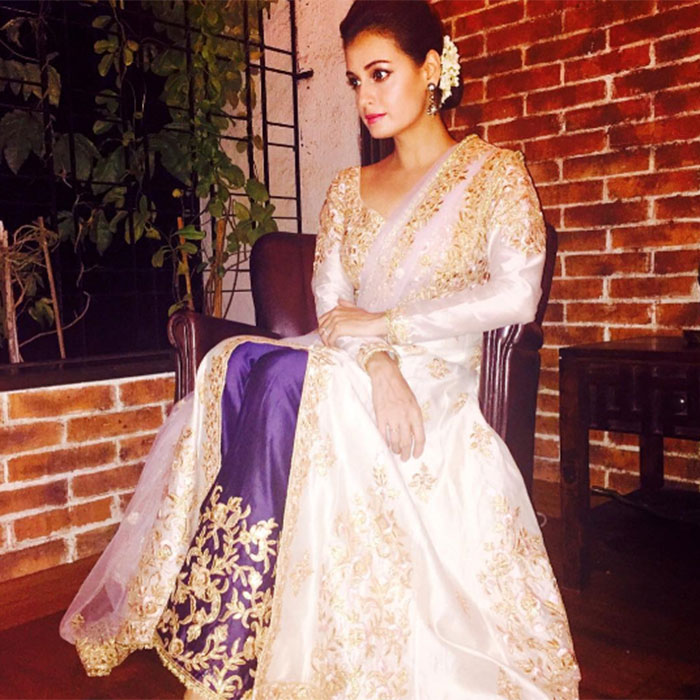 Rocking yet another ethnic designer ensemble, this time by Tamanna Punjabi Kapoor, Dia looks magnificent in a white, gold and blue dress paired with statement earrings and steering clear of any other accessory. With her signature elaborate hairdo, Dia looks breathtakingly gorgeous.

Slaying us with one ethnic outfit after another, Dia is definitely a designer’s muse and we are helplessly and hopelessly in love with her traditional avatar.