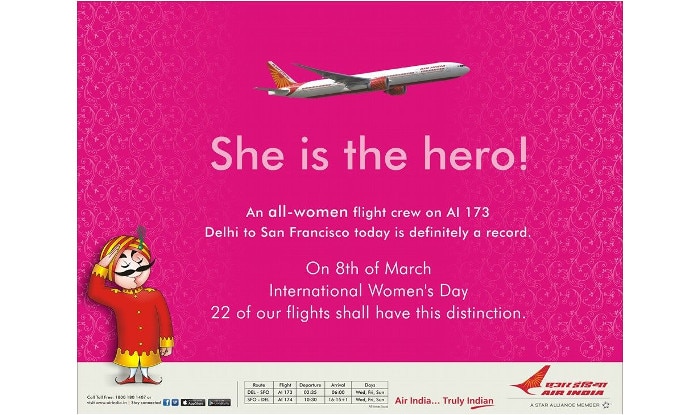 “It will be a historic flight and the longest to be operated by all-women crew,” Ashwini Lohani, the chairman and managing director of Air India, said. “The airline has immense respect for women and it would be a symbol of women empowerment.”

Air India flight AI 73 covered a distance of 14,500 kilometers over 17 hours, taking off on March 6 from Delhi, and landing in San Francisco the following day. The crew flew back to New Delhi on March 8.

This flight isn’t the first time AI has successfully celebrated International Women’s Day. Each year, the company operates select flights on its international and domestic routes with all-female crews. The airline has around 3,765 female employees, including pilots, engineers, technicians, doctors, security personnel and cabin crew.

Naturally, this move brought a great amount of applause for Air India on Twitter.

It wasn’t an ordinary flight .

Congratulations to Air India for having an all women crew on its long haul flight. Celebrate #IWD2016 #AirIndia #cdnpoli #timesofindia

While this is an excellent accomplishment and a great way to set up a world record for the nation, and of course, the airline, wouldn’t it be even more wonderful if this kind of a flight flew more often than just once a year?