Alia Bhatt’s Purple Jumpsuit From Galvan London is Something That Only She Could Have Rocked so Well, See Photos

Alia Bhatt wore a purple jumpsuit by an international designer and rocked every bit of it. See pictures here...

Just like her on-screen appearances, Alia Bhatt makes sure her off-screen appearances are also successful in creating an impact. The actress recently impressed everyone by turning up the glam quotient at Isha Ambani-Anand Piramal wedding. And she has done the same yet again. The actress was clicked today taping for a news show with Anushka Sharma and for the interview, she wore a jumpsuit in a striking colour. Also Read - Alia Bhatt Reminiscences Her Childhood Days As She Plays With Kids in Heart-warming Video | WATCH

Alia rocked a purple coloured jumpsuit by international designer Galvan London. She wore the outfit with no jewellery, and let that colour do the entire talking for her. To accentuate the look further, Alia kept her hair tied in a ponytail. This is one of Alia’s looks that gave fresh and youthful vibes from the word go. The actress rocked the number better than anybody else and more points to her for not going OTT with it. Check out the pictures here: Also Read - Alia Bhatt Looks Glamorous in Designer Georges Hobeika’s Black and White Checkered Number

While attending the Ambani wedding a few days back, the actress was seen going classy in a printed lehenga. Alia wore a Manish Malhotra lehenga with hair tied in a sleek middle-parted bun. Light makeup and a pair of statement earrings finished off her look. Alia was definitely one of the best-dressed celebs of the evening. Check out the pictures here: 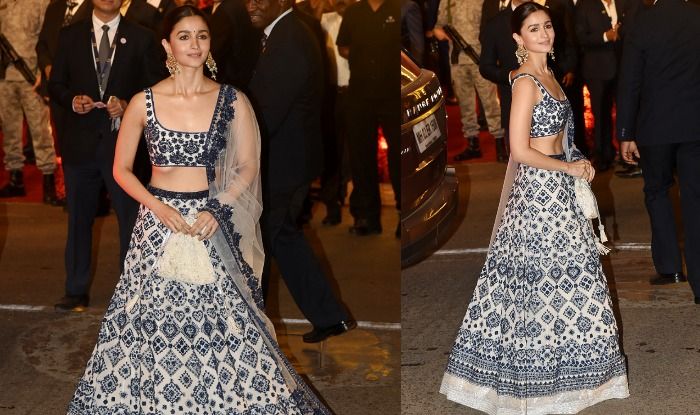 On the work front, the actress is currently busy shooting for two Dharma Productions’ films — Kalank and Brahmastra. While the former is being directed by Abhishek Varman, the latter has Ayan Mukerji as its helmer. in Brahmastra, Alia has been paired opposite actor Ranbir Kapoor and their chemistry has already become the talk of the town. Further, her next film, Gully Boy, featuring Ranveer Singh opposite her, will soon be screened at the prestigious Berlin Film Festival. The Zoya Akhtar’s directorial is slated for release on February 14, 2019.