Right from his bromance with President Barack Obama to his witty speech at the US Capitol Hill, India’s Prime Minister Narendra Modi garnered massive attention from media and everyone else on his latest visit to the United States

Right from his bromance with President Barack Obama to his witty speech at the U.S. Capitol Hill, India’s Prime Minister Narendra Modi garnered massive attention from media and everyone else on his latest visit to the United States, his fourth in two years. Also Read - Pradhan Mantri Gramin Awaas Yojana: Over 6.1 Lakh Beneficiaries in UP to Receive Rs 2691 Crore Assistance

Modi, who is on a whirlwind five-nation tour (in 140 hours) which started in Afghanistan and included Qatar, Switzerland, U.S., and Mexico, arrived in the U.S. on Monday, June 6, to cement the U.S.-India ties before Obama’s term ends. Also Read - Budget 2021: Will Govt Bring Cheer to Pandemic-hit Middle Class? A Look at Expectations This Year

His seventh meeting with President Obama turned out to be a watershed moment for the US-India relationship especially in the areas of defense, cyber security, trade and climate change and nuclear energy.

As Modi embarks on the last leg of his five-nation tour to Mexico, we bring to you some of the highlights of his U.S. visit.

Modi was invited to Capitol Hill by House of Representatives Speaker Paul Ryan and was greeted with by almost three minutes of applause while entering the House chamber.

He spoke on issues ranging from climate change to terrorism, defense and security cooperation to trade and economic relationship. Celebrating the relationship between the two countries, relationship, he stated that their close ties reflect deeply shared democratic values of equality and liberty.

“The threads of freedom and liberty form a strong bond between our two democracies,” Modi said. “Our nations may have been shaped by diverse histories, cultures, and faiths, yet our belief in democracy for our nations and liberty for our countrymen is common.”

“As a representative of the world’s largest democracy, it is indeed a privilege to speak to the leaders of its oldest,” he said and was interrupted by a loud applause and standing ovation from lawmakers and Indian-Americans in the visitors’ gallery. 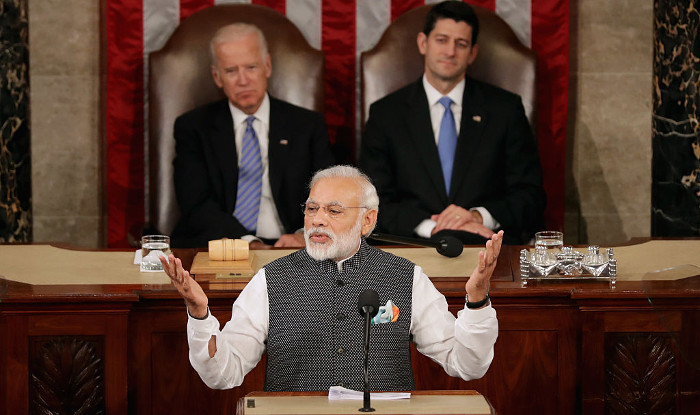 Highlighting the shared practices between the two nations, Modi wittily said, “I am informed that the working of the U.S. Congress is harmonious. I am also told that you are well-known for your bipartisanship. Well, you are not alone. Time and again, I have also witnessed a similar spirit in the Indian Parliament, especially in our Upper House.”

He even praised the contributions of the Indian-American community to the U.S.

“Connecting our two nations is also a unique and dynamic bridge of three million Indian Americans,” he said. “They are among your best CEOs, academics, scientists, economics, doctors, even spelling bee champions. They are your strength. They are also the pride of India. They symbolize the best of both our societies,” he said eliciting standing applause from the US lawmakers.

Modi charmed the lawmakers with his humor while underlining the lingering tensions between the two nations on intellectual property rights.

Stating that 30 million Americans are estimated to practice yoga, the Prime Minister said: “It is estimated that more Americans bend for yoga than to throw a curve ball. And, no, Mr. Speaker, we have not yet claimed intellectual property rights on yoga,” prompting laughter and applause. Senators Ted Cruz and Marco Rubio seemed to have a hearty laugh on the issue.

Modi is the fifth Indian Prime Minister after Rajiv Gandhi, P.V. Narasimha Rao, Atul Bihari Vajpayee and Manmohan Singh to address a joint sitting of the US Congress.

Modi later attended a reception hosted jointly by the Foreign Relations Committees of the House of Representatives and the Senate as well as the India Caucus before emplaning to Mexico.

On Tuesday, the second day of his visit, Modi met Obama at the Oval office. The meeting lasted for about an hour followed by a joint press conference. This was the seventh meeting between the two leaders since Modi assumed power in 2014.

In a joint press conference, Modi thanked Obama for his support to India in its bid for membership of the Missile Technology Control Regime (MTCR) and the Nuclear Supplies Group (NSG.)

“I want to thank my close friend President Obama. We discussed a range of issues. I also thank the U.S. Congress for inviting me,” Modi said. “We are working shoulder to shoulder. We are proud. We will continue working together…India is a young country, over 800 million of Indians below the age of 35. Our youth power in partnership with the U.S. will serve mankind.”

“It was natural for India and the U.S., two biggest democracies, to ‘deepen and broaden’ partnership,” POTUS Obama added. 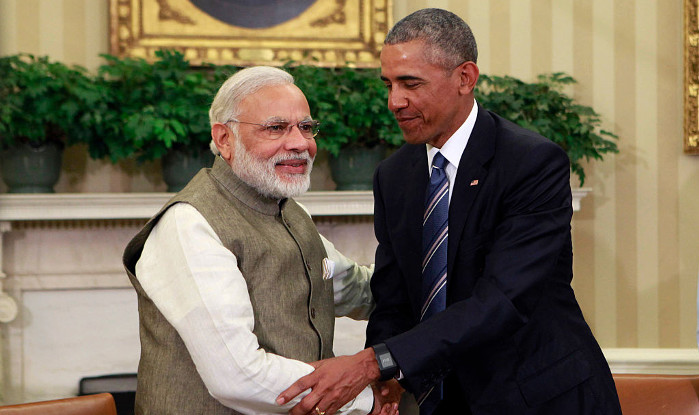 A detailed joint statement was released at the end of the talks, outlining the bilateral deliverables of this visit. Some of the key takeaways from the joint India-U.S. joint statement included: Support for India becoming a member of the NSG, agreement on building six nuclear plants in Andhra Pradesh, backing for India’s stand on terrorism vis-à-vis Pakistan and financial assistance for India’s clean energy initiatives.

The document laid out a road map for other broad ranging collaborations in the areas of defense, cyber security, and trade.

Eleven years after the signing of the civil nuclear deal, both Obama and Modi welcomed the start of preparatory work for six reactors to be built by Westinghouse Electric Co. in Andhra Pradesh. In a joint statement, both leaders said that India and the US Export-Import Bank intend to work together toward a competitive financing package for the project and will work to finalize the contractual agreement by June 2017.

“Once completed, the project would be among the largest of its kind, fulfilling the promise of the U.S.-India civil nuclear agreement and demonstrating a shared commitment to meet India’s growing energy needs while reducing reliance on fossil fuels,” the joint statement said.

The White House acknowledged that the historic climate change agreement in Paris was unlikely without India’s leadership.

“We’ve said on many occasions that India’s role in that process was significant and it’s unlikely that we would have actually reached an agreement in Paris last December had the Indians not stepped up and shown some leadership in making some substantial commitments,” White House Press Secretary Josh Earnest told reporters.

The two leaders will again meet at the G20 summit.

Modi’s visit to the Oval office was followed by a meeting with U.S. business leaders where he made a strong sales pitch to encourage them to invest in India. He highlighted the potential of the U.S.-India strategic and commercial partnership in his address to the U.S.-India Business Council’s 41st annual leadership summit.

“India is poised to contribute as a new engine of global growth…we are encouraging foreign and domestic investors to set up the high quality and efficient manufacturing facilities,” he said during his address at the USIBC CEO roundtable in Washington on Tuesday.

“We will continue to make progress on improving the investment climate and ease of doing business,” he added.

On their part, USIBC members said they are on track to invest $45 billion in the next couple of years. 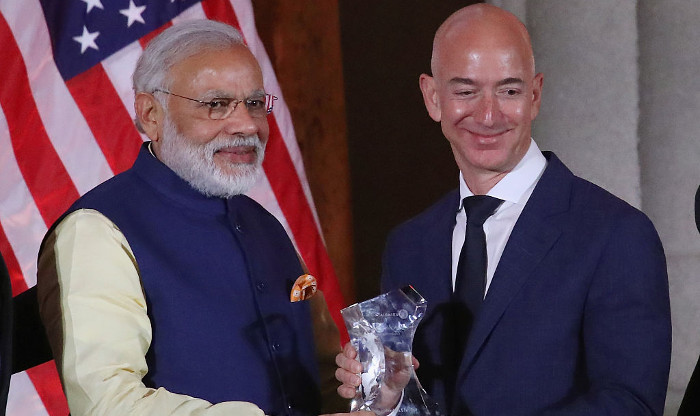 “We are honored to have Prime Minister Modi address the Council’s 41st Anniversary Leadership Summit. Forty-five billion is a good starting point for American companies to invest in India and this number will only go up in the future. This will translate into increased technology transfers and job creation. We are excited to expand the potential opportunities attached to this relationship,” USIBC President Mukesh Aghi said.

The USIBC honored Jeff Bezos, the founder and CEO of Amazon and Dilip Shanghvi, founder and managing director of Sun Pharmaceuticals for their “contribution” to “integrate India” into the global economy. Bezos announced that Amazon would be investing $3 billion in India, taking its cumulative India investment to $5 billion.

Modi began his U.S. trip by placing a wreath at the Tomb of Unknown soldiers and paid homage to Indian-American astronaut Kalpana Chawla at the Arlington National Cemetery in Washington. Also, present at the memorial were Chawla’s family members and astronaut Sunita Williams. 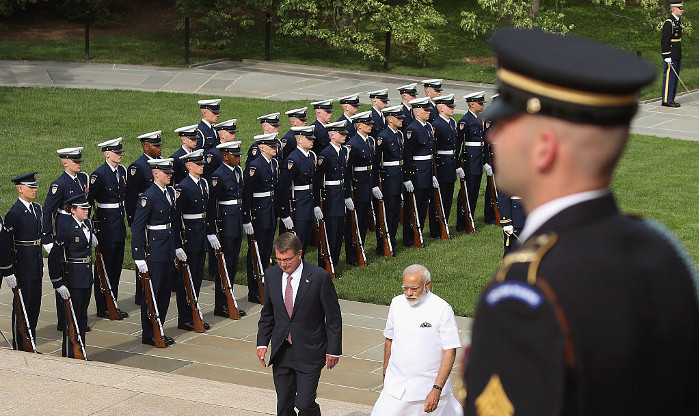 After her brief interaction with Modi, Williams told Press Trust of India, a news agency, that she is honored that PM Modi took the time to acknowledge the shuttle tragedy.

“All of us are very honored that he took the time to come and acknowledge the shuttle catastrophe and the deep cooperation that we have with India in space,” she said.

“Personally, it is commemorating my friend Kalpana Chawla,” Williams said.

Modi spoke with Williams father in Gujarati and invited them to visit India. “With health permitting, I definitely look forward to visiting India,” her father said. He met Chawla’s family including her husband, Jean-Pierre Harrison who presented a set of books on the late astronaut, including a biography written by him.

“The aim of the interaction was to understand from them, how they see global trends in the coming years, the challenges and what U.S. and India could do together for the world, keeping in mind among the templates that the Prime Minister has articulated. What can U.S. and India do together for the world was really the theme,” Indian Ambassador to the U.S. Arun K Singh said.

In a ceremony attended by PM Modi on Monday, the U.S. government announced the return of over 200 cultural artifacts estimated at U.S. $100 million to India. Nearly 15 American museums will be returning stolen artifacts from India in response to a major federal investigation which began in 2012.

Modi met with Attorney General Loretta Lynch to mark the repatriation of the artifacts.

“For some, these artifacts may be measured in monetary terms but for us, this is beyond that. it’s a part of our culture and heritage,” the Prime Minister said at the ceremony held at the Blair House.

The items returned include statues, bronzes and terra cotta pieces, some dating back 2,000 years, looted from some of India’s biggest temples. Among the pieces returned is a statue of Saint Manikkavichavakar, a Hindu mystic and poet from the Chola period (circa 850 AD to 1250 AD) stolen from the Sivan Temple in Chennai. It is valued at an estimated $1.5 million. There is also an 11th Century bronze of Ganesh.