Sara Ali Khan and Ananya Panday were recently spotted at a popular restaurant in Khar, Mumbai. The two were sporting casuals and both kept it comfy yet fancy. These two celebrity kids already have a huge number of fan followers even before the release of their films. There are two films lined up for Sara, Kedarnath and Simmba. Ananya, on the other hand, is being launched by Karan Johar in Student of The Year 2. Also Read - Atrangi Re: Sara Ali Khan's Look Will Remind You of Her Role in Sushant Singh Rajput's Kedarnath

Ananya was seen wearing a black and mustard checkered dress which she teamed it with a sling bag, black sneakers, and a white t-shirt underneath. She was spotted a few days back with Shah Rukh Khan’s daughter Suhana Khan who is too quite a famous star kid. She was spotted earlier wearing white long-sleeves t-shirt, white jeans and white sneakers. She pulled out the whole ‘solid colour’ look like a pro. Also Read - Simmba Actor Ronjini Chakraborty Reveals She Has Been Replaced by a Star Kid: They Wanted a More Well-Known Actor 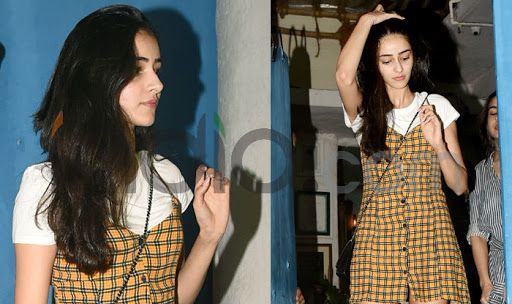 These days star kids are often spotted and are seen in amazing outfits. Their fashion sense at such a young age is highly commendable. While some shy when the paparazzi is around, many flaunt their friendly behaviour with the shutterbugs. Ananya is very co-operative and responds well with the shutterbugs. Also Read - Sara Ali Khan Posts Unseen Photos of Saif Ali Khan And Sushant Singh Rajput From Sets of Dil Bechara

SOTY 2 is slated to release on May 10 2019. Directed by Punit Malhotra, SOTY2 also stars Tiger Shroff and Tara Sutaria in pivotal roles.