Kareena Kapoor Khan Officially Declares Her Star-Status by Wearing a ‘Celebrity’ Printed t-Shirt in a Way Only Bebo Can; See Pics

Mommy of one, Kareena Kapoor Khan has maintained her figure and at the same time makes sure that she styles herself in the most comfortable way. Earlier today, Kareena was spotted at a shoot for a radio channel at Mehboob Studios in Mumbai. She was seen wearing a stylish white polka dotted dark blue pencil skirt which she teamed it with a purple t-shirt that has “celebrity” written on it and white pointed stilettos. Also Read - After Quitting Acting, Imran Khan Spotted in Mumbai, Fans Say 'Come Back To Movies'

Not all can carry off a polka dotted outfit but Kareena, just like always took out the most out of her outfit and looked like a diva. Also Read - Kareena Kapoor Khan Tries Her Hands at Pottery With Taimur in Rs 2k Striped Sweater 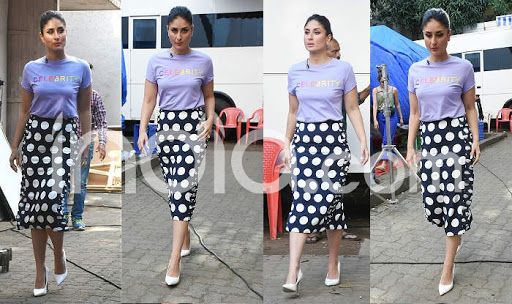 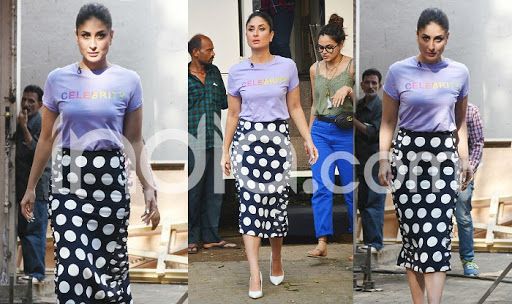 Recently Kareena’s Ganesh Chaturthi pictures where she was seen along with her son Taimur Ali Khan and other family members were taking the internet by storm.

On the professional front, Kareena was last seen in Veere Di Wedding that did great at the Box office. She has signed Good News alongside Akshay Kumar, Diljit Dosanjh and Kiara Advani. The actor will also be seen in Karan Johar’s Takht which also features Bhumi Pednekar, Vicky Kaushal, Anil Kapoor and Janhvi Kapoor in pivotal roles.