Priyanka Chopra – Nick Jonas Wedding: Bride Opens up on Her 75-Foot Long Veil, Says She Always ‘Wanted The Longest Veil in The World’

Priyanka Chopra and Nick Jonas who tied the knot at Udaipur’s Umaid Bhawan Palace Hotel are the latest talks of the town. The couple has been making headlines ever since they started dating. In so little time, the couple left everyone surprised by announcing their wedding. They got married in two ceremonies – Christian and Hindu ceremony. The Christian wedding was held on December 1 while the Hindu wedding was held on December 2. After their wedding, all their fans were eagerly waiting to see their wedding pictures and finally, People Magazine shared the snaps of the bride and groom in their designer outfits.

For their Christian wedding, the couple twinned in Ralph Lauren and for the Hindu wedding, both Nick and PeeCee donned Sabyasachi Mukherjee custom-made outfits. Undoubtedly, the bride looked dropped dead gorgeous in both the outfits. The most unique part of her wedding gown was her 75-foot long veil. That was the most highlighted part of her whole look. 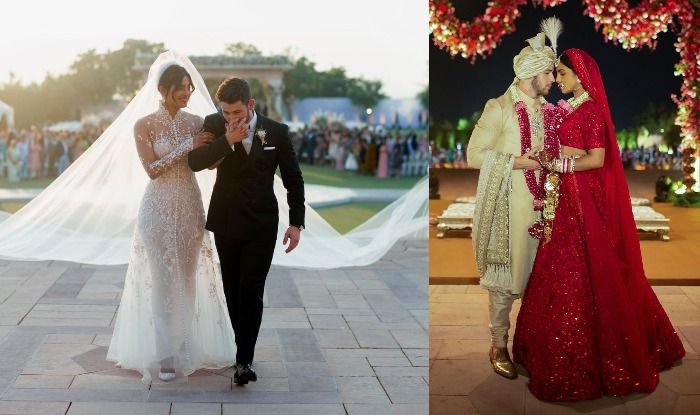 During her first interview post marriage with NDTV, Priyanka spoke about her bridal gown and said, “It wasn’t about fashion. I wanted something unique. Both the dresses – red and white – were personalised for me… I wanted the longest veil in the world and I got that. The outfits were personal choices”.

Priyanka and Nick hosted their Delhi reception yesterday, December 4, where Prime Minister Narendra Modi was also spotted. He was seen enjoying a great laugh with the newlyweds.