Emmys 2020 Photos: Check Out The Best And Worst Fashion Moments From The Virtual Red Carpet

Let's see who dressed up or down for the Emmy Awards 2020.

September 21st became a historical day for the Hollywood entertainment industry when one of the most glamorous awards, Emmys turned virtual and various Hollywood A-listers from 10 different countries attended the event virtually through a zoom call. From designer gowns to casual t-shirt and comfy pajamas, celebrities showed up in their best to worst attires. No matter what they wore, everyone made headlines. Jimmy Kimmel was the host of this fascinating event that featured record-breaking nominees including 160 nominations for Netflix. Let’s see who dressed up or down for the Emmy Awards 2020.Also Read - Emmys 2020 Surprising Moment: FRIENDS Reunion With Rachel, Monica And Phoebe - Watch!

She looked glamorous in a black Dior dress and presented the first award of the night. 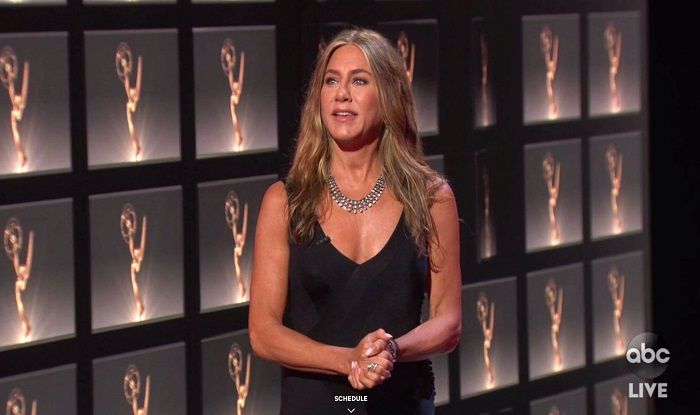 Jameela Jamil wore a rainbow sequined robe from Markarian NYC over a white pajama set. She posted her picture in this attire on Instagram and captioned it, “No bra? No heels? NO PROBLEM.”

No bra? No heels? NO PROBLEM. Wearing PJ’s to the 72nd Emmy awards (from my house) is my kind of vibes. Excited to see if we win any of the 7 awards we have been nominated for!!!! I still did my make up and wore a sequin dressing gown, because… It’s what Tahani would have wanted. And this is her day, not mine. ❤️

Mark Duplass donned a tuxedo jacket over a flannel pajama shirt for the Emmys 2020. He shared his look on Instagram with a post that reads, “Tonight’s look brought to u by old ass tux jacket from CYRUS awards season and Target’s limited Clark Griswold Christmas Jammies collection.”

Tituss Burgess looked hot in a red coloured matching set from the Lee Rickie Collection. He paired the outfit with shoes by Giuseppe Zanotti.