Food Review: There’s a new Glocal Junction in town and we tried out their food and drinks

Is the new Glocal Junction in Worli worth your time and money? Find out!

Restaurateur Sanjay Vazirani’s Glocal Junction just made its town debut in probably one of the most sought-after locations in Worli- the Nehru Center. The new eatery occupies a huge space on the prime property, in the Discovery building. This Glocal, like the one in Andheri, is also based on the concept of creating a space that serves the thoroughly globalised Indian, who also likes the comfort of her desi roots. The pub has a casual and chilled out ambiance and if you’re looking for a place to have a relaxed and long-winding conversation with a long lost friend over a lazy brunch or dinner on the weekend, the Worli Glocal is one of your best bets. Also Read - Another Spike! Maharashtra Registers 10,066 Fresh Covid Cases in Last 24 Hours, 163 Deaths 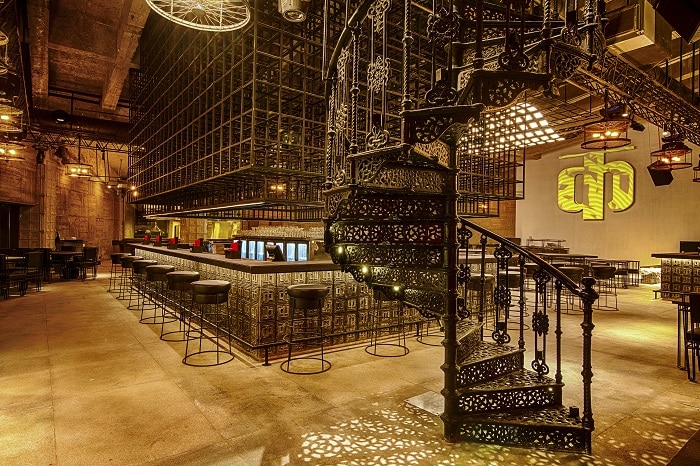 The decor of the Worli Glocal is pretty much the same as the one in Andheri, with the exception of the al fresco dining area which is missing here. The restaurant has a capacity of 300 guests and the seating arrangement has been made keeping in mind the differing needs of the wide array of people that the restaurant caters to. So, there are private booth areas, as well as long tables for accommodating large groups. The bar is in the center of the restaurant, which looks like an all-in-one space for parties, casual family luncheons and work meetings. ALSO READ: Baroke: A lounge in Mumbai that takes you back in time! Also Read - 21 Cases of Delta Plus Variant Found in Maharashtra so Far, 2 in Mumbai 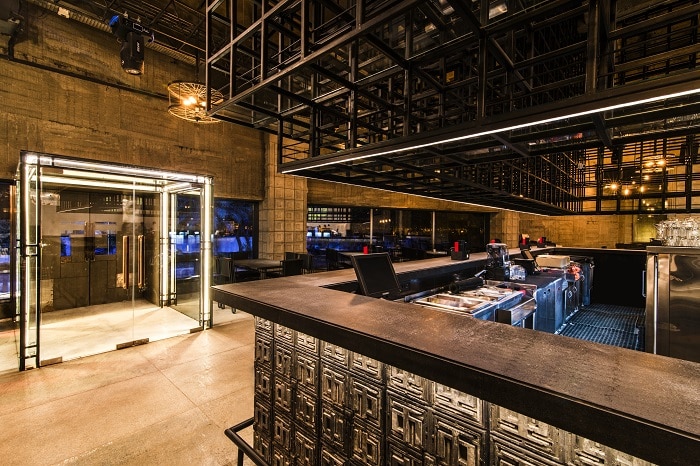 The ambiance is laid back and one can comfortably think about spending two to three hours on an average in the restaurant. The music is peppy and contemporary. While we were there, the DJ was playing some amazing covers of the current international hits since it was in the afternoon, and that added to the spirited vibes of the place. 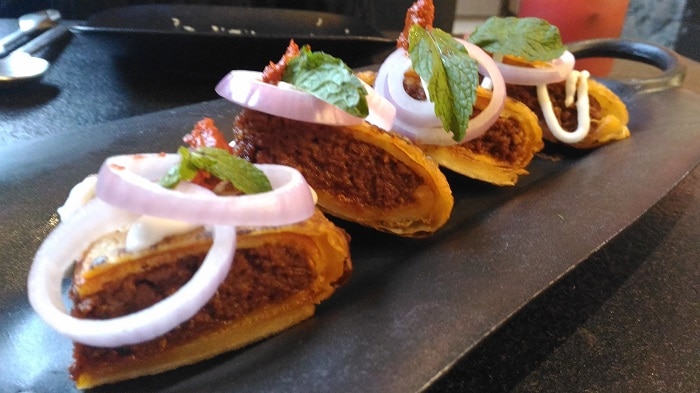 Chef Rohan D’souza has crafted the menu such that people will get to experiment, and also choose from a bunch of dependable and classic global and Indian dishes. With this very aim, all the sections in the Worli Glocal menu have a mix of old classics as well as experimental dishes from various parts of the world. ALSO READ: Restaurant review: Is the newest Social in Mumbai really worth your while? 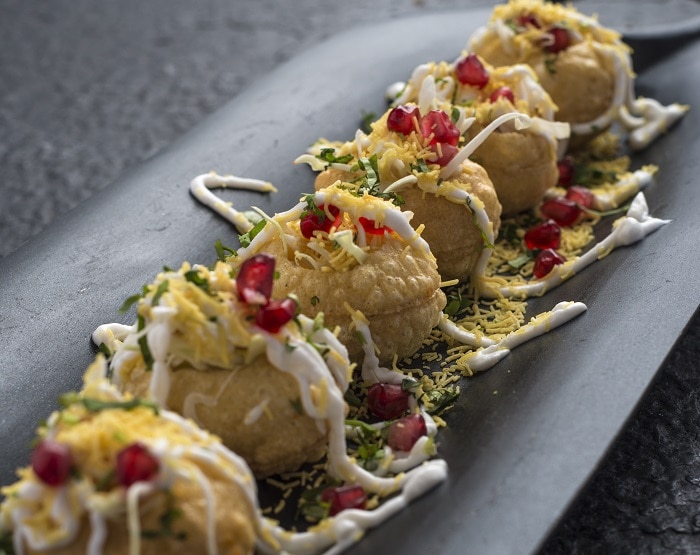 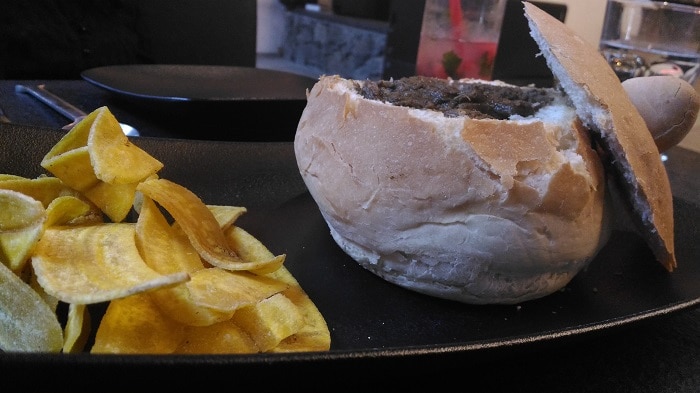 All three starters were lip smackingly good, but what impressed us the most was the Doner Puri, which is a signature dish of Glocal. Who knew that the marriage between the Indian puri and the lebanese shawarma will be such a winner! Murtabak was delicious too, with melt-in-the-mouth minced lamb blanketed by perfectly crisp golden bread, served with onion rings. The Pandi Curry Bunny Chow consisted of a Coorg-style pork curry, soured with special tamarinds called gamboges, nestled inside a bread bowl. The pork was tender and the curry itself was tasty and incredibly flavourful, but the bread was not adequately moist and hence, didn’t seem to go so well with the pork. 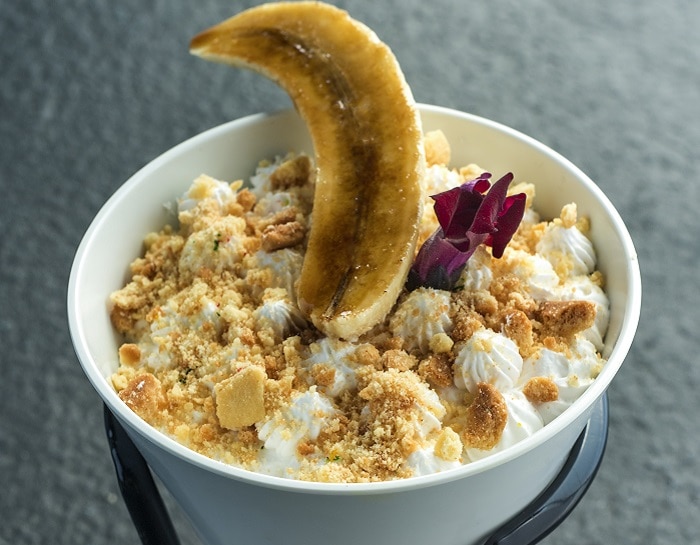 We were excited for desserts as the Worli Glocal has two new additions besides the masala chai panacotta and Kalkatta Paan Cheese cake that are available at the Andheri branch. We ordered the Deconstructed Bananoffee Pie and the Chocolate Mousse with Edible Soil and were more than delighted to find out that both the desserts were incredibly delectable. ALSO READ: These are the hottest new restaurants and bars that will open in Mumbai in 2017! 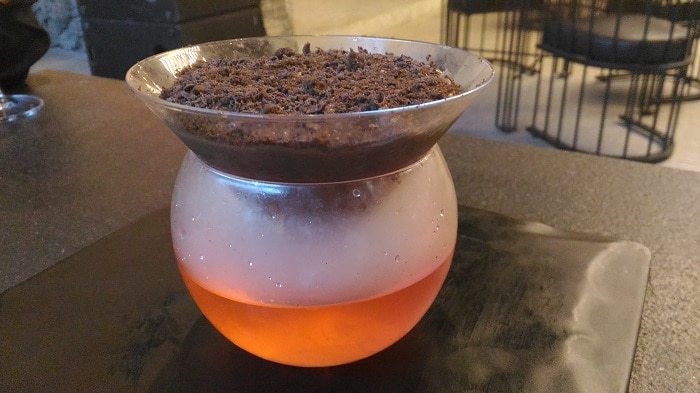 The pie was served in a cone with alternating layers of banana, toffee, cream and crumbled biscuits and finished with a caramelised banana. It was light, creamy and flavourful. The mousse was soft and gooey and the edible soil added a surprisingly much-needed crunch to it. 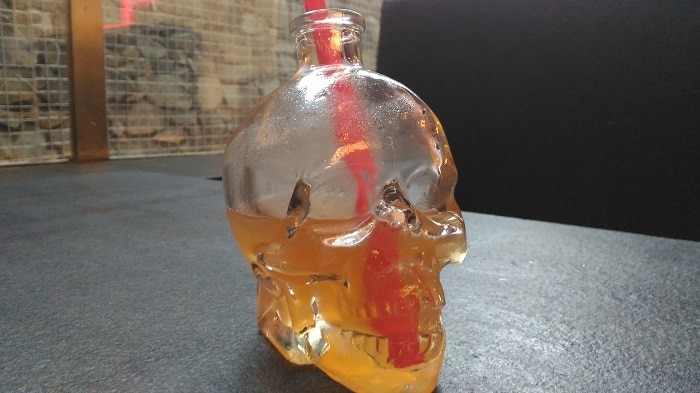 The mixologist at Glocal prepared some great cocktails for us. We tried out their signature Kakushin cocktail (Akashi white belended whisky, gari ginger, Yuzu fruit juice, honey and bitters) that was served in a skull shaped glass and had a smokey bitter sweet taste, enhanced by the ginger flavour. Then there was the infused jar (vodka with apple juice, cinnamon and sweet and sour mix) that was sweet and extremely flavourful and was the second best drink we had there. ALSO READ: This newly launched retro theme Bandra bar is also a funky work station, a library and a gaming hub! 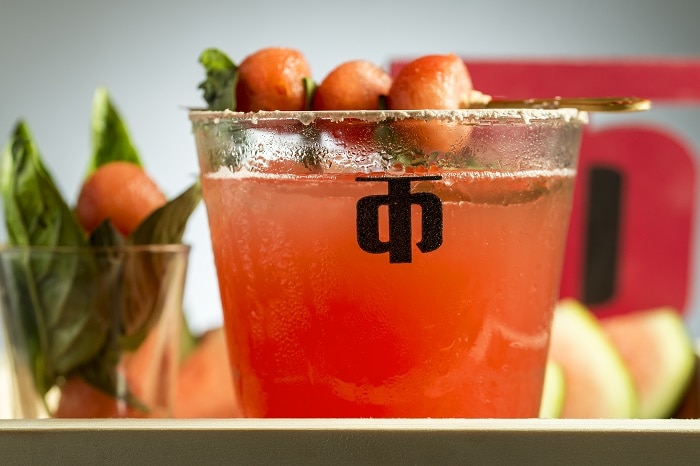 The toxic box with vodka, litchi, galangal and lemon grass was a little too bitter for our taste, and finally the refreshing Watermelon and Basil Smash was fruity and just the perfect summer cocktail you can ask for. Overall, cocktails here are pretty amazing.