Walia called off the marriage through a series of text messages after the man gave her an ultimatum – him or the dog.

She had a bone to pick with her would-be husband – and now he’s in the doghouse. Also Read - Unwarranted And Ill-informed: MEA Reacts to Justin Trudeau’s Remarks on Farmers Protest in India

Yesterday, Karishma Walia, an Indian woman who currently works as an analyst with Deloitte in Gurgaon, broke the internet after Buzzfeed reported that she turned down an arranged marriage with a well-to-do man from New Delhi. Also Read - COVID-19: India's Daily Cases Drops To 38,772, Over 45,000 Recoveries Reported In Last 24 Hours

The reason? He told her she needed to get rid of her beloved canine companion.

According to the viral post, which has already been viewed nearly 1.2 million times, Walia called off the marriage through a series of text messages after the man gave her an ultimatum – him or the dog.

Naturally, she picked her furry friend, a cute pup by the name of Lucy.

“My mom thought he’s an excellent match because he’s good-looking and well-off,” Walia told BuzzFeed. “There was a lot of family pressure, and they still think I did the wrong thing by raising the concern about my dog.”

The unnamed man wasn’t too fond of the idea of sharing his wife, according to the message screenshots featured in the post. 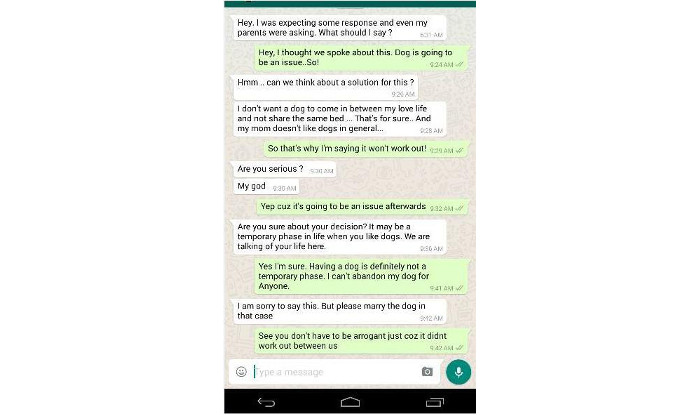 “I don’t want a dog to come in between my love life and not share the same bed… That’s for sure…And my mom doesn’t like dogs in general,” he reportedly texted Walia.

She responded to his text just one minute later, letting him know that it “won’t work out!”

But the man still didn’t let up.

“Are you sure about your decision? It may be a temporary phase in life when you like dogs. We are talking of your life here,” he reportedly told her via text.

Little did he know he was barking up the wrong tree. 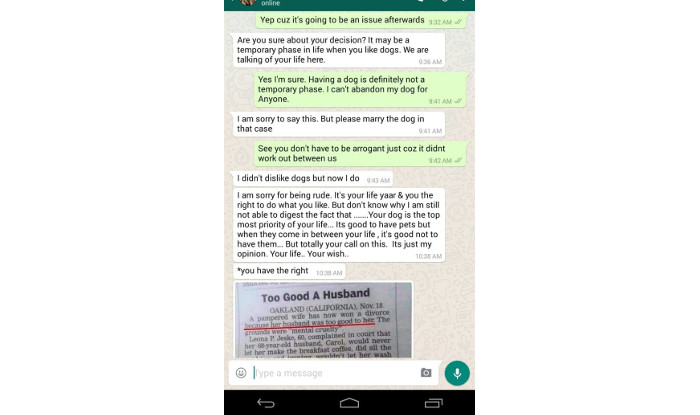 “Yes, I’m sure. Having a dog is definitely not a temporary phase,” she responded. “I can’t abandon my dog for Anyone.”

The man bitterly told Walia that she should “marry the dog in that case.” And the internet jumped quickly to her defense.

“How the hell is liking dogs a “temporary phase? Guy’s an ass. Not for not liking dogs, but for acting like her interests didn’t matter,” one Facebook user wrote. His comment had more than 1,600 “likes.” 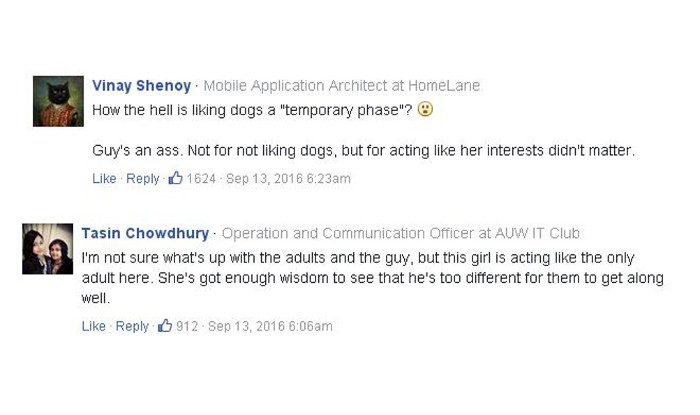 “I’m not sure what’s up with the adults and the guy, but this girl is acting like the only adult here. She’s got enough wisdom to see that he’s too different for them to get along well,” another Facebook user commented. Her comment received another 912 “likes.”