Janhvi Kapoor, who made a promising debut this year with Shashank Khaitan’s Dhadak alongside Ishaan Khattar is all set to begin her New year on a fruitful note. The star kid will be featured on the cover of leading fashion magazine, Cosmopolitan for the January issue. In the cover picture, she is seen dressed in a shimmery silver dress teamed up with a sparkling jacket. She has kept her hair short and has adorned minimal makeup. Well, the youngling definitely looks gorgeous in the new look.

Janhvi is one Bollywood actor who can carry any outfit with certain poise. Everytime the actor steps out of the house, she surely makes heads turn. She also enjoys a massive fan following and always impress fashion police with her sartorial choices.

From walking the red carpet in style to effortlessly pulling off traditional attire, there is nothing that doesn’t look good on Janhvi. She recently appeared on Karan Johar’s celebrity talk show, Koffee With Karan with her brother Arjun Kapoor and spilled many funny secrets. 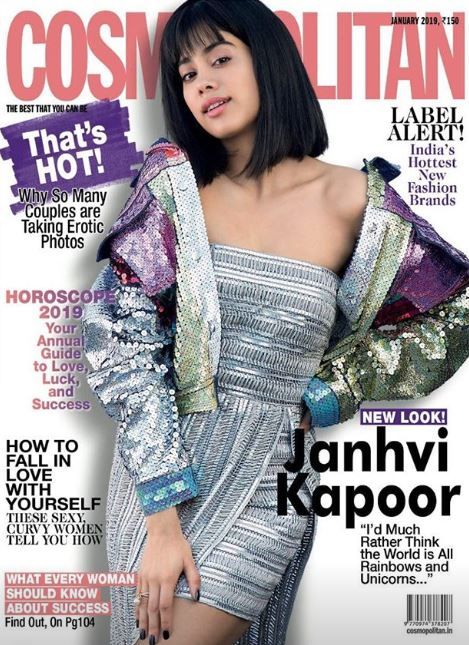 Speculations have also been rife that the actress has also given her nod to the biopic on pilot Gunjan Saxena, who helped in the evacuation of injured soldiers from Kargil in 1999. Nothing official has been said on the same but seems like Janhvi has started preparing for her role. Recently, a picture of hers disguised as a pilot surfaced on the internet and it seems like the actor is choosing her project carefully at the beginning of her career.

A couple of days back, she was seen in Isha Ambani and Anand Piramal’s pre-wedding ceremony. She sported a black and beige gown. Styled by stylist Tanya Ghavri and costume designed by Reem Acra, she looked drop-dead-gorgeous as ever.

Dhadak is the remake of Marathi film Sairat and did decent business at the box office. She will also be seen in Takht with Ranveer Singh, Kareena Kapoor Khan, Alia Bhatt, Vicky Kaushal, Bhumi Pednekar and Anil Kapoor. Karan’s directorial is slated to release in 2020.