Kareena Kapoor Khan has always been steadfast when it comes to her workout routine. From doing Pilates, kickboxing, yoga or a mix of HIIT, she gives it all to her intense workout regime.

Mumbai: Actor Kareena Kapoor Khan has always been steadfast when it comes to her workout routine. From doing Pilates, kickboxing, yoga or a mix of HIIT (high-intensity interval training), she gives it all to her intense workout regime. Taking to her Instagram stories, she shared a glimpse of her intense workout. In the video, she can be seen clad in a black sports bra and matching tights. With no makeup, she tied her hair in a ponytail.Also Read - Inside Kareena Kapoor Khan’s Birthday Party: Bebo Cuts Gorgeous Fruit Cake With Jeh in White Dress

Sharing the video, she wrote, “Getting their each day at a time..with my trainer @getfitwithsid_official. (sic)” Also Read - Kareena Kapoor Khan Gets The Sweetest Birthday Wish From Sara Ali Khan, See Family Pic

Check It Out Here: 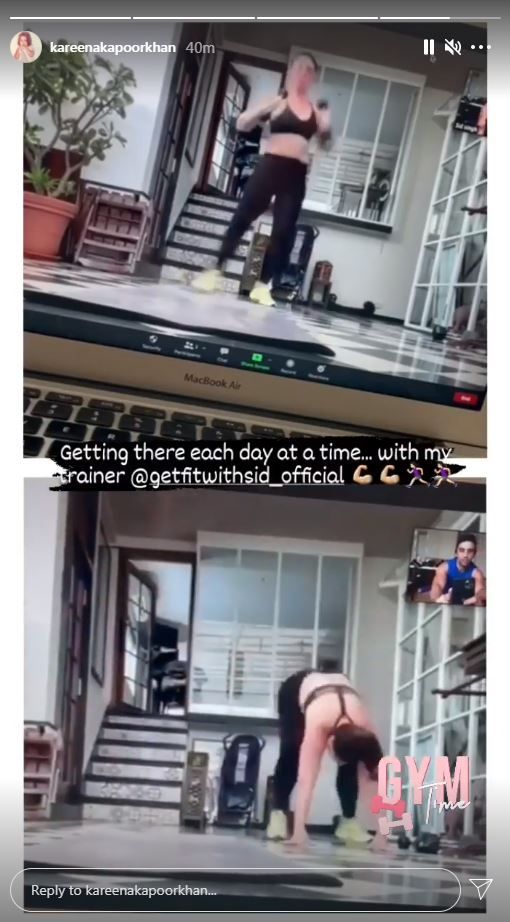 Kareena often shares glimpses of her workout routines with the fans. After giving birth to her second child Jeh, she seems determined to get back into a perfectly toned shape. Also Read - Happy Birthday Bebo: 6 Times Kareena Kapoor Khan Broke Stereotypes

Meanwhile, she recently launched her book ‘Pregnancy Bible’. The actor welcomed her second child earlier this year and now she has come out with the experiences she had during both her pregnancies. Unveiling the first look of the book cover, she revealed that she had good and bad, both the days when someday she would get desperate to get to work and some days she struggled to get out of bed. She also revealed that the book has the first-ever photo of her little baby.

On the work front, Kareena will be next seen in Laal Singh Chaddha co-starring Aamir Khan. Helmed by Advait Chandan, the film is a remake of Tom Hanks’ Forrest Grump. The film is scheduled for a theatrical release this Christmas.