Malaika was spotted by the paparazzi in Mumbai’s suburbs outside Yashmin Karachiwala’s studio for her pilates class.

Actor Malaika Arora is a fitness freak. She is often papped by the shutterbugs outside the gym, airport, restaurants, walking her dog, or visiting a doctor’s clinic. Malaika makes sure that she always puts her stylish foot forward. She was spotted by the paparazzi in Mumbai’s suburbs outside Yashmin Karachiwala’s studio for her pilates class. Malaika opted for an orange sports bra and bra for her gym class, she looked fiery hot! Also Read - List of People NOT Invited to Varun Dhawan-Natasha Dalal's Wedding in Alibaug on Sunday 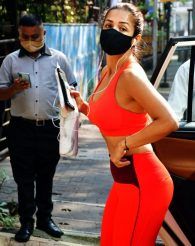 She teamed up her look with black and orange sports shoes from the brand Reebok’s Zig Kinetica range. The shoes are worth Rs 11,999. Also Read - Priyanka Chopra Jonas’ DIY Zoom Glam Tutorial is Quick and Easy- Watch Video

Check out Malaika’s look here: Also Read - Deepika Padukone all Set For Her Second Hollywood Venture as She Signs With Talent Agency ICM

Malaika tied her hair in a simple plait and sported a black facemask. 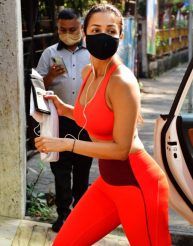 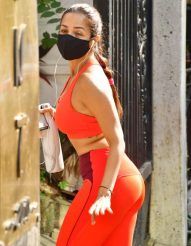 The actor keeps treating her fans with the latest post and often shares home remedies to keep her fans hooked to her social media page. She was recently in the news when Malaika shared a cute post with beau Arjun Kapoor from their Dharamshala trip. She wrote, “Never a dull moment when ur around …..” (sic)

Malaika can be seen in a green co-ords wrapped up in Arjun Kapoor’s arm. The couple share a romantic moment together and it seems like this pic is captured by Bebo. While Arjun wore a grey sweatshirt and black pants with black boots.

Malaika Arora traveled to Dharamshala where Arjun Kapoor was shooting for his forthcoming film, Bhoot Police.

Malaika is currently seen as a judge on the dance reality show India’s Best Dancer.