New Rs 2000 note to be introduced in India after banning old Rs 500 & 1000 notes: Pictures of 8 best looking currency notes across the globe

Along with new 2000 rupees note of India, take a look at the pictures of other beautiful currency notes across the globe.

On November 8 evening, Reserve Bank of India governor Urijit Patel and senior government officials unveiled the new currency note of Rs 2000 and redesigned Rs 500 note. The surprising introduction of new 2000 rupees currency note came while addressing a press conference shortly after Prime Minister Narendra Modi announced the scrapping of existing Rs 500 and Rs 1000 notes from midnight. Like every country boasts of a unique currency and India did not disappoint when they made this major announcement. Keeping the culture, history and events in mind, the currency design of Rs 2000 note retains the image of Mahatma Gandhi on one side while the another side has Mangalyan launch, an apt representation of India’s scientific and research development. But what sets these new notes apart are the Micro Nano GPS chip that can help track the exact location of the note via a satellite proving a potential threat to black money holders. On the occasion of the introduction of new Indian currency note, we take a look at the pictures and a brief description on some of the most beautiful currency notes across the globe.Also Read - PM Narendra Modi's Name Proposed For World Peace Commission, UN Chief And Pope Francis Contenders

New Zealand five-dollar note was honoured with the title of ‘banknote of the year’ in 2015 by the International Bank Note Society. The five dollar bill featuring Sir Edmund Hillary was praised for its ‘stunning orange and brown’ design along with the ‘gorgeous polymer window’. The New Zealand currency also showcased one of the best security features like micro-printing, intricate background patterns and fluorescent feature to fight off counterfeiting.

Australia’s national currency, the Australian dollar comes in denominations of $5, $10, $20, $50 and $100 notes. The country became the first in the world to have a complete series of polymer (plastic) notes providing it much greater security against counterfeiting. Depicting famous Australians on the interesting, colourful notes like 100 dollar bill features famous soprano Dame Nellie Melba and civil engineer and Australian military commander General Sir John Monash or 50 dollars note which has inventor and preacher David Unaipon and first female parliamentarian Edith Cowan.

One of the attractive banknotes in the world is 50 dollar note of Trinidad and Tobago. The national symbol, Trinidad and Tobago Coat of Arms positioned to the left, a large red hibiscus in the centre along with a little gold-green iridescent hibiscus which changes colour as you move the note around, Children’s Carnival masquerader and Red-capped Cardinal bird visible on both sides to celebrate 50th anniversary of the Central Bank of Trinidad & Tobago makes this note a must have in collectibles.

There might be no subdivisions of a shilling now, but that does not take anything away from the eye-catching note of 50,000-shilling. Chosen as ‘Banknote of 2010’ by the International Bank Note Society’s (IBNS), the banknote consisted of strong design elements. Right from an outline of a map of Uganda to the illustrations of silver back mountain gorillas, along with the proper use of colours concerning brown with golden highlights made this Ugandan shilling a masterpiece.

The Krona is the national currency of Iceland, and their 5000 Krona banknote depicts the picture of Ragnheidur Jonsdottir. The Central Bank Of Iceland used the image to represent Icelandic women and their contribution to the rich culture of the country. The eight-pointed stars highlight Jonsdottir who was famous for making embroidered alter clothes for Laufas church in northern Iceland in the background. 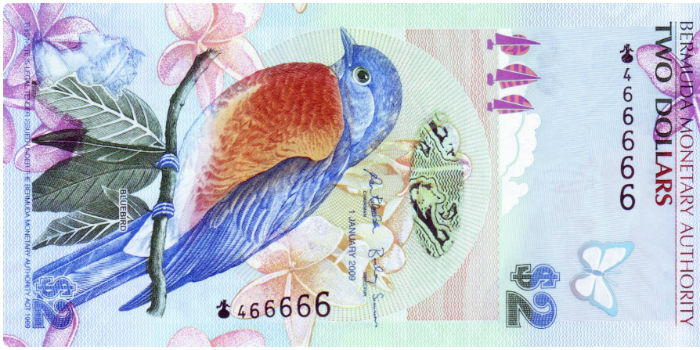 Another interesting currency design to admire is Bermuda’s 2 dollar bill. The main attraction of the banknote is Bermuda Bluebird on the front and the Dockyard Clock Tower and Statue of Neptune on the reverse side. Despite having a low face value, there is no deficit in excitement around the note which was released as a part of new series in 2009. It was designed to coincidence with the 400th anniversary of the Bermuda’s settlement and the Bermuda Monetary Authority’s 40th anniversary. 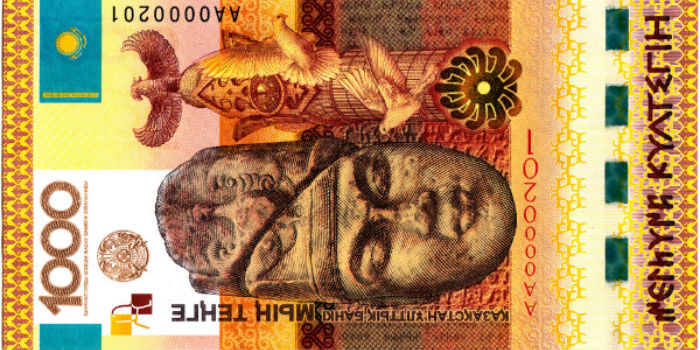 In 2013, the prestigious award ‘Bank Note of the Year’ was given to the 1000 Tenge denomination Kazakhstan note. Tenge, the official currency of Kazakhstan was chosen to be the best in a stiff competition featuring 50 world currencies. The charismatic design is dedicated to the “Kultegin – the Monument of the Turkic Runic Writing” whose effigy is present in vertical format. The highlight of in the reverse side is petroglyphic drawings of Turkic warriors. 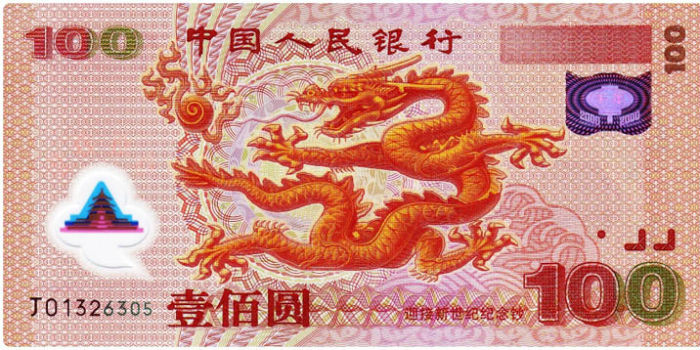 To commemorate the new millennium in 2000, the People’s Bank of China issued issued an orange polymer note (China’s only polymer note til date) with a face value of 100 yuan. The banknote had a wild dragon and fireball on one side while the other side featured China Millennium Monument. Some of its security features included a shadow image of ‘2000’ above clear window which contains a red and blue image of a pagoda. There are intricate designs and patters present in the background of both sides to fight against counterfeiting.