PM Narendra Modi with his mother Heeraben Modi: 11 cute pictures of this adorable son-mother pair will leave you with a big smile!

Seeing your child reach for the stars is the most satisfying moment for any mother. And the exuberance remains same for 97-year-old Heeraben Modi, mother of the Prime Minister Narendra Modi. Supporting her son’s demonetization decision, Heeraben made a visit to a bank at her village near Gandhinagar. Pictures of Heeraben Modi in a queue are flooding the social media. PM Modi who is leading India’s biggest ever crackdown on corruption announced major shocking reforms – from ban on Rs 500 and Rs 1000 currency notes to introduction of new Rs 2000 notes. The unexpected move which is hailed by the countrymen has also come under scanner for its poor management. But his mother’s show like any commoner is seen as a sign of solidarity in the country in the testing times.Also Read - Breaking News LIVE: Myanmar's Ousted Leader Aung San Suu Kyi Sentenced to 4 Years in Prison

Accompanied by relatives, Heeraben visited a branch of the Oriental Bank of Commerce at Raisan village on Tuesday morning to exchange her Rs 500 notes. Sitting in a wheelchair waiting for her turn, Heeraben Modi displayed composure supporting her son’s vision of corruption free India. She filled necessary forms filled and got currency notes worth Rs. 4500 exchanged. After receiving the new Rs 2000 currency note, Heeraben also posed gleefully for the cameras outside the bank. It was an iconic moment to see Prime Minister’s mother at the age of 97 years to show steely grit and courage. Also Read - Kashi Vishwanath Corridor Project: How PM Modi’s Dream Project Will Boost Religious Tourism | SEE PHOTOS

This is not the first time the nation is hearing of Prime Minister’s mother. Heeraben, a simpleton at heart living with her younger son Pankaj Modi, a senior Gujarat government officer, in Raisan on the outskirts of Gandhinagar is regularly talked about in media. Despite being the mother of a renowned figure in world politics, she prefers living a simple life which includes travelling in public transports. Yes, for her regular medical check-ups, Heeraben opts to visit Gandhinagar civil hospital in an auto rickshaw. In a country like India where a person with modest political connection does not shy away from showing off the riches and services, we have Heeraben who does not want more than required from her Prime Minister son’s comfort. Also Read - Cyclone Jawad To Hit Odisha, Andhra Pradesh Tomorrow, NDRF Deploys 64 Teams in 3 States | Key Points 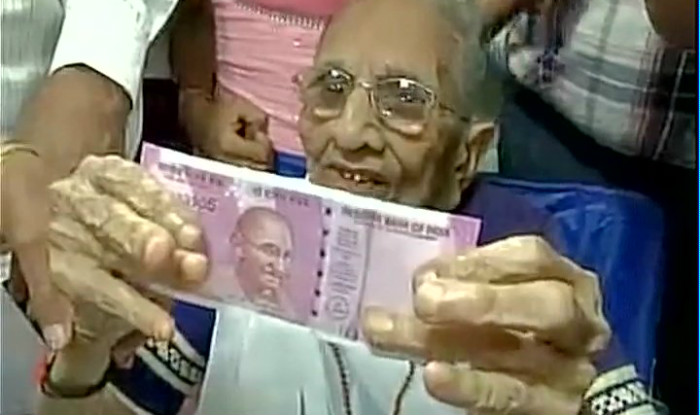 Modi’s epic journey from a chaiwala to becoming the Prime Minister of world’s largest democracy has been read, written, recited and talked about on numerous occasions. The world leaders applaud the 66-year-old who has pinned India on the world map. From United States President-elect Donald Trump using NaMo’s name and slogan to win the presidential elections to Japan Prime Minister Shinzo Abe approving of Modi’s tactics, the world is falling head over heels in love with our Prime Minister. As for Narendra Modi who is globetrotting throughout the year, it is his mother’s blessings which bring him true happiness. Be it the meeting with Facebook founder Mark Zuckerberg or his birthday celebrations, the special occasions remain incomplete without the presence or mention of his mother, Heeraben. Let us take a look at some cute moments shared by this sweet mother-son duo, Heeraben and Narendra Modi through this pictures post. 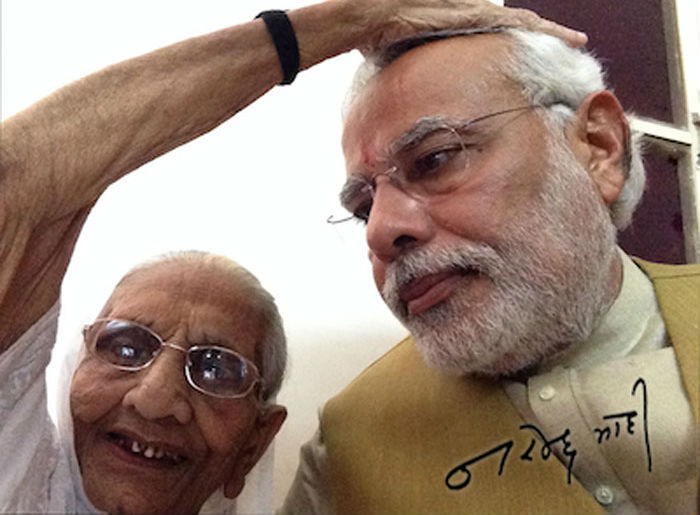 Our honourable PM’s love for selfies is no secret but this one with his mother from the election days in 2014 gets a special mention. Modi who tweeted a selfie with his mother Heerba with the caption “Sought blessings from my Mother,” was re-tweeted more than 5000 times in less than hour of posting. Despite the selfie getting Modi in trouble with the Election Commission, it definitely earned an iconic place in the Prime Minister’s life. 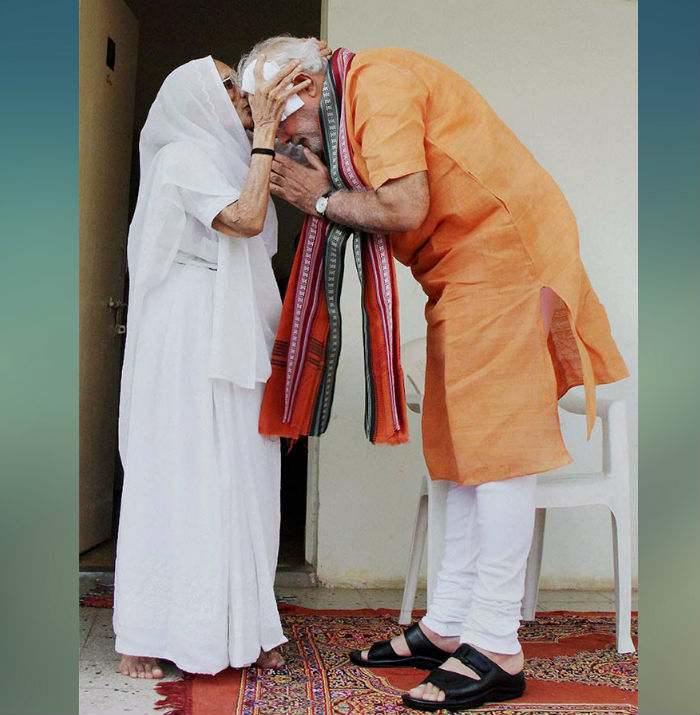 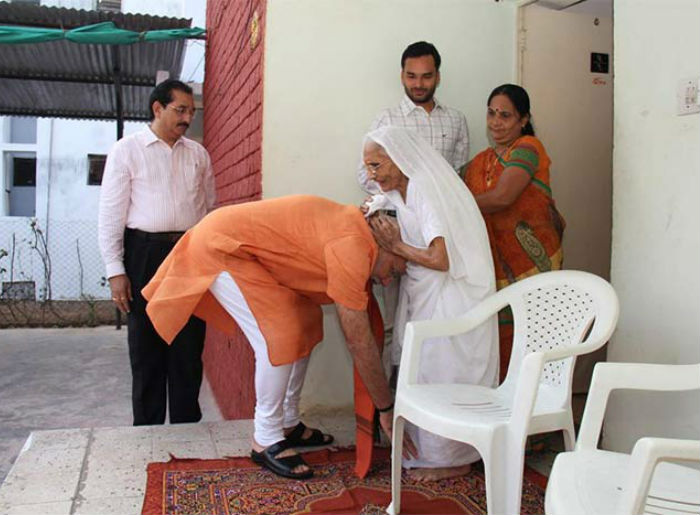 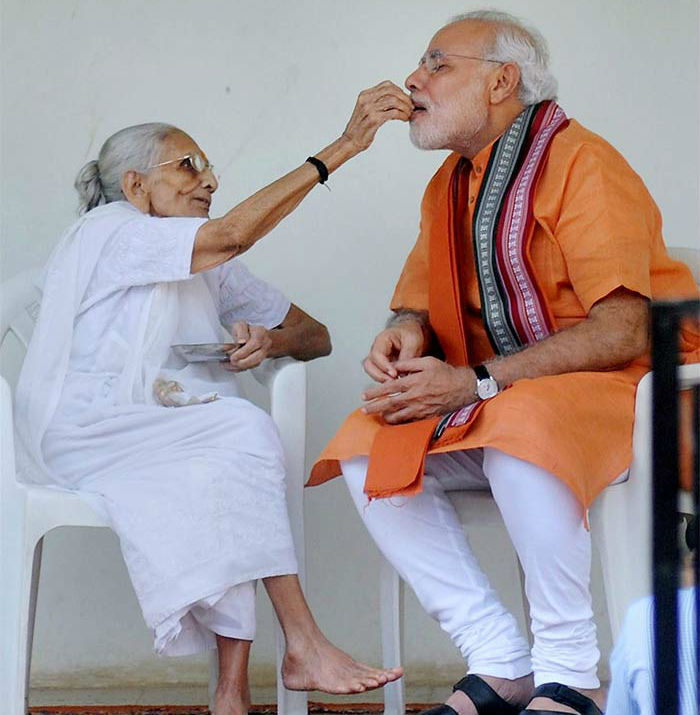 On September 17, 2014 marking his 64th birthday, Prime Minister Modi visited his mother in her Gandhinagar residence after driving 23 km from Ahmedabad in a single vehicle ditching the security. This was also his first visit to Gujarat after becoming the Prime Minister in 2014. It was a heartwarming moment for the mother-son pair as Modi touched her feet and sought blessings from Heeraben. She gifted him Rs 5000 as the birthday gift which he later donated to the Prime Minister’s Relief Fund for Jammu and Kashmir. Aww, don’t they make our hearts melt and eyes misty. 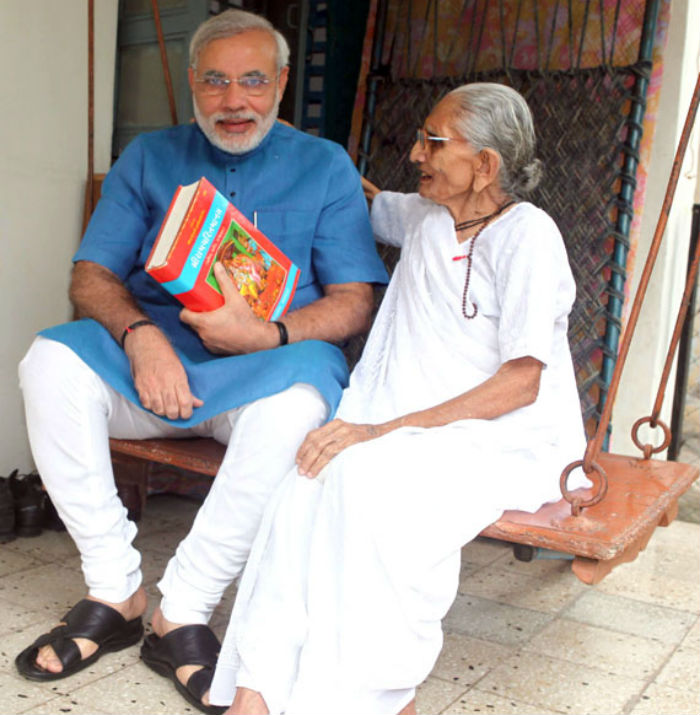 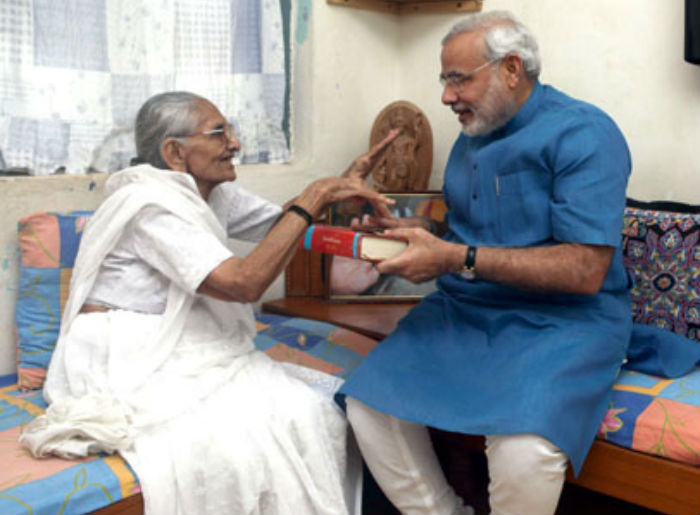 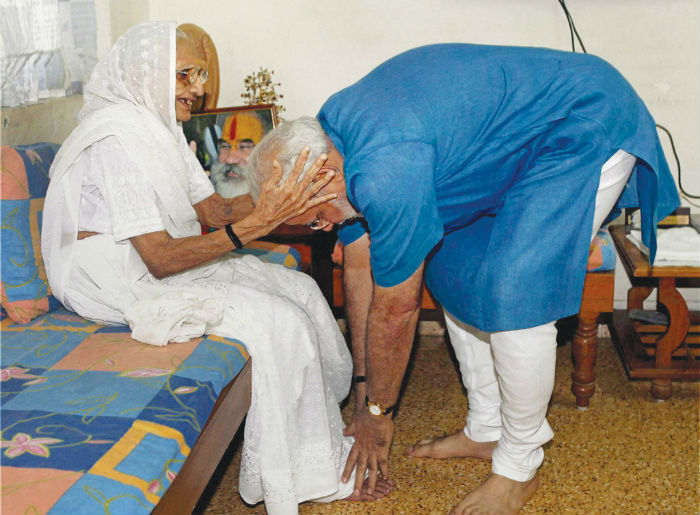 The pictures are from his pre-prime ministerial days when Modi celebrated his 62nd birthday with his mother. The longest-serving Chief Minister of Gujarat who makes a point to seek blessings from his mother on his big day also had started Sadbhavana Mission or Goodwill Mission. Observing fast for three days in Ahmedabad from September 17, his birthday, Modi was joined by religious heads in big numbers. 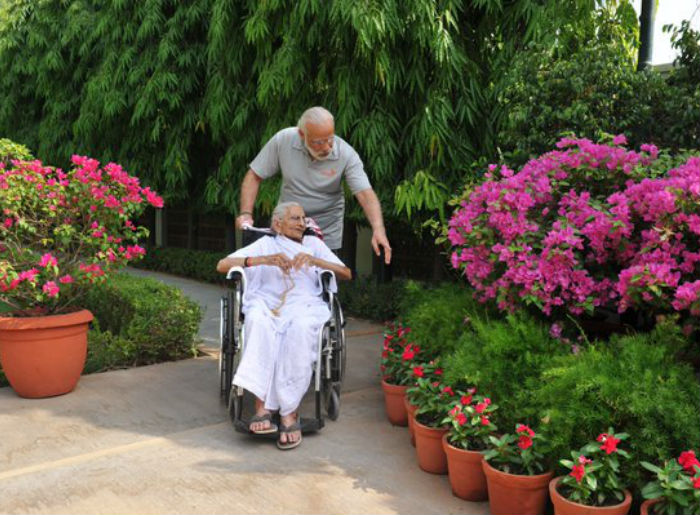 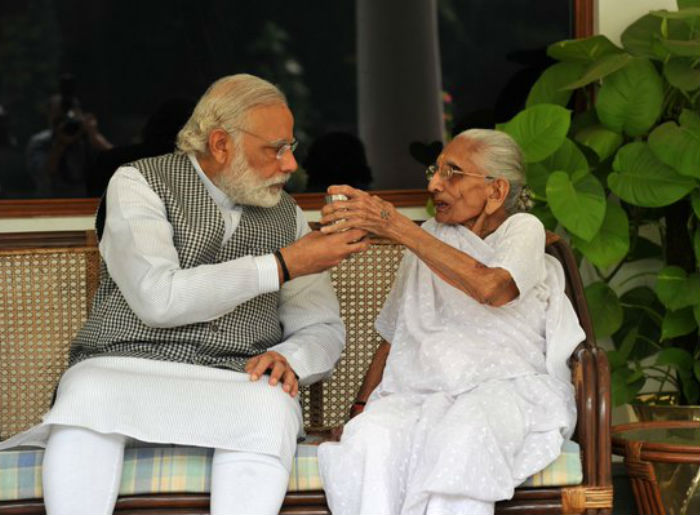 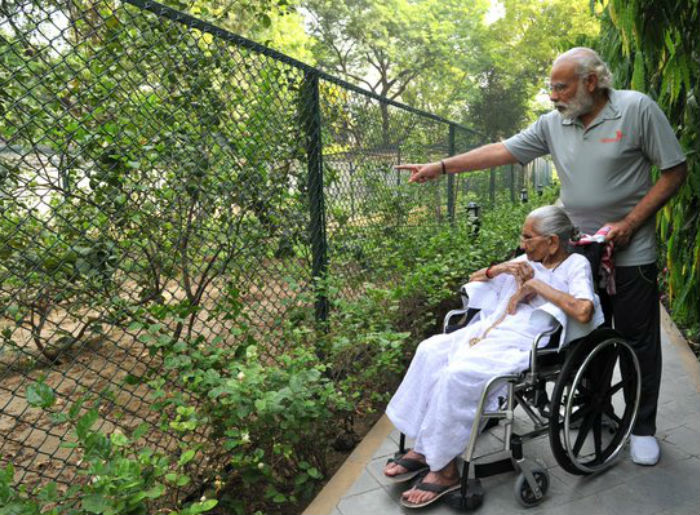 Like an enthusiastic son, PM Modi posted pictures of his proud mother Heeraben’s first visit to his Race Course Road residence in Delhi. Along with three photographs which showed Modi spending quality time with her mother, the caption “My mother returns to Gujarat. Spent quality time with her after a long time & that too on her 1st visit to RCR,” said it all. Ditching his crisp formal kurta pyjama attire, Modi is seen wearing grey T-shirt and black track pants as he showed his mother the gardens of his house.

Modi and his mother epitomise the strong bond between a mother and son. His breaking voice while speaking to Facebook founder Mark Zuckerberg in California is still ringing in our ears. He talked about the difficult childhood days and how his mother cleaned dishes and faced hardships to raise her children. Modi said, “So you can imagine what a mother had to do, what a mother had to do to raise her children, what she must have gone through.” He further added, “It is not what you become that a mother is going to want or wish for, it’s how you become that.” Hats off to Heeraben Modi.