Priyanka Chopra is in New York and her pre-wedding festivities have begun. The actress announced her relationship with American singer Nick Jonas months back and now the rumours are rife that the two are getting married in December this year. Priyanka was given her first bridal shower party last night in the NYC and it seemed so much fun. What stole the show was a dazzling Priyanka looking like a stunner in that white outfit. Much like most brides in the West, it seems PC also prefers to don white above other colours on all special occasions. This time, it was a white gown with feather detailing as Priyanka headed to a popular store in the city to enjoy her bridal shower.

PC does create wonders with her style wherever she goes. Last night though, along with her usual diva-sque charm, she also carried the soon-to-be-bride glow and looked absolutely lovely. Priyanka wore a Marchesa gown from the designer’s Spring 2018 collection. 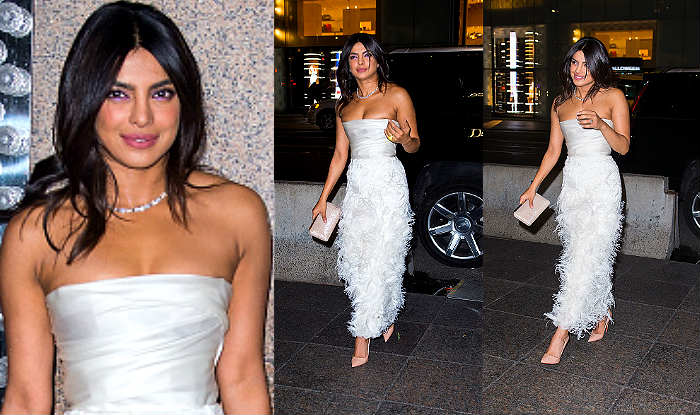 She added a diamond string from Tiffany & Co. and a pair of nude Louboutin heels to her look. Her usual middle-parted hair and pink lips further complimented the look. Priyanka looked every inch like her radiant self. Check out more pictures of her: 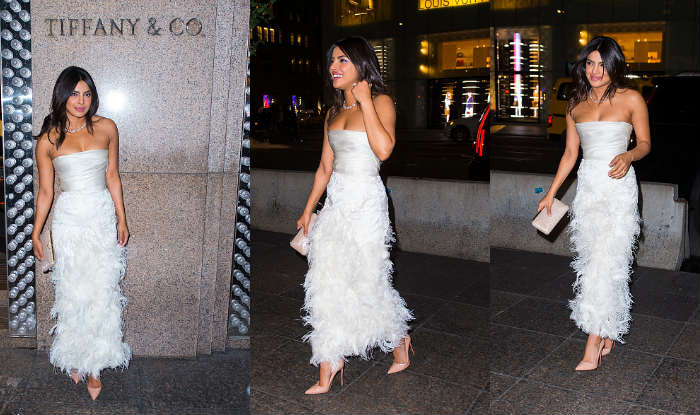 Both Priyanka and Nick are head over heels in love with each other. The two have been spending time together in the US. In fact, reports also suggested that Nick bought a villa worth Rs 48 crore (approx) in Los Angeles’ Beverly Hills area for Priyanka. The actress was also seen spending some time with Nick’s mother, Denise Jonas, as she observed her first Karva Chauth fast for soon-to-be hubby Nick.

Meanwhile, the reports of Priyanka’s wedding clashing with Ranveer Singh – Deepika Padukone’s wedding reception in India, also surfaced. However, a close source to the couple revealed that Priyanka and Nick aren’t getting married on December 1, which is when Ranveer-Deepika have scheduled one of their reception parties.