Priyanka Chopra got married to Nick Jonas in two exquisitely designed wedding ceremonies at Jodhpur’s Umaid Bhawan Palace on December 1 and 2. The couple then headed to Delhi for their first wedding reception. While everything about PC-Nick’s wedding seemed glorious, grand and a part of a fairy-tale, the customs and rituals at the wedding were also well taken care of. The new bride Priyanka can now be seen in a look which speaks volume of her faith in traditions. She has got henna on her palms, sindoor (vermilion) in her middle-parted hair, a chooda (traditional bangles for newly married women) in her hands and also a mangalsutra (a traditional thread/ chain with black pearls) in her neck.Also Read - Priyanka Chopra and Nick Jonas Welcomed a Baby Girl, Cousin Meera Chopra Confirms

Priyanka’s mangalsutra is a sleek one with four uncut diamonds forming a pendant. A close look of the mangalsutra is out now. Priyanka’s friend, Sudeep Dutt took to Instagram to share a photo in which our desi girl was giving a close glimpse of the mangalsutra in her neck. One can also have a nice look at her mehendi in the same picture. While posting the picture on social media, Dutt simply wrote, “Mrs Jonas…”. Also Read - Priyanka Chopra and Nick Jonas' First Child Is a Baby Girl : Reports

In the picture, Priyanka is seen wearing a green saree by Sabyasachi. This was PC’s first public appearance after the wedding as she left Jodhpur for Delhi. In the capital, during her lavish wedding reception, the actress wore a sparkly number by the designer duo Falguni & Shane Peacock. The couple will be having another wedding reception soon in Mumbai for their friends from the Hindi film industry. 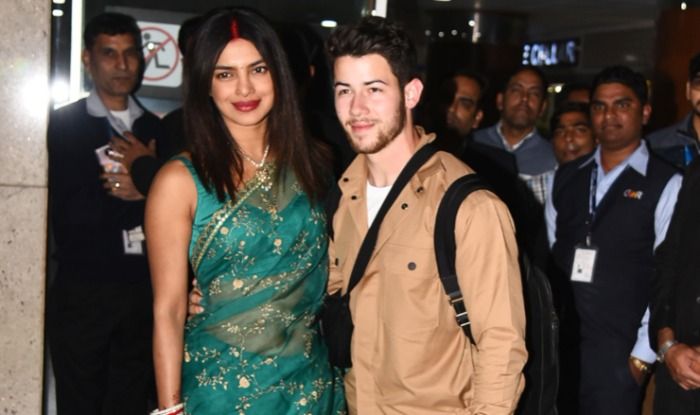 Meanwhile, Priyanka and Nick are expected to ring in New Year celebrations during their honeymoon. While talking about the same, the actress revealed that her husband has planned a surprise for her and therefore, she won’t be able to give away any detail about their honeymoon. Our hearty congratulations to the couple, once again!