The iClik, or Instant Complaint Logging Internet Kiosk, was set up in the ATM kiosk of a Bank of Baroda in Bhubaneswar, Odisha earlier this year as part of a pilot program. It works by allowing a victim to report a sexual assault in one of three ways: bringing a pre-written complaint for the iClik to scan; typing out the complaint into the machine; or speaking directly into the machine — an option empowering even the illiterate woman to report a crime. 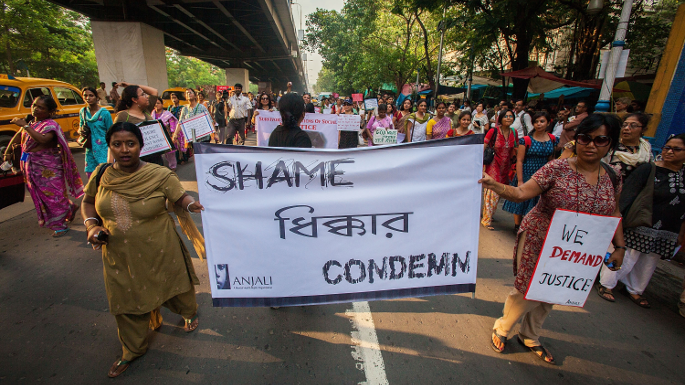 It has been nearly two years since the violent rape and subsequent death of a 23-year-old Indian woman, coined as Nirbhaya, in the infamous Delhi gang rape case, for which the four convicted attackers were sentenced to death. And yet — India’s so-called ‘rape culture’ is still making international headlines. The stories of tourists, village girls and everyday housewives continue to remind the world that sexual assault is happening everywhere in India, but many feel like no one is trying to fix the problem. Also Read - IND vs NZ, 2nd Test: Job is Only Half Done, Says Spinner Ajaz Patel After His Four-for

Critics are quick to point fingers at the slacking justice system, but a more prominent issue looms. Despite the media’s rampant coverage of the most violent rape crimes and the disinterest of policeman and lawmakers to act, many incidents go largely unreported in India, meaning people may be ignoring the bigger picture. A new ATM-like machine allowing women to report sexual crimes quickly and anonymously could very well be the first, effective solution to helping India solve its larger problem. Also Read - US, EU Express Concern at China's 'Problematic Actions' in Asia Pacific

The iClik, or Instant Complaint Logging Internet Kiosk, was set up in the ATM kiosk of a Bank of Baroda in Bhubaneswar, Odisha earlier this year as part of a pilot program. It works by allowing a victim to report a sexual assault in one of three ways: bringing a pre-written complaint for the iClik to scan; typing out the complaint into the machine; or speaking directly into the machine — an option empowering even the illiterate woman to report a crime.

Once the complaint is admitted, it is sent to the most relevant police station, and the person receives a receipt slip of sorts to keep track of the status of the complaint. Since its installment in January, reports say about eight to 10 use the machine everyday. IClik’s creator, senior member of the Indian police force Joydeep Nayak, said he wanted to create a solution that would help women feel safe to report crimes and also assist police in understanding how large-scale the problem really is.

“Indian women think twice before going to a police station without a chaperone, and this is wrong,” Nayak told the Sydney Morning Herald. “It means they cannot exercise their basic human right. If women are afraid of registering complaints, that means we do not know the real level of crime. That is disgraceful. It means criminals are getting away with it.”

Although it’s estimated that two rapes occur every hour in India, and 240,000 sexual offenses were reported against women in 2012, these numbers don’t seem to appropriately represent the true scale of the issue because many women still don’t report the crimes. Women’s activists also agree that addressing a largely ignored root issue behind rape could help light the much needed fire under the justice system to pay attention and do something.

“The fact that women are put off from going to a police station to file a complaint masks the real scale of the problem of violence,” said Mamta Sharma, chair of the National Commission for Women in New Delhi. “We don’t have real figures. If we had kiosks all over, we would then know the true picture.”

How much success the iClik has had to help prosecute the offenders about which complaints are being filed is yet to be seen, but one woman said for her it was the difference in staying in a dangerous situation and having the help to get out.

“In 10 minutes, I was out. It was so easy, I wish more women knew about it,” said Manju Mitra, 38, who filed a complaint against her husband. She said he was beating her and demanding more dowry money. Mitra said her husband and his friends even threatened to kill her if she went to the police.

After a friend told her about the iClik, Mitra said the police were quick to act as soon as she filed the complaint. “I’ve heard my husband is on the run because the police are trying to arrest him, and this is just two days after I lodged the complaint,” Mitra said.

Lack of Reporting is a Global Issue

While India has recently been the global face of everything wrong with preventing and dealing with sexual assault, the country is certainly not the leader in rape crimes nor the only one where they are underreported. According to the Rape, Abuse and Incest National Network, an average of 60 percent of assaults in the last five years were unreported in the United States. Out of the 40 percent of rapes that were reported to the police, only about 10 lead to an arrest. From there the numbers increasingly get smaller to the point where it’s proven that 97 percent of rapists will never serve time.

The problem that plagues India is the same that troubles the United States and so many other countries: a combination of victim intimidation, offenders who have political and social influence (Ray Rice, anyone?), and a justice system that prosecutes sexual assault ineffectively. Unlike with other crimes, police ask accusers in rape cases to take the lead in the investigations, a method that practically pushes an emotionally unstable victim to back down before the rape is even filed.

For example, if she does not explicitly tell police she wants them to investigate, the case is dropped, and the victim is abandoned without any help or hope in bringing her attacker to justice.

“There are a lot of jurisdictions that are trying to do it better,” said Michigan State University psychology professor Rebecca Campbell in response to the way police often handle college rape cases. “But it’s still incredibly common that the police just do not do the investigation. They do not treat other crimes this way. If you have a property crime, they don’t say: ‘Would you like me to dust for fingerprints? Would you like me to canvass the area for witnesses?’”

Campbell added that police should “do what you do with any other crime — you investigate, and you go and try to catch the bad guy.”

The iClik machine is available for use 24-hours a day for reporting crimes and all complaints remain anonymous.