Rhea Chakraborty’s Sweatshirt Reads ‘Love is Power’, Another Statement After ‘Smash The Patriarchy’!

Rhea Chakraborty knows her way with the words and fashion's impact in creating a statement. After her very popular 'smash the patriarchy' t-shirt, she now wears a sweatshirt that reads 'love is power'.

Actor Rhea Chakraborty was once again clicked and followed by the media as she stepped out of her house after a long time since she was granted bail in November. This was yet another moment when the actor, who was brutally witch-hunted by the media for many months in the Sushant Singh Rajput death case, used fashion to convey her message to all. The actor wore a casual pink sweatshirt that read ‘Love is power’.Also Read - Rhea Chakraborty Gets Annoyed, Asks Paparazzi to 'Not Follow' Her as She Gets Clicked With Brother Showik Chakraborty

Rhea, who has not spoken much during the entire probe time, has a way of using fashion to make a statement. On the day of her arrest, as the media hounded her and covered her widely, she wore a black T-shirt that read ‘Roses are red, Violets are blue, let’s smash the patriarchy, me and you’ which was a way of commenting on the entire harassment she and her family members had to endure because of her relationship with Sushant who was found dead at his apartment on June 14, 2020. The statement that she made by wearing that T-shirt was heard widely. Soon, her industry colleagues, especially women, took to social media to show solidarity with her by using the hashtag #SmashThePatriarchy in their tweets and other posts on social media. Also Read - Rhea Chakraborty is Quiet, Doesn't Speak Much: Rumi Jaffrey Reveals How She's Dealing With Harassment in Sushant Singh Rajput Death Case 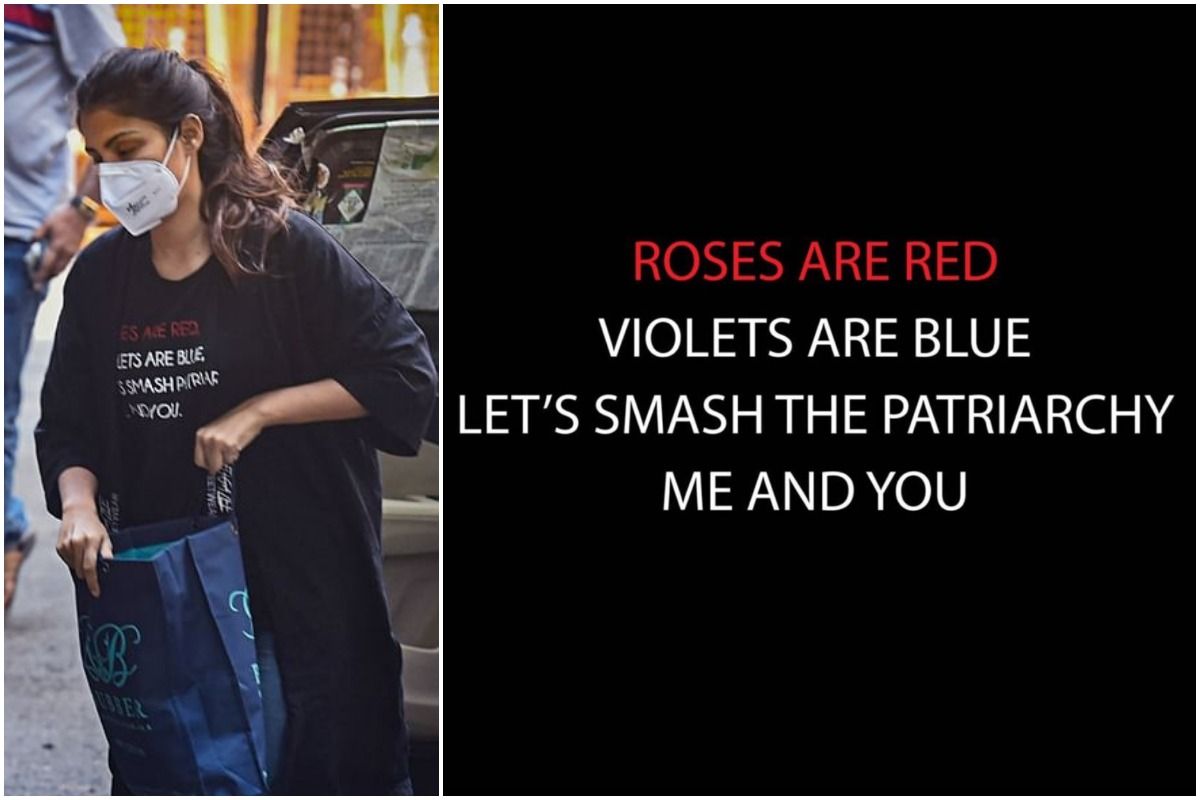 Rhea Chakraborty/ a close look at the message on her t-shirt (Photo Courtesy: Viral Bhayani)

This time as well, when she left her house, it seemed like Rhea tried to make sure that the world is still listening to her – loud and clear. The actor is reportedly making a comeback on-screen this year and trying to deal with everything that 2020 offered to her. Her friend and director Rumi Jaffrey recently mentioned that Rhea has gone ‘quiet’ and ‘withdrawn’. He said that she doesn’t speak much but maintained that she’s going to talk against everything that she was subjected to last year. Also Read - Kangana Ranaut Wears a 'Phulkari Dupatta', Uses Fashion to Make a Statement About Her Link With Punjab Amid Farmers' Protest