Priyanka Chopra chose to wear an all red Sabyasachi lehenga for her Hindu wedding with Nick Jonas on December 2 at Jodhpur’s Umaid Bhawan Palace. The actress looked gorgeous in that colour, finishing her look with diamond jewellery and a long veil, also by Sabyasachi. Now, the designer himself has taken to Instagram to share what all went behind creating that stunning outfit.Also Read - Priyanka Chopra And Zendaya Make a Statement With Green Valentino Suit With Chic Purple Shirt: Who Wore It Better?

The particular ensemble has been named as the ‘Kannauj Rose Lehenga’. The voluminous lehenga has got embroidered rose flowers and heavy sequin done in the same colour. The designer has revealed that PC’s lehenga was the result of a constant collaboration between him and the actress herself. The video further shows Nick’s full name, Nicholas Jerry Jonas, being designed with hand embroidery on the giant veil. One can also see a glimpse of the actress’ mangalsutra being crafted. Watch the clip here: Also Read - Dia Mirza, Priyanka Chopra And Lara Dutta's Throwback Pic From Miss India 2000 Pageant Leaves Fans Nostalgic

A post shared by Sabyasachi Mukherjee (@sabyasachiofficial) on Dec 6, 2018 at 4:48am PST

Earlier, revealing more about the lehenga in his previous post, Sabyasachi gave a detailed view of how the outfit really came out. He wrote, “As a brand that designs wedding outfits for a diverse client base from across the globe, we are constantly looking for new ways of creating Sabyasachi Classis. While some brides stay rooted in purist tradition, other aspire to re-interpret it to suit their personalities. The colour red is probably the most evocative of North Indian wedding attire and is traditionally worked upon with gold and silver.” 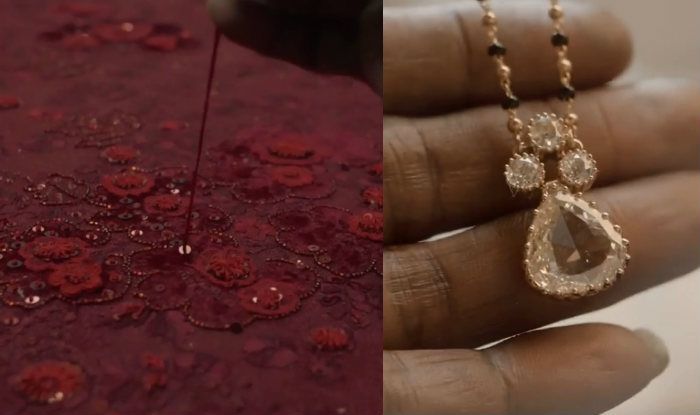 The post further read, “The idea of creating a tonal red bridal lehenga came to us while we were working on our 2012 Couture Collection – ‘New Moon.’ In 2015, we updated the look for our first collaborative Couture Show- ‘Bater’- with Christian Louboutin. Priyanka Chopra’s neo-traditional bridal lehenga was the result of an active collaboration between the designer and the bride. The Kanauj-Rose lehenga remains a Sabyasachi house classic for women who like to marry global traditions with Indian heritage”.