Shamita Shetty was recently clicked in the city wearing a pair of distressed denim and a basic T-shirt. See pics

Shilpa Shetty’s sister, Shamita Shetty, was recently spotted in the city. The actress is usually seen stuck to basics when it comes to flaunting her style. She is often seen sporting a casual dress, a pair of denim-shirt or any other piece of an easy-breezy outfit. To her credit, Shamita rocks everything with equal panache and looks stunning. However, we can’t say the same about her latest sighting. Also Read - Watch: Shamita Shetty on Abusive Husbands, Black Widows, Sister Shilpa Shetty, And More

Shamita was clicked by the paparazzi in the city the other day. She wore a basic blue T-shirt with a pair of denim. Open highlighted hair, a beige bag, and same coloured ballerinas, Shamita’s look had everything that reads perfectly on paper. But, wait till you see those jeans. Shamita wore a pair of blue denim and the one which seemed overtly distressed. In fact, it’s actually that pair that your mamma or dadi must have warned you about! Check for yourself! Also Read - ‘Queen of My Life And Heart’: Raj Kundra’s Romantic Birthday Wish For His Darling Wife Shilpa Shetty Kundra 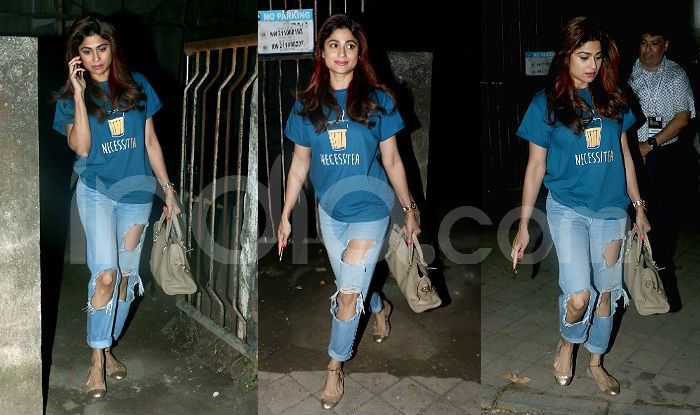 We are all one for sporting distressed denim. It looks cool and gives a certain definition to one’s look. But, one has to carefully choose a pair. It should surely not look like the one they call a beggar’s outfit (apologies for using a bad connotation but that’s how it is known)!

Remember once Deepika wearing a pair like this to an event? Even she was heavily trolled for trying to impress with a look which really doesn’t require to be taken so seriously.

As is, Shamita is the ever-so-graceful Sharara girl of Bollywood. Let’s hope her stylist has a little pleasant sense of fashion for her!