Bollywood’s fashionista Sonam Kapoor never fails to impress the fashion police with her dressing sense. She is one actor in Bollywood who is not afraid of experimenting with her outfits and can carry any outfit with a certain poise. Recently, Sonam was spotted in a pink pan-suite and looked stunning as always. Also Read - Sonam Kapoor On Sexism In Bollywood, 'Each One Of Us Needs To Make Better Choices, Or We Will Be Subjected To A Witch-Hunt'

Sonam took to her Instagram to share a picture where the Neerja actor can be seen posing in a pink Calvin Klein pantsuit and a white Prada shirt.  Looking bold and gorgeous at the same time, Sonam gave a strong pose. Sonam is currently busy promoting her film Ek Ladki Ko Dekha Toh Aisa Laga which will be releasing on February 1. Also Read - Sonam Kapoor Steps into the Shoes of ‘Marilyn Monroe’ and Looks Oh-So-Pretty, See PICS

A few days back, Sonam was spotted along with her sister Rhea Kapoor at the airport where she donned blue and white floral jumpsuit, white coat and black belt. With curled up hair, Sonam looked gorgeous as always. 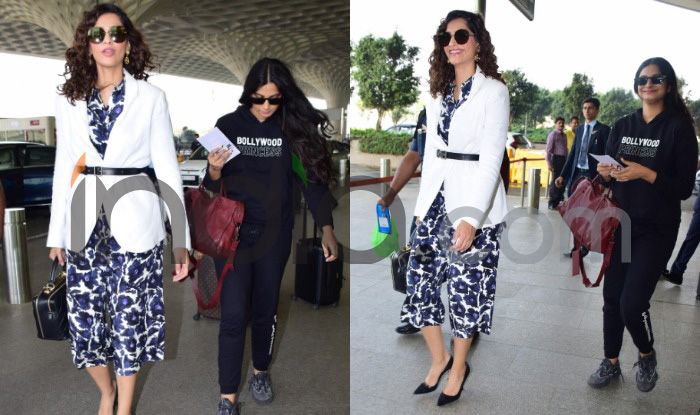 On the work front, Sonam will soon be seen in The Zoya Factor and Ek Ladki Ko Dekha Toh Aisa Laga. The former is about a Rajput girl named Zoya Singh Solanki who meets the Indian Cricket Team through her job and becomes a lucky charm for the team for the 2011 Cricket World Cup. The latter is a coming-of-age romantic comedy-drama directed by Shelly Chopra Dhar and starring Anil Kapoor, Juhi Chawla and Rajkummar Rao in lead roles.