Subdued colours, shades of white and a lot of sparkles ruled the night with actresses putting their best foot forward in looking absolutely amazing at the red carpet. Check out who wore what at Star Screen Awards 2018 here: Also Read - Nora Fatehi is The Victim: Actor's Team in Official Statement After ED Questions Her For 8 Hours 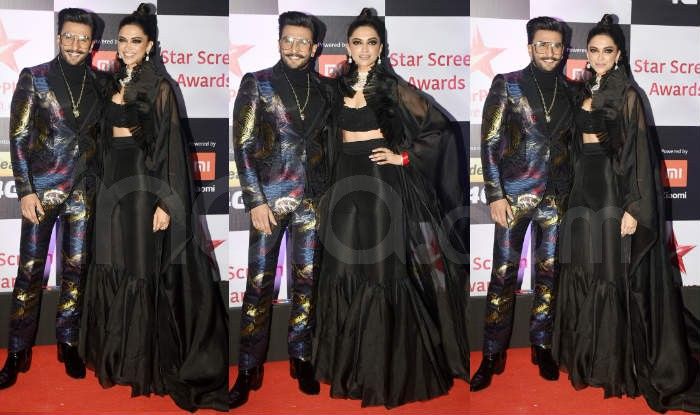 Deepika gave one of the rare black sightings at the red carpet last night. Her Anamika Khanna outfit definitely made an impact and Deepika looked beautiful. However, that top knot took away a notch from her overall look. Diamond jewellery and her chooda finished the look further. 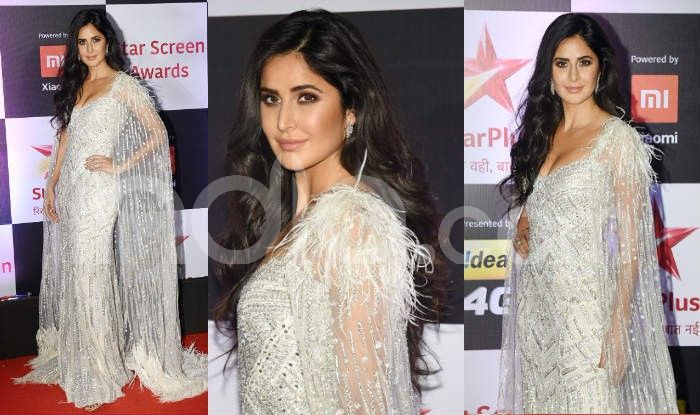 Going by the trend, Katrina chose a white embellished gown with a sheer cape from designer duo Falguni & Shane Peacock at the red carpet. The actress kept her hair usual wavy and completed the look with soft makeup. She owned every bit of that gown. 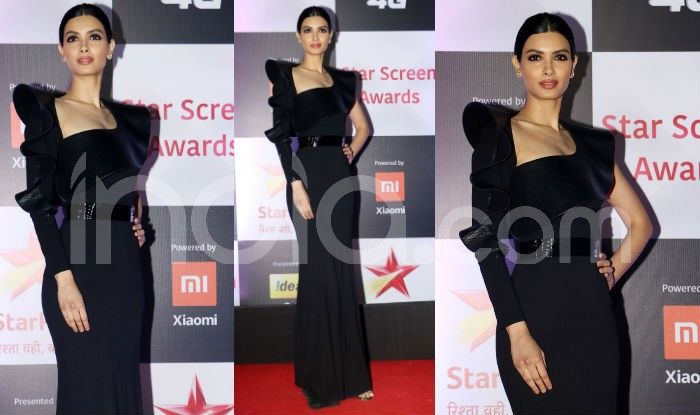 The tall actress decided to go sharp at the event wearing an outfit by Amit Aggarwal. She also picked up on the trend flaunting those ruffles. While this wasn’t her one of the best outings, there’s no denying Diana looked good in that black number. 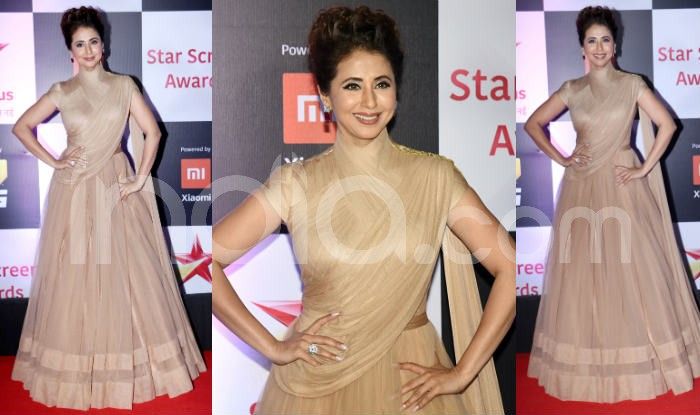 The actress is not seen making a red carpet appearance much often. However, this time, the Rangeela star wore a Shantanu & Nikhil beige gown, the one with a lot of volume. While we love how she always accentuates her look with that wide grin on her face, Urmila’s look felt a little too dated. An addition of a statement choker or big earrings could have upped this look notched higher. 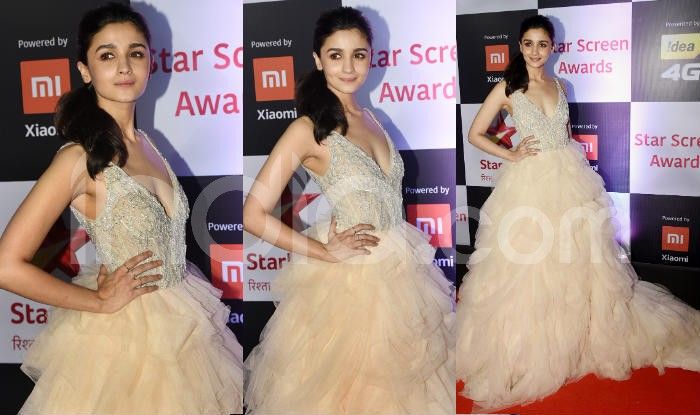 Alia, whose Raazi bagged many awards at the event, went for a bridal-sque gown. Her embellished tulle number was from international label Winnie Couture. While Alia wore the look well, it’s hard to warm up to that dress. It completely washed off the actor. It could only be us but we love her a wee bit more in colours. 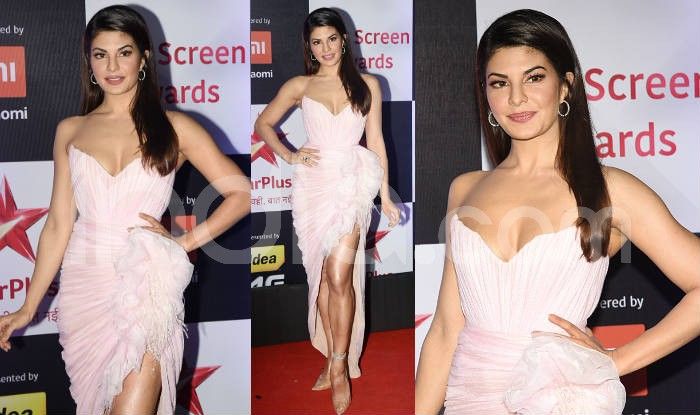 Jacqueline went for a pretty-in-pink route at the awards ceremony. She rocked an Ester Abner outfit with a thigh-high slit and plunging neck detail. Now, while Jacky is somebody who can make even a piece of rag do wonders on her, this outing was a miss for us. Maybe because a gown with both the thigh-high slit and the off-shoulder detail just becomes too much to carry. For Mouni, it was a white voluminous gown from Lebanese designer Robert Abi Nader. With no heavy jewellery and dewy makeup, the actress’ styling was on point. However, the choice of the gown itself was a downer. The plunging neckline added to the disappointment. Mouni has done better in the past. 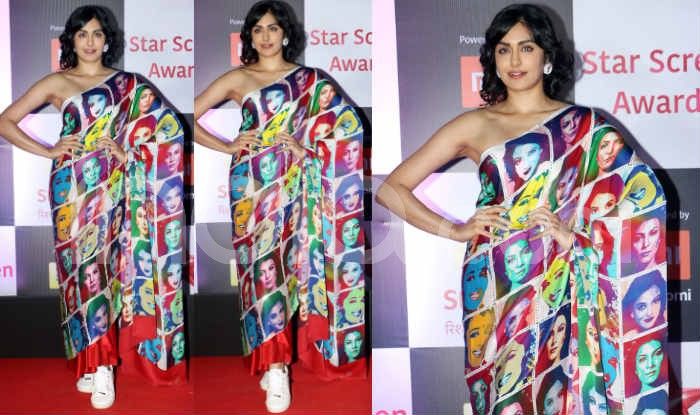 The actress went for a statement saree look at the event. Adah wore a fusion saree, designed by Satya Paul. It had the face of Madhuri Dixit, Sushmita Sen, and Aishwarya Rai Bachchan printed on it and that’s what made it stand out. Adah further added a pair of white tights and white blouse to wear with the saree, something that let the saree take the entire limelight. Her’s was definitely one of the best looks of the night. 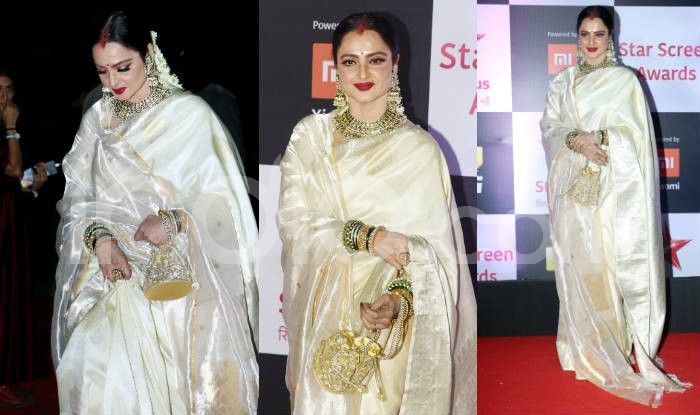 Spreading some old world charm at the red carpet was Rekha. Donning her statement Banarasi saree, heavy kundan-jewellery and that shade of lipstick, the veteran actress looked absolutely radiant. She also carried a similar looking dupatta (or is that a shawl?) on her shoulder, adding more beauty to the look. Rekha looked timeless.

Who was your favourite?