In an effort to combat hate and spread peace across the nation, this weekend, the Sikh Coalition—a community-based organization that works toward the realization of civil and human rights—will observe an annual Day of Seva (service), in which participants all across the country will honor the victims of the Wisconsin Sikh temple shooting in 2012.

In an effort to combat hate and spread peace across the nation, this weekend, the Sikh Coalition—a community-based organization that works toward the realization of civil and human rights—will observe an annual Day of Seva (service), in which participants all across the country will honor the victims of the Wisconsin Sikh temple shooting in 2012. Also Read - Man arrested for killing Sikh in US

This year marks the third anniversary of the Oak Creek Gurdwara Massacre, in which six innocent lives were taken and several others were left injured. It was the most violent attack on an American house of worship since the 1963 bombing of the 16th Street Baptist Church in Alabama, that is until the recent tragedy in Charleston, S.C. this past June. Also Read - Thousands participate in annual 'Sikh Day Parade' in US

Just after the Wisconsin tragedy three years ago, the Sikh Coalition took the initiative to honor the lives of hate crime victims by engaging local Sikh communities across the nation in an annual Day of Seva. The series of community service events, which continue to grow in popularity, have become an annual tradition. This year, at least 15 cities across the country will participate in the Sikh Coalition’s annual Day of Seva, with the possibility for more. 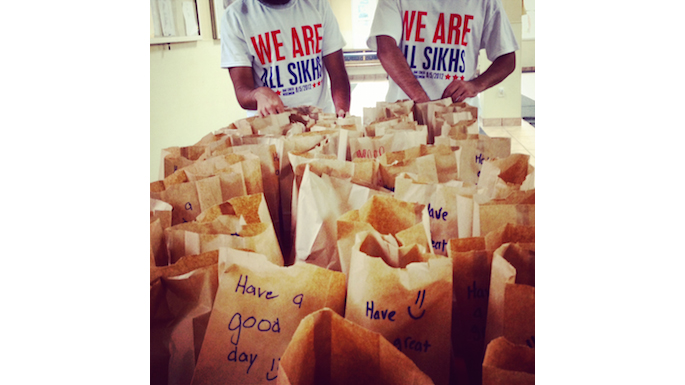 “Sikhs believe in the principle of chardi kala, which means eternal optimism, so we were discussing what to do for the anniversary of the Oak Creek tragedy to commemorate and remember those who lost their lives and remember the survivors,” Harjit Kaur, the California community development manager at the Sikh Coalition, said. “This is something that we felt we could do to remember that day in a positive way.”

According to Kaur, in addition to spreading goodness and paying tribute to the Oak Creek community, the Sikh Coalition’s annual Day of Seva also serves as a platform to raise a shared understanding about the Sikh faith and community.

“We are out doing the seva in our Sikh identity, so we are bringing awareness to Sikh issues, and it becomes a point of conversation with those who walk by,” she said. “Especially with these park clean-ups, people often come up to us and ask why we are there. We are creating a conversation with the community that automatically brings awareness.”

This weekend, Sikhs across New York will pair with the Manhattan Sikh Association in a joint effort to clean-up Morningside Park in New York City. The clean-up effort has greatly benefited the historic park and has drawn large crowds. Last year, dozens of passersby joined hundreds of Sikhs to lend a helping hand—and this year, the Sikh Coalition anticipates an even larger crowd.

According to Kaur, this year’s annual Day of Seva is especially unique, as the Sikh Coalition will also recognize and honor the victims of the AME Church in South Carolina. This past June, the Sikh community joined the rest of the nation in mourning and outrage when nine members of the South Carolina church suffered the same hateful tragedy that rocked the Sikh community in 2012. The overwhelming outpour of support from the Sikh community even garnered national attention from the media.

“The Sikh community, the Sikh Coalition—we feel the pain and we feel the suffering that comes from an attack like this, especially in a house of worship,” Kaur said. “Hate is hate, so what we try to enforce and what we want people to see is that this type of an attack is an attack against all of us.”

The Sikh Coalition in New York City will observe its Annual Day of Seva this Saturday, August 1. Those who wish to participate are invited to meet at the Morningside Park entrance, located at West 120th Street and Morningside Avenue, at 10 a.m. sharp. The seva project is expected to finish around 1:30 p.m. Volunteers are advised to wear sneakers and dress comfortably. To RSVP, you may  email the New York City Sikh Coalition at nycseva@sikhcoalition.org.