It all began with a turquoise crop top and gray skirt that Halket donned on May 25 to Etobicoke School of the Arts in Toronto, Canada. A male teacher commented on Halket’s shirt saying that it looked “too much like a sports bra.” 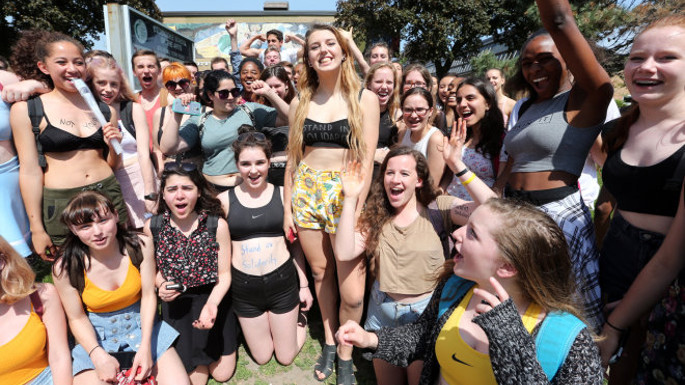 It all began with a turquoise crop top and gray skirt that Alexi Halket donned on May 25 to Etobicoke School of the Arts in Toronto, Canada. A male teacher commented on Halket’s shirt saying that it looked “too much like a sports bra.” Also Read - Sacrifice For Education: Himachal Man Sells Cow to Buy Smartphone For Online Studies of His Children

When she refused to change or cover it up she was sent to principal Rob MacKinnon’s office. He too deemed her outfit inappropriate for school and told her she was not allowed to wear this type of attire to school again. Halket was even told not to wear the remaining “lineup of cute body positive outfits” she had planned to wear during her birthday week that made her feel beautiful. Also Read - Bengaluru Hospital Bans Woman COVID-19 Patients From Wearing Dupatta or Long Scarf, Here's Why

While MacKinnon maintains that the policy is to maintain professionalism and appropriate dress in school, Halket saw the dress code as discriminatory. She took to social media to defend her belief that skin shouldn’t be “seen as sexual or provocative.”

Halket refused to comply with the dress code, and organized a Facebook event protesting the sexist dress code and declaring her birthday #CropTopDay. She invited more than 7,000 girls to participate and wear their crop tops and sports bras to school.

Hundreds of students responded to Halket’s call for protest. In addition to wearing crop tops and sports bras to school, some students wrote messages of solidarity on their bodies. The students at Etobicoke shared the movement using the hashtag #CropTopDay.

Her event also sparked a discussion amongst the women on her Facebook event page, many of them pointing out the double standard in dress code amongst females and males at their school.

“If girls get called down to the office for showing ‘too much skin’ or ‘not dressed appropriately’ then guys should be called down to when they low-ride or wear muscle tanks,” a student commented.

“In my experience, women are subject to more discrimination and scrutiny when it comes to the dress code,” wrote another student.

Alexa Bowie, student council president told BuzzFeed Canada, “I am so disappointed in my school for the way they handled the situation and I am so proud of the students and Alexi for coming together and making a change!”

The school administration responded to #CropTopDay by discussing the dress code policy with students in the library later that day. But the administration and the students could not come to an agreement as to what is inappropriate attire for school.

The school’s dress code is also vague allowing faculty to decide what falls into the realm of inappropriate. Bowie shared a snapshot of the dress code: “So that we can all feel comfortable in our school/work environment, clothing must be respectful–it shouldn’t be too revealing or display inappropriate language. Students may be asked to change or cover up if their clothing is deemed inappropriate by the school administration.”

The students and faculty could not come to agreement in the end, as Halket could not accept that baring skin was “unprofessional.”

“[MacKinnon] said ‘this is a professional environment,” Halket told The Canadian Press. “So I said, ‘yes, but the word professional comes from profession, meaning job, and this is your job, so I understand if you have to be professional, but I have to go to school and I’m going to wear whatever makes me comfortable.'”