Two Indian-American Kids Tie in the Scripps National Spelling Bee, And we Couldn’t be More Proud

While Indian-American kids won this year’s title for the Scripps National Spelling Bee, a section took to social media to protest their outrage on "non-Americans" winning the coveted title, yet again. 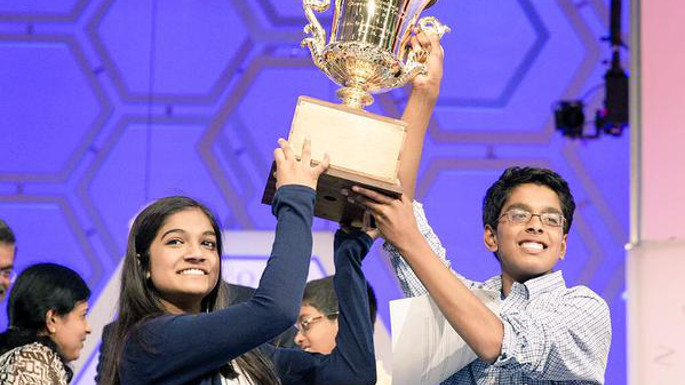 I root for a white kid to win the #spellingbee . I root against every Chinese , Japanese , Korean, and Indian. I’m not ashamed to say this..

Among the past 17 winners of the Scripps National Spelling Bee, 13 are from Asian-Indian descent. And despite the hate, Indian-Americans Gokul Venkatachalam, 14, of Chesterfield, Missouri and Vanya Shivashankar, 13, of Olathe, Kansas have emerged as winners at this year’s spelling bee. The winning word for Shivashankar was “scherenschnitte,” and by nailing “nunatak,” Venkatachalam guaranteed his victory.

They battled against 285 spellers, at the Gaylord National Resort and Convention Center at National Harbor, Maryland, to win the trophy. It was Shivashankar’s fifth year and Venkatachalam’s fourth year at the Spelling Bee. These eighth graders will receive $35,000, a $2,500 U.S. savings bond, a complete reference library and other prizes, along with an engraved trophy.

Shivashankar dedicated her win to her grandmother, who died in 2013.

“All she really wanted was her grandkids to do so well, and I hope I make her happy with this,” she said.

Though there were 285 spellers in the initial round, it was narrowed down to 49 for the semifinals, then again to 21, and finally, only 10 made it to the finals. The contestants ranged from the ages of nine to 15.

We are proud of Venkatachalam and Shivashankar! Enjoy your win, because you’ve earned it.

Among the past 17 winners of the Scripps National Spelling Bee, 13 are from Asian-Indian descent.