Varanasi’s Ganga Aarti Taught me a Parenting Lesson: Ultimately, it’s About What Floats Your Boat

I first had doubts about my own parenting when one day, after school, my then 6-yr-old boy walked into the house and complained about how a classmate had called him a 'Hindu'.

I was in Varanasi for a few days. There, a cousin insisted to go for Ganga Aarti. That was something I wanted to avoid. Please don’t judge me already, I have nothing against religion but I have never been a huge fan of rituals. My extremely areligious mother ensured I never had a face-off with the religious ones in the family. However, I first had doubts about my own parenting when one day, after school, my then 6-yr-old boy walked into the house and complained about how a classmate had called him a ‘Hindu’. When I explained he needn’t take any offence as he was a Hindu after all, he said, “I always thought we were Indians. That’s what you always said. When did we become Hindus?”

That question has raised its ugly head time and again, in mine. Because it makes me wonder if I haven’t been a good parent by not introducing my children to our customs and rituals. While I believe that I should let them figure things out for themselves, I also wonder if I am failing to do enough. If I introduce them to good music, books and art, shouldn’t this be my job too? But this is where I feel I am treading on thin ice. Maybe I have deliberately kept them away because it would kill me to see either of my kids getting totally sucked into what I consider the rigmarole of rituals. Also, call me what you may, but I have never bothered to visit places of worship because I never felt ‘religious’ enough to be there in the first place. 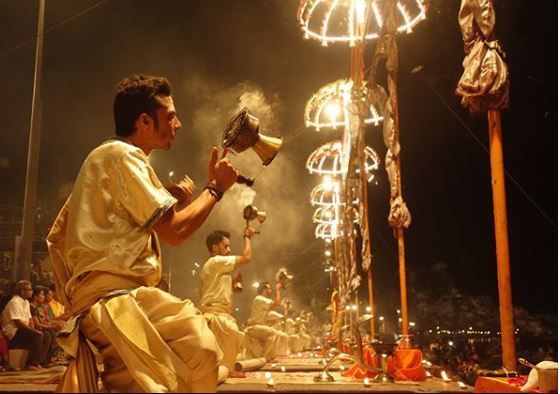 With my kids also then I have kept it to bare minimum. God is one, people worship him in different ways, give him different names. That’s all. So anyway, back to the idea of going for the Aarti. I wouldn’t commit myself, my son sat on the fence, as always, and my daughter, always keen on experiencing new things, was game. Eventually, I gave in. We took the hotel cab and after a 45-minute ride that covered 5-odd kms, we got there.

A boat ride followed and I kept wondering when the Aarti will begin. I looked at my cousin, the same one who had got us there, and she was as clueless as I was. Half the folks in our group were clinging on to the pattals with pooja samagri (leaf plates carrying the stuff we needed to do Aarti on our own). I drifted in my head as the boatman told us stories about the ghats, how Shiva Himself had come there once, and so on. 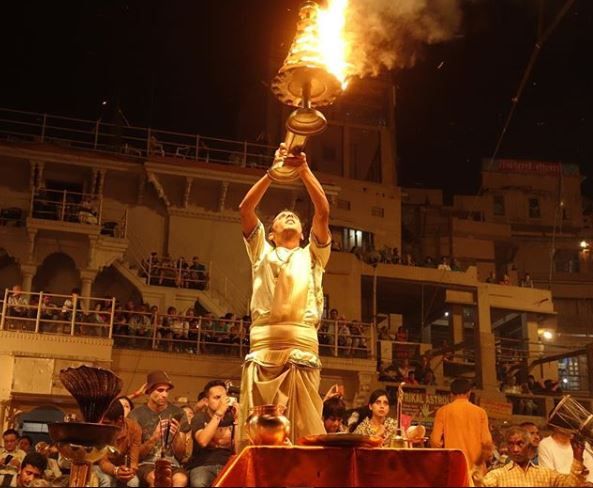 Just when I was beginning to enjoy the ride, I realised we were returning. It had grown dark and the ghat was now ready to hold the Aarti. A little to the right, another group of priests was also prepping for the Aarti. The boatman told us two Aartis are held simultaneously. While my religious cousin clapped her hands in glee, I was a little skeptical. Two much to handle for you, I asked myself, grinning at the wordplay.

The group of priests right ahead started first. All dressed in saffron, they first sang bhajans and then began the ritual. With huge, multi-tiered lamps, they began the puja amid chanting of mantras. All boats had, by then, converged on the ghat and were sticking close to each other. On our left was a bigger boat with a big Punjabi family. They screamed, laughed, even showed the Aarti to someone via video-call. “You can’t be serious,” I thought. On the other side, the boat carried people from down south who sat with folded hands. And there I was, wondering what stance to take. Should I behave like a tourist, which I was, and click photos and complain to the boatman that I wasn’t getting a good view? Or should I behave like a devout, press my palms together and sing whatever bhajan came to my mind?

Ultimately, the boatman came to our rescue. He told us we could pray as the Aarti had begun. My cousin instructed the kids to pray to God, ask Him for whatever they really wanted. I followed suit, telling myself I had a long list of must-haves. And then it hit me, my God would know what I need, wouldn’t He? If I don’t have it already, there must be a reason. So as mantras resonated in the air, I talked to my God, asking him to just give me courage to deal with my problems.

I do not know what people gained out of that cacophony emanating from two Aartis going on just a few minutes apart. But my cousin was teary-eyed because she felt a connection. My kids were happy with the show (!) And I left it at that. This is what religion is all about, isn’t it? Everyone doesn’t need to be like us and at the same time, we should be able to accept those who are different. Also, we tend to overthink; at times, it helps to go with the flow. Ganga Aarti brings together people of all hues, the hardcore Hindus, the tourists, even the ones like me who go because they happen to be in Varanasi. I came back smiling as I was sure I was doing just fine as a parent. My kids will also learn someday, at another Ganga Aarti, maybe?

Disclaimer: The views and opinions expressed in this article are those of the author and do not necessarily reflect the official policy or position of India.com. The writer is solely responsible for any claims arising out of the contents of this article.