Sonam Kapoor gave us another sari look that is summery, chic and traditional all in one.

Sonam Kapoor has been busy promoting her film Veere Di Wedding as it is up for release tomorrow. For her latest round of promotions, Sonam gave us another sari look that is summery, chic and traditional all in one. The actor who’s known for pushing boundaries when it comes to her sense of dressing and style chose a cool blue traditional sari with a gorgeous floral print along with gold borders, She teamed this sari with a purple anti-fit blouse. Also Read - Swara Bhaskar Becomes Latest Target of Memes After She Calls Israel 'Apartheid State'

She completed her look with an intricate silver neckpiece, earrings and an Amrapali bag. She also styled her hair with fresh flowers and wore traditional Kohlapuri chappals. As she exited the studio she smiled and gushed towards the cameras. Also Read - Kareena Kapoor Khan Expresses Disappointment Over People Who Don't Understand 'Gravity of The Situation'

This look is perfect for summers as it has light and airy fabrics and colours. Also Read - Priyanka Chopra, Sonam Kapoor Help Netizens With Updated List of Resources Amid COVID-19 Second Wave

Check out her outfit: 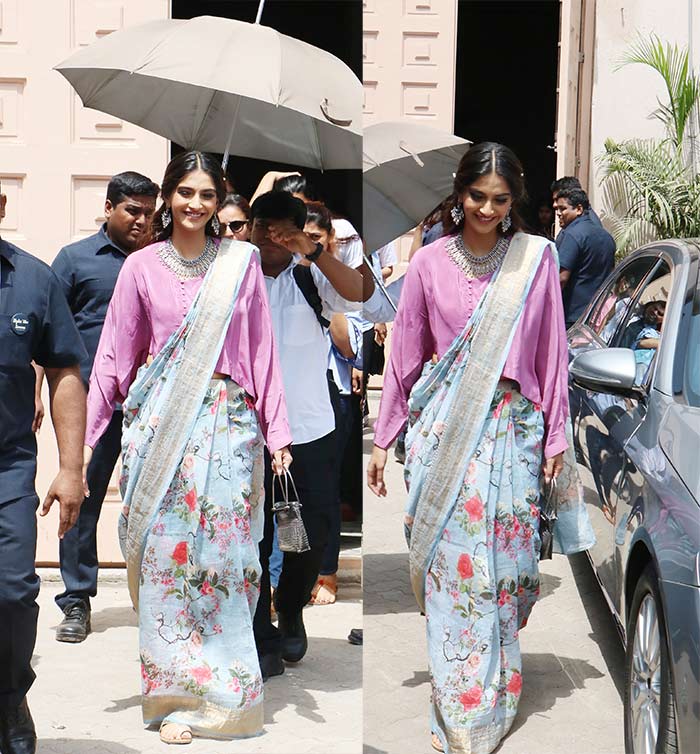 The story revolves around “Four girls on their way to find true love. However friendship this strong does have its consequences,” as per IMDB.

Veere Di Wedding will be released tomorrow all over India and all the people who have been waiting to catch the flick can finally do so. The movie has been directed by Shashanka Ghosh and produced by Anil Kapoor, Rhea Kapoor, Nikhil Dwivedi and Ekta Kapoor.

This is Sonam Kapoor’s first release after her high profile wedding in Mumbai and was attended by the glitterati. She tied the knot with businessman Anand Ahuja in a traditional ceremony surrounded by family and loved ones.