What exactly does it mean to be “Muslim-American”? This is something that—in the midst of Middle East conflicts, political strife, and terrorism—no one in the U.S. really gets a glimpse of—until now. 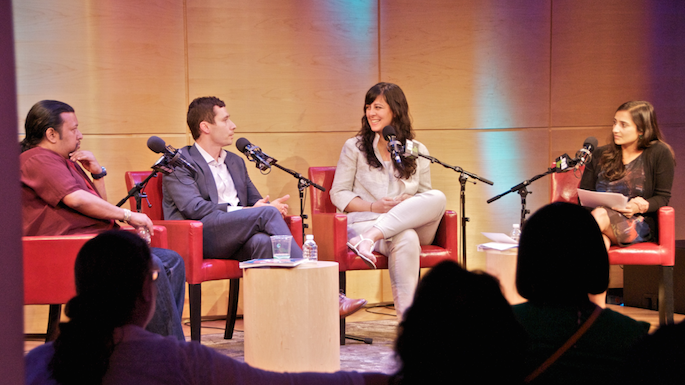 Also Read - Muslim Woman Set on Fire in New York City, Adding to the List of Violent Attacks towards Muslims

What exactly does it mean to be “Muslim-American?” This is something that—in the midst of the Middle East conflicts, political strife and terrorism—no one in the U.S. really gets a glimpse of, until now. So, what do you get when you gather three creative Americans from Muslim backgrounds, for an uncensored, propaganda-free panel? Also Read - Everything you Need to Know About the First Muslim American Presidential Nominee for Federal Judgeship

“Muslim/American,” a four-part cultural series presented by WNYC and WQXR concluded on Thursday, May 28, with a moving and versatile “Storytelling” panel at the multimedia performance venue, The Greene Space. The first of its kind in New York City, the interactive series had a live audience that examined the cultural intersections of Muslim and American identities. The audience included young South Asians college students to older Jewish and Christian New Yorkers. Also Read - Khizr Khan's Speech at DNC Stirs Emotions, Sparks Response From Donald Trump

The panel was hosted by WNYC producer and book critic Mythili Rao, who said the series was inspired by the lack of coverage featuring a real Muslim-American perspective.

“This is a community that’s in the news a lot, and it’s often related to Islamophobia and terrorism,” Rao said. “‘Muslim/American’ explores Muslim culture and identities in the United States and showcases how they’re leading rich lives through food, fashion, TV—that have often little to do with all the scary headlines and political elements.” 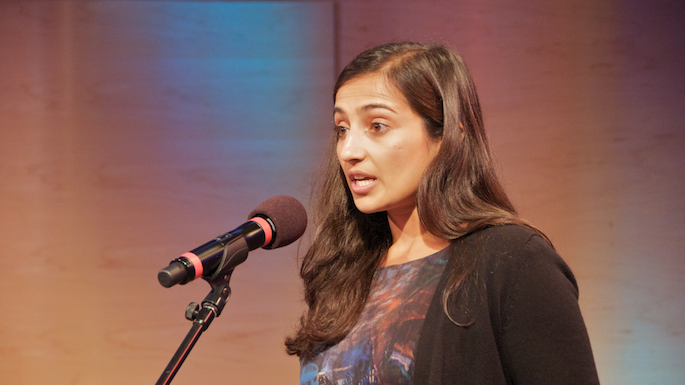 The panelists included comedian and performer Alaudin Ullah (pronounced “Aladdin”) and authors Sadia Shepard and Kenan Trebincevic. All three were picked by Rao because of their personal backgrounds.

“I was very captivated by all their stories; they have phenomenal family stories and are all creative, keen observers of the world,” Rao said.

Ullah, Shepard and Trebincevic, read from their works and shared personal anecdotes about their geographical and spiritual journeys about growing up as modern day Muslims in the U.S.

And their stories are indeed captivating. Ullah is a first-generation Bengali-American, he lived in Spanish Harlem with observant Muslim parents. At present, he stars in his own one-man show called “Dishwasher Dreams”—a skillfully humorous play about his father’s journey from East Bengal to New York in the 1930s, and a reflection of Ullah’s own upbringing, immigration issues and family quips. 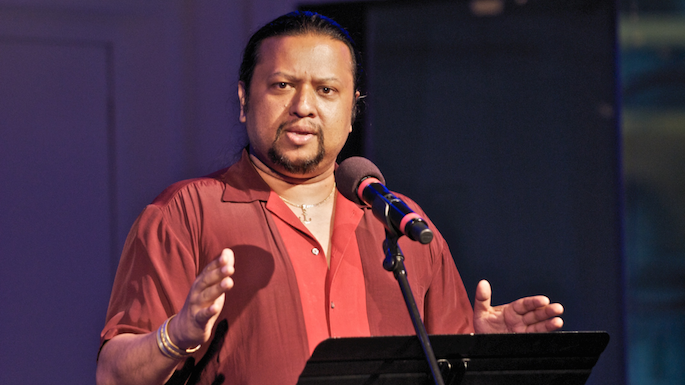 He ignited laughs in the audience as he recalled a moment when he “hustled” his mother for a pair of Kareem Abdul-Jabbar sneakers, she asked if the famous basketball player was Muslim and only then would she be more willing to buy the shoes. Despite his constant rebellion, Ullah said, “Dishwasher Dreams” was inspired by his frustration of repeatedly playing stereotypes in Hollywood.

When he was preparing for his audition as a Middle-Eastern prince/terrorist in a major film, he got fed up—he knew better than to play something that was such a misrepresentation, and ultimately, an insult to what the “American Dream” was all about.

“When I asked the producer, ‘Well, do you know any Muslims who really talk like this?’ he replied, ‘Well, do you want the part or not?’” Ullah said. “I was told to play parts with a ‘Muslim accent,’ and really—I just didn’t want to contribute to the stereotype.”

Now, Ullah thrives in the grittier comedy scene, where he is able to beat stereotypes in a more powerful and light-hearted way.

“Comedy’s one of the best weapons to point out hypocrisy and combat bullshit,” he said. “When I was touring with Chris Rock in the South, I got a lot of racist comments, like—‘Your family’s really not involved in something [terror related] in the Middle East?’—and as a comedian, you’re able to make people look at things differently, even if they already have an image in their minds.” 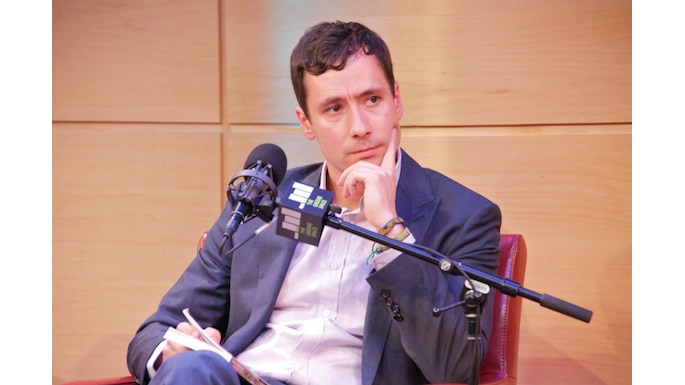 Trebincevic’s journey to America is not so humorous, though. After fleeing from what was Yugoslavia in 1993—in the midst of a war that was exterminating Muslims—11-year-old Trebincevic and his family settled in Connecticut with the hope of going back home someday. However, that hope was soon destroyed when Bosnia lost the war and they realized they could never return.

He recounted the systematic discrimination he faced in Yugoslavia when his Serbian friends began turning him away during soccer, and his once-beloved karate coach showed up to his home with an AK-47, threatening him and his family to leave or get arrested.

Although he eventually made a home in New York City and is now working as a physical therapist, Trebincevic cannot forget the betrayal his family faced. He set out to make a list—and eventually penned it, with the help of New York Times bestselling author and journalism professor Susan Shapiro and Penguin Press, calling it “The Bosnia List”—of all the things he needed to do when he planned a visit back to his homeland 20 years later.

His list included some brutal confrontations he was desperate to make: his former next door neighbor who stole from his mother, the concentration camp where his father and brother were imprisoned, and a visit to the grave of his first betrayer. His memoir has now been picked up by some college and high schools in their history, religion, anthropology, creative writing, and literature curriculums.

This experience of escape and betrayal is what he has now connected his Muslim identity with.

“The first time I felt a sense of a Bosnian-Muslim community was when I moved to Astoria, Queens at [age] 27—with all the restaurants, food, and some Bosnian people,” Trebincevic said. “For me, the Muslims connection is more cultural and about what my people went through; I’m not observant, I go to bars, I drink, I was never brought up Muslim. I was bought up Bosnian.” 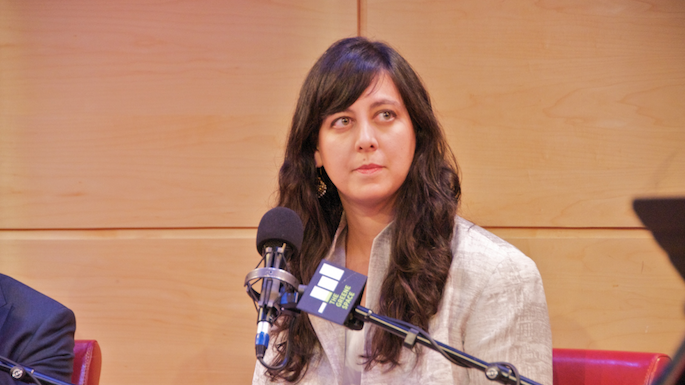 Shepard, on the other hand, is the epitome of “the melting pot.” She grew up in Boston with a Muslim mother, Christian father, and Jewish-turned-Muslim grandmother. She wrote “The Girl From Foreign” after promising her late grandmother that she would find out where her Jewish-Indian tribe was now.

“Storytelling has been central to everything I do; my mother and grandmother were tremendous storytellers, and the idea of my own identity was formed by the stories they told me about growing up in Bombay and Karachi,” Shepard said.

Growing up both interracial and interfaith, Shepard’s family worked hard to create a home that was a balanced mixture of influences, but also welcomed many different perspectives and made an effort to make people feel comfortable. Living in the Diaspora, Shepard struggled with deciding what practices, rituals, and stories she was going to carry forward.

“The Muslim-American experience and identity includes many different definitions; it’s not just that we come from diverse countries, but that our identity can encompass such a diversity of ideas that shape what it really means to be Muslim-American,” she said.

Although their diverse journeys ultimately lead to similar paths—obtaining an identity of who they want to be in the U.S.—all three panelists’ religious affiliations show a different side to the perception many Americans have of Muslims, being Muslim has become almost synonymous with being religious or observant. However, almost all the panelists denied being observant.

Ullah, who defined himself as an “Agnostic Atheist,” says his lack of Islamic faith doesn’t mean he’s abandoned his Muslim family.  Trebincevic said he’s Bosnian first, Muslim second, and Shepard—who is very proud of her Muslim background and has named her first child Noorjahan, a Pakistani-Muslim name—said she isn’t religiously observant.

“I had a friend once say, ‘Oh, well, your God is Allah, that’s not my God.’ And I said, ‘Well, Allah just means God, literally,” Trebincevic said, when discussing some of the responses he still gets when being identified as Muslim, although most people take him to be “just a European named Kenan.”

Both Ullah and Trebincevic don’t deny that there is hypocrisy in the Muslim community as well—as with many religious communities.

“I have Muslim friends who drink, smoke weed, party, and then they get on my case for not being religious,” Ullah said. Trebincevic agrees, “Does you praying five times a day make you more Muslim than me? Is there a level of hierarchy?”

What most of us can agree from the “Storytelling” panel, and the entire “Muslim/American” series, is that the conversation about the first and second-generation Muslim-American experience is long overdue. This dialogue—uncensored and unfiltered—should happen in a country that is constantly bombarded with Islamic issues and news, and it should happen often. When delved into, the Muslim-American experience can be like no other.

“That’s exactly what it’s all about, you know, humanizing this community,” a New Yorker waiting in line to speak to Shepard said. “Most of us won’t admit it, but, we already have something engrained in our minds about Muslim-Americans and Islam, but the experiences that they’ve shared tonight—it’s eye-opening and so necessary.”

If you could not attend, the entire Muslim/American series can be streamed online. To watch, or re-watch, all four panels, visit: http://www.thegreenespace.org/series/muslimamerican/.