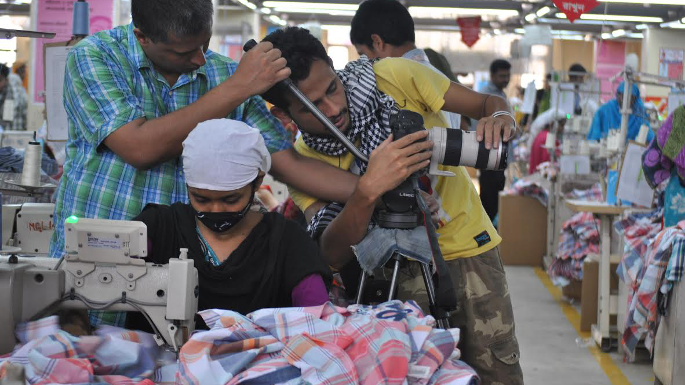 [A shot of filmmaker Mohammad Romel and Rizvi shooting their film “Workers’ Voices” at a garment factory in Bangladesh| Photo Courtesy: Chaumtoli Huq]

For more than 15 years, Huq, also editor of the blog Law@theMargins, has worked on labor issues in the U.S., including starting the first South Asian Workers Project, which provides legal services to low-wage South Asian workers. Also Read - Democracy 101: Reflecting on the Case of Chaumtoli Huq, One Year Later

The impetus for the documentary came in August 2014 when Huq became researching the working conditions of garment industry workers in Dhaka, Bangladesh. Also Read - Bangladeshi American Settles Suit Over Arrest in NYC

According to Huq’s blog, the documentary aims to highlight the organizing efforts in the garment industry, efforts by workers to educate others on their trade union rights in developing female leadership in the union, as well as ways allies abroad can show solidarity.

Since many garment factories do not put as much as focus as they should on worker conditions, one of the integral parts of the garment-making process, Huq highlights female workers who were putting forth extraordinary efforts to improve their working conditions despite challenges such as extreme poverty, familial barriers including violence, and threats made by garment factory owners.

“It struck me that while I could write about these stories, which I do as a lawyer, activist, and scholar, it would not be as powerful as hearing from workers themselves,” Huq said. “As an advocate, my job [is] to facilitate a process so that those who are most impacted are made visible. The impetus was really the workers.”

Huq’s work on the labor issues comes from the lens of a lawyer and advocate searching for creative ways to highlight the ways in which South Asian workers are affected. She said she believes her partnership with Romel, who has more than 10 years experience of working as a documentary filmmaker and previous experience working on films for the International Labour Organization (ILO), is an ideal meeting of the minds.

She added: They both understand the reasons why this labor issue in the garment industry is important and can help translate it to a wider audience.

While interviewing women workers, Huq found that they were more vocal supporters of unions because they believe cultivating women’s leadership can help them obtain benefits that are often ignored such as maternity leave.

One such woman, Anju Begum, discussed the role of women in the labor moment in the video clip below. As the Bangladesh Garment and Industrial Workers’ Federation (BGIWF) trade union leader, Begum, was trained by the BGIWF and now consciously advocates for the importance of women’s leadership.

What struck Huq during this interview with Begum was the collaborative and cooperative nature of her leadership efforts.

“She is not saying, ‘I am [a] leader, follow me.’ She is saying: ‘now that I am a leader, I have a responsibility to lift others up to be leaders,’” Huq said. “Its a more collective approach to leadership, than a hierarchal one. I think the feminist movement, often influenced by elite women can learn from this style of leadership.”

Huq has observed that while all workers, including women experience severe hardships in the garment industry (i.e. recall workers make roughly $66 a month), women are still determined and resilient enough to organize for change.

“For women who are victims of violence or experience the economic violence of poverty, we also think they are incapable of asserting their rights because they are poor and helpless,” Huq said.

Huq said there are many stereotypes about South Asian women as being submissive or docile and there is another layer of complexity to consider when we think about Muslim women. There is a prevailing notion that they need to be advocated for by others.

“The recent debate around India’s Daughter where one critique was that it failed to show the ways in which Indian women and feminist groups were organizing against the rape culture in India and globally is perhaps one example of that stereotype at play,” she said. “But I hope the documentary can capture some of that [inalienable human spirit] and change how we think about [South Asian] women and poor people.”

Through the documentary, Huq and Romel hope to share inspiring personal stories about hardworking garment factory workers as they navigate their many identities, both professional and personal.

Huq said she hopes the documentary’s stories will resonate across boundaries.

They began filming in Dhaka, Bangladesh and hope to showcase their film in May in New York City at the Workers Unite Film Festival, a celebration of global labor solidarity. The festival aims to show student-made and professionals films nationally and worldwide, which showcase the struggles and daily lives of workers as they organize for social justice.

“Based on what I have seen [from the Workers Unite Film Festival], many documentaries cover a campaign [and] are done for explicitly advocacy purposes,” Huq said.

Learn more about the film and how you can support – financially and otherwise – at the Workers’ Voices GoFundMe page. 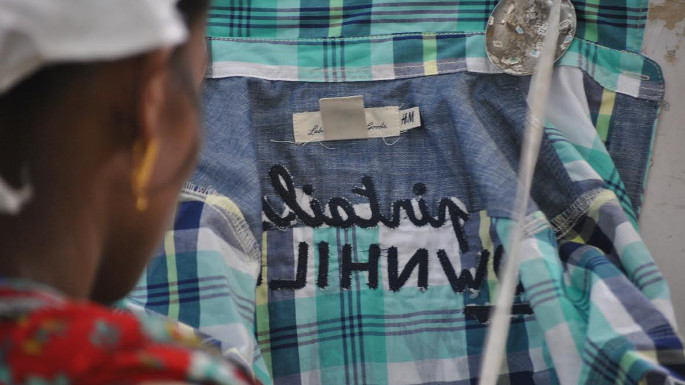 “Any amount counts as we want to show that there is a broad base of support that wants to hear the stories of workers themselves who are organizing to improve their working conditions,” Huq writes on her blog.

Huq was arrested Sept. 2015 in Times Square without probable cause while waiting for her husband and children on a sidewalk. She filed a complaint against the NYPD and has spoken out about the humiliating and unlawful incident.

[Read Related: Bengali-American Woman Files Suit Against NYPD for Arresting her Without Probable Cause]