New Delhi: Former Uttar Pradesh Chief Minister and Samajwadi Party chief Akhilesh Yadav on Wednesday again poked fun at Uttar Pradesh Chief Minister Yogi Adityanath when he shared a picture of him having a meal with his lookalike, who has been accompanying him on the election trail.Also Read - Rampur: FIR Registered Against Azam Khan For Threatening Witness In Land Encroachment Case

Click here for all updates on Lok Sabha elections 2019 Also Read - New Ayodhya: All You Need to Know About Ram Janmbhoomi Turning Into Eco-Friendly Vedic City in Uttar Pradesh

Akhilesh Yadav had weeks ago tweeted a similar picture of a man clad in saffron and his head shaved, and along with wrote, “We could not get a fake God but we got a Baba. He has left Gorakhpur and will now tell everyone the truth about this government.” Incidentally, Uttar Pradesh Chief Minister Yogi Adityanath wears a saffron robe and has a clean-shaven head- just like the ‘Baba’ in Akhilesh Yadav’s picture. The incumbent CM is a five-time MP from the Gorakhpur constituency. Also Read - Uttar Pradesh Gears Up To Inaugurate Its First Table Top Airport In The Spiritual Lands Of Chitrakoot

This time Yadav tweeted in Hindi:

These comments are in reference to Adityanath reportedly getting his official residence ‘purified’ by ‘Gangajal’ before starting to live in it back in 2017.

The Samajwadi Party chief last week too had traded similar barbs at Adityanath when he posted pictures of the ‘baba’ sharing the dais with him while on stage at a Lucknow rally.

The man identified as Suresh Thakur alias Yodha was clad in saffron clothes and sported a clean-shaven look- just like Uttar Pradesh Chief Minister Yogi Adityanath. He came on stage in the middle of Yadav’s speech and waved at the crowd. 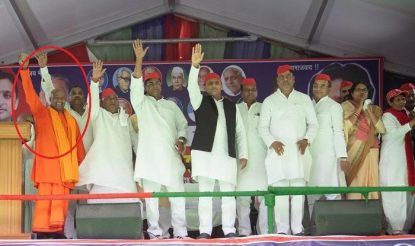 While he greeted and waved at the supporters, Akhilesh Yadav attacked the incumbent BJP government in state and mounted an attack on Adityanath for the encounters that took place under his eye. “UP main thoko niti chalane wale bhi hain. Batao yahan pe shiksha mitra thuke the ya nahi thuke the?Koi nahi bacha hai jo na thuka ho.Batao thoka gaya ya nahi thoka gaya? Isliye hum kehna chahte hain ki sirf chowkidaar ko hi nahi thokidaar ko bhi hatana hai.” (UP has those who run an ‘encounter government’… You just don’t have to vote out the Chowkidars but also these encounter specialists.)

The Adityanath-led BJP government in UP had come under severe criticism for passing orders to gun down several suspected notorious criminals, they thought were running amock in the state. There was little or no reportage on these police encounters and many raised concerns on the BJP regime only hunting down Muslims.

Yogi Adityanath, on the other hand, had harped how he wiped criminals off the face of Uttar Pradesh.