The others making up the list are Andhra Pradesh's Jagan Reddy-led YSR Congress Party at #2 with a total of Rs 1.04 crore on advertisements, according to the report.

New Delhi: Among the political advertisers on Google, the Bharatiya Janata Party (BJP) has aced the list with an advertisement spent share of around 32 per cent. The Congress lags way behind at #6 with a meagre 0.14 per cent share. (Catch LIVE Updates of Lok Sabha Elections 2019 Here) Also Read - On BJP's Free Vaccine Promise in Bihar Poll Manifesto, EC Says 'Not Violative of Model Code' 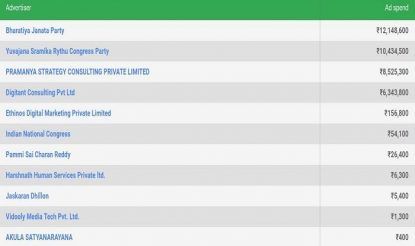 Meanwhile, the others making up the list are Andhra Pradesh’s Jagan Reddy-led YSR Congress Party at #2 with a total of Rs 1.04 crore on advertisements, according to the report.  Pammi Sai Charan Reddy, another advertiser, spent Rs 26,400 to promote YSR Congress Party candidates.

Pramanya Strategy Consulting Private Limited, which was promoting the Telugu Desham Party (TDP) and its chief Chandra Babu Naidu, was ranked third with an advertisement expenditure of Rs 85.25 lakh, the report said.

Digital Consulting Pvt Ltd, another entity that also promoted Naidu and his party, was ranked fourth with a total spending of Rs 63.43 lakh. Google also blocked advertisement of four of 11 political advertisers due to violation of its ad policy, it said.

In a statement, the tech giant said, “Our goal is to provide greater transparency in political advertising on Google, YouTube, and partner properties. This report includes information about Lok Sabha election ads that feature or are run by a political party, a political candidate, or a current member of the Lok Sabha.”