Set For Second-PM Term, Narendra Modi at NDA Meet Says Minorities Feel Cheated, We Have to Stop it | Updates

President Ram Nath Kovind on Saturday appointed Narendra Modi to the Office of Prime Minister of India after a BJP-led NDA delegation submitted a letter of support for Modi to be the next Prime Minister.

The NDA MPs met at the Parliament’s Central Hall to give their assent to Modi’s second term as the Prime Minister of India. By voting in favour, the congregation set in motion the process to form the 17th Lok Sabha. Also Read - Parade, Parakram And Pride: India Witnesses Many Firsts at 73rd Republic Day Ceremony

Click here for all updates from the 2019 Lok Sabha elections Also Read - All Must Remain Alert, Continue Precautions Against COVID: President Kovind in His Address to Nation

After being voted unanimously as the next Prime Minister, Narendra Modi addressed the NDA meet and expressed his gratitude to all the MPs and the national mandate.

In his over 75-minute address after being elected the leader of the BJP-led National Democratic Alliance, Modi said the massive mandate has multiplied responsibilities, and advised lawmakers on their public conduct, saying they should avoid speaking to the media for publicity and shun the “VIP culture”.

However, it was his suggestion to the MPs in his maiden speech to them.. that they work without any discrimination and win the trust of minorities… that stood out as the alliance, especially the BJP, is often criticised for being indifferent to their concerns and not pursuing inclusive politics.

“Our mantra should be ‘sabka saath, sabka vikas and sabka vishwas’ (with all, for everybody’s development and having everyone’s trust),” he said in the speech which he began by bowing to the Constitution. 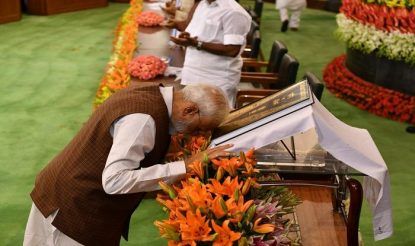 “They (minorities) cannot be handed over to them (Opposition), who benefit because we keep quiet,” Modi said at Parliament’s Central Hall, accusing his rivals of making minorities live in fear and exploiting them during elections as part of their vote-bank politics.

We Have to Earn Trust of Minorities, Strive For ‘Sabka Vishwas’: PM Modi’s Top 10 Quotes From NDA Meet

In addition, President Ram Nath Kovind on Saturday appointed Narendra Modi to the Office of Prime Minister of India after the BJP-led NDA delegation submitted a letter in favour of his candidature.

President Kovind had on Friday dissolved the 16th Lok Sabha with immediate effect on the recommendation of the Union cabinet. The President had accepted the resignation of PM Modi and his council of ministers but asked them to continue as caretaker until the formation of a new government.

HERE ARE ALL UPDATES FROM THE NDA MEET: 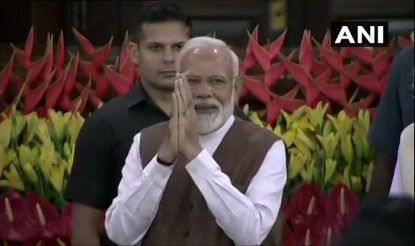