Many exit polls have predicted that the BJP will sail past the majority mark of 272 on its own.

New Delhi: Exit polls on Sunday were unanimous in predicting another term for the NDA under the leadership of Prime Minister Narendra Modi. In fact, many of them projected over 300 seats to the NDA, seeing it sail past the 272 majority mark in the Lok Sabha.

Interestingly, a clear projection did not emerge from Uttar Pradesh, one of the most crucial states as it sends 80 MPs to Lok Sabha. While ABP-Nielsen said the BJP’s tally may fall to 22 from 71, some like News18-IPSOS and News 24-Chanakya predicted a face-saving tally of 60 seats.

However, in West Bengal and Odisha, the saffron party was projected to make major gains.

However, ABP News-Nielsen and Neta-News X disagreed and they predicted 242 seats for the ruling NDA.

Elections to 542 seats ended on Sunday and counting of votes is slated for May 23.

Meanwhile, as far as the vote share is concerned, News18-Ipsos gave 49 per cent to the ruling alliance, which is way better than its 39% in 2014.

Congress-led UPA seems to have improved from the last time with News 18-Ipsos, India Today-Axis and News 24-Chanakya predicting 82, 77-108 and 86-104 seats but it will still be a poor second. 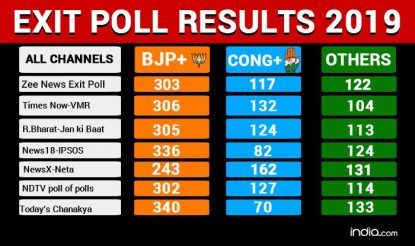 ABP News-Nielsen and Neta-NewsX predicted 127 and 164 seats respectively for the UPA.

In UP, some exit polls predicted that the SP-BSP alliance was likely to race ahead of the BJP. In 2014, the BJP and Apna Dal managed to win 71 of the 80 seats in 2014 though by 2019, the number was slightly down to 68 with defeats in last year’s by-polls.

The CVoter-Republic forecast gave the grand alliance in UP 40 seats against 38 for the NDA, while the Jan Ki Baat said the NDA may win 46-57 seats against 15-29 of the SP-BSP combine.

ABP News predicted a huge loss for the BJP, saying it may get only 22 seats while the Opposition alliance may emerge victorious in 56 constituencies.

On West Bengal’s 42 seats, CVoter-Republic and ABP respectively gave 11 and 16 to the BJP. News channel ABP said the BJP may win nine seats in Odisha. It had won only one in 2014.

Meanwhile, poll pundits predicted a clean sweep for the saffron party in Madhya Pradesh, Maharashtra, Rajasthan, Chhattisgarh, Uttaranchal, Haryana and Delhi. Andhra Pradesh may go the TDP though there isn’t a clear number on it and some polls are predicting a YSRCP win while Telangana seems headed for a TRS sweep.

In Karnataka, it is likely to race ahead of the Congress-JD(S) even as it may fail to open its account in Kerala.

Bihar is also likely to see the NDA bag 30 seats while the Opposition alliance seems poised to win just 10. Gujarat is also going the NDA way with 22 seats likely in its kitty. Meanwhile, Tamil Nadu will see major gains for Congress-DMK alliance.