Kolkata: West Bengal Chief Minister and Trinamool Congress (TMC) leader Mamata Banerjee on Tuesday announced the list of candidates for all the 42 Lok Sabha seats of the state. She said that the outgoing TMC lawmakers whose names do not figure in the list will be drafted for party work.

With this, she also made another major announcement saying the party will field 40.5 per cent women candidates as opposed to 35 per cent women MPs in 2014. Claiming that it was a proud moment for the TMC, Banerjee even announced the names of two of the candidates.

She said that Moon Moon Sen will be TMC’s candidate from Asansol and Satabdi Roy will fight from Birbhum district. The TMC will also contest some seats in Odisha, Assam, Jharkhand, Bihar and the Andamans, she added.

Here’s a look at the list of candidates released. 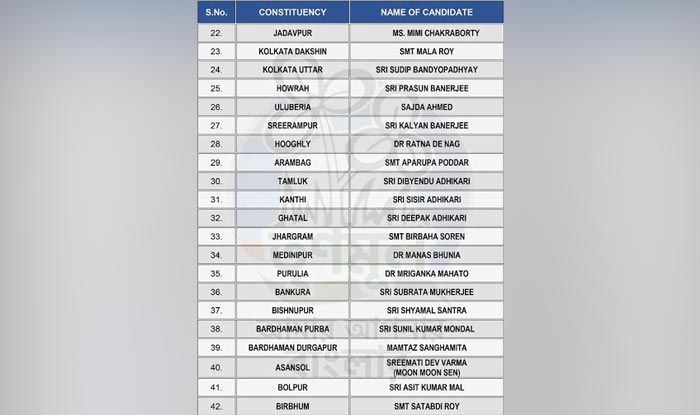 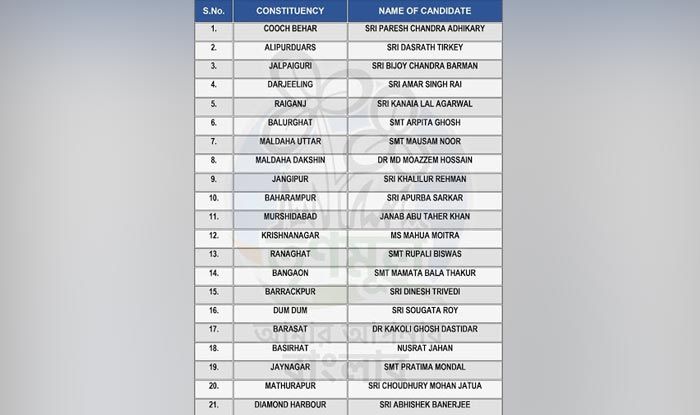 Claiming that she had information about VVIPs who were using helicopters and chartered flights to transport money to bribe voters, Banerjee also asked, “Why is the BJP so scared that they have had to space out the vote in Bengal?” Upon releasing the list, the West Bengal CM attacked the Centre over several issues stating how the Narendra Modi-led government had failed the people in the last five years.

Claiming that the TMC believed in maintaining the communal harmony and unity of the country, Banerjee alleged that an atmosphere of fear was being created. She added, “Unemployment has increased, farmers are committing suicide. Farmers, Adivasis, Dalits, women are being persecuted. The youth are being harassed and neglected. Institutions have been politicised.  An undeclared emergency is worse than a declared emergency.”

She went on to question the Uri and Pulwama attacks asking as to why and how many jawans lost their lives. She claimed that terrorism had increased 260%, in a sharp attack on the BJP. She said, “In the name of strikes, extremism is being promoted with ulterior political motives.”

Calling the Lok Sabha elections 2019 a challenging one, Banerjee further stated that the Constitution had been destroyed for political reasons.