Lok Sabha Election 2019: All You Need to Know About Mizoram Seat

Lok Sabha Elections 2019: Mizoram, one of India’s smallest states, only sends one MP to represent the state in the lower house. The seat is reserved for Scheduled Tribes (STs).Also Read - Congress Chintan Shivir: Party Discusses Role of EVMs in Poll Debacles, Ponders Over Strategy to Find Back Winning Ways

Notably, the polling for the upcoming elections 2019 will be held in a single phase on April 11. The counting of votes will take place on May 23. Also Read - Age is Just a Number! At 87, Former Haryana CM Om Prakash Chautala Passes Class 10th and 12th

The state is a Congress stronghold. Congress won the Lok Sabha elections here in 2014 as well as 2009. However, the Mizo National Front won the assembly elections in 2018 by winning 26 seats in the 40-member House. Also Read - Judge rejects Donald Trump’s Lawsuit Challenging His Permanent Ban from Twitter

For the upcoming elections, the BJP has contested Shri Nirupam Chakma for Mizoram seat, while the Mizo National Front has fielded C Lalrosanga for the ST seat.

Counting of votes: May 23

Number of Lok Sabha seats in the state: 1 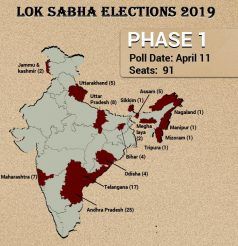