'NaMo' are widely-recognised Hindi initials of Prime Minister Narendra Modi, previously seen on BJP merchandise and recently as the name of a TV channel.

Some security personnel on election duty in Noida were served meals in packets labelled “Namo Foods”, triggering criticism from the opposition even after the local police said the packs only displayed the name of the food shop. The Bahujan Samaj Party said it has complained to the Election Commission. Also Read - Nand Kumar Singh Chauhan, BJP MP From Khandwa, Dies After Battle With COVID-19

The packets were brought in the boot of a hatchback and distributed among police personnel in Noida’s sector 15A around 9.30 am, while polling was on in the Gautam Buddh Nagar constituency under which the Delhi suburb falls. Also Read - Laga Bhi Dia, Pata hi Nahi Chala: PM Modi to Sister P Niveda After Receiving Covaxin Jab 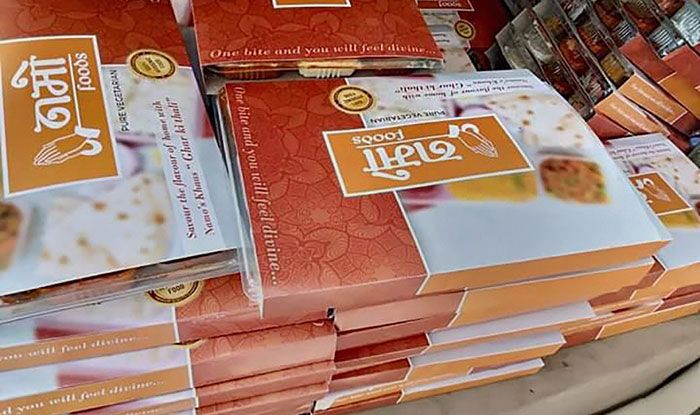 The food packets that were served in Noida. Photo Courtesy: IANS

The packets, coloured in a shade of saffron, had ‘Namo Foods’ emblazoned on top in Hindi. They soon started generating a buzz among curious onlookers.

When contacted in Lucknow, Uttar Pradesh Chief Electoral Officer L Venkateshwarlu said he has already spoken with the district magistrate on the issue.

It is nothing related to the prime minister as the name of the company itself is Namo,” he told PTI.

But the Samajwadi Party president Akhilesh Yadav blamed the BJP.

“Voters are turning out in large numbers to vote for #MahaParivartan which perhaps explains this desperate move. Clearly, the only thing the BJP knows how to do is branding and marketing,” he said, quoting a re-tweet.

The SP’s alliance partner Bahujan Samaj Party said it has contacted the EC.

“We have already taken it up both at the state level and with the Election Commission,” its national general secretary S C Misra said.

Misra also forwarded photographs of the food packets through social media to substantiate his claim.

Earlier, Guatam Buddh Nagar’s senior superintendent of police Vaibhav Krishna issued a statement, saying the packets had nothing to do with any political party.

Misinformation is being spread that some policemen have been distributed food from a political party, he said.

This is absolutely wrong. At the local level, some food packets were procured from Namo Food Shop and not from any political party,” he said.

“Some people are spreading wrong and politically motivated rumours. There is no official order to procure food from any particular food outlet, he said.