Earlier in the day, the Election Commission of India (ECI) took cognisance of Sadhvi Pragya's remark and ordered an enquiry into the same.

Distancing itself from Sadhvi’s remark, the statement released by the party read, “BJP considers him a martyr. This is Sadhvi Pragya’s personal statement which she might have given because of the mental and physical torture she had faced.” (Full coverage on Lok Sabha Elections) Also Read - Demolitions in Delhi: '80% of Delhi Illegal, Will You Destroy All of It', Arvind Kejriwal to BJP

The development came a few hours after the Election Commission of India (ECI) took cognisance of her remark and ordered an enquiry into the same. In addition, the IPS Association too registered their ‘strong condemnation’ against Sadhvi Pragya for her comments on late Hemant Karkare. Also Read - Video: NCP Workers Slap BJP Leader Vinayak Ambekar For Post Against Sharad Pawar 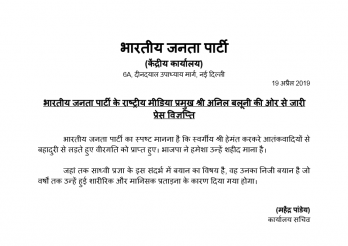 Sadhvi Pragya, who is also an accused in Malegaon blast, on Thursday alleged brutal torture by jail officials, accusing the prison staff of beating her with a thick whip when she was in the custody.

Narrating her ordeal, while addressing the party workers, she informed that she was thrashed day and night mercilessly. She said that she was in the prison custody for 13 days and had to undergo torture on all the days.

The Bharatiya Janata Party (BJP) on Wednesday had fielded Malegaon blast case accused Sadhvi Pragya Singh Thakur in Lok Sabha elections from Bhopal against Congress heavyweight and former Madhya Pradesh chief minister Digvijaya Singh. Out on bail, Thakur has been discharged by a court on charges under the stringent Maharashtra Control of Organised Crime Act (MCOCA) in the 2008 case but is still facing trial under other criminal provisions.