Of the eight seats in Uttar Pradesh which go to polls in Phase 1 on April 11, only Kairana isn't held by the BJP. Interestingly, 2014 had seen even Kairana go to BJP's Hukum Singh.

Lucknow: The first phase of elections to Lok Sabha will see political families and stalwarts vying for a seat from Uttar Pradesh. Of the eight seats in Uttar Pradesh which go to polls in Phase 1 on April 11, only Kairana isn’t held by the BJP. Interestingly, 2014 had seen even Kairana go to BJP’s Hukum Singh. Also Read - West Bengal: Suvendu Adhikari Resigns as State Transport Minister, Cracks Widen In Trinamool Congress

Singh’s death saw his daughter Mriganka Singh fight in his place in last year’s by-poll and lose to RLD candidate Tabassum Hasan. So this time, the saffron party has fielded Pradip Chaudhary. Another interesting factor this time around is how Tabassum Hasan, who won the 2018 elections on an RLD ticket, is now fighting on an SP ticket.  The Congress has fielded former MP Harendra Malik against Tabassum. Malik’s son Pankaj has emerged as a youth leader so the party is going to work doubly hard to win this seat. Also Read - Amarinder Singh Condemns Haryana Govt's Attempts To Prevent Farmers March To Delhi 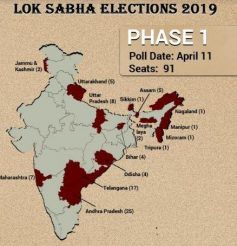 The Chaudhary family is also set on fighting tooth and nail. Chaudhary Charan Singh’s son Ajit Singh and grandson Jayant Chaudhary are both fighting in the first phase itself. While Ajit Singh has opted to fight from Muzaffarnagar this time, he left his Baghpat seat for son Jayant. The RLD has considerable influence over the Jat community but Muzaffarnagar saw riots and locals feel the RLD didn’t do enough for them in their hour of need.

Three Central ministers; V K Singh, Dr Satyapal Singh and Dr Mahesh Sharma are also trying their luck in the first phase itself. Gen Singh is the BJP candidate from Ghaziabad, Dr Singh from Baghpat where he is in a direct fight with Jayant and Dr Sharma from Gautam Buddh Nagar.

Western Uttar Pradesh has pockets of Muslim majority and the emergence of a Muslim face would be worth looking out for. Meanwhile, Bhim Army and Bharatiya Kisan Union would also play crucial roles in the first phase. While both the outfits have claimed to be apolitical, the BKU, because of sugarcane farmers’ woes, could influence the voter with many seats in the first two phases falling in the sugarcane belt.