‘With Rahul Gandhi’s Midas Touch, no Deal is Too Much’: Amit Shah Targets RaGa Over Alleged Scorpene link

Amit Shah lambasted Rahul Gandhi over alleged Scorpene link, states 'With Rahul Gandhi’s Midas Touch, no deal is too much'.

As per the media report, Ulrik Mcknight, who was the co-owner at BackOps, acquired defence assets under UPA regime. The report claimed that Rahul Gandhi had a 65 per cent while Mcknight had 35 per cent stake in Backops between 2003 and 2009, when it was wound up. 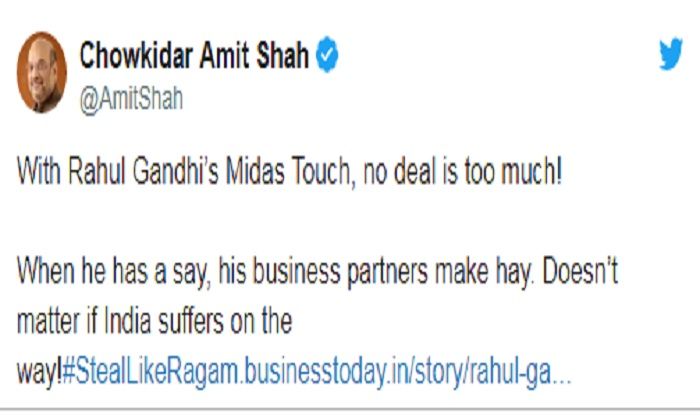 However, after that McKnight acquired offset contracts from French defence supplier Naval Group against Scorpene submarines in 2011. He also went on and signed a contract with a Visakhapatnam-based firm for the supply of critical parts for the Scorpene missile, a report in Business Today said.

The Indian firm Flash Forge also acquired a UK-based company named Optical Armour Limited in which Mcknight was given directorship. He also had 4.9 per cent shares in it. For the record, the Indian and European companies associated with Rahul Gandhi were dissolved before the Naval Group engaged in a contract with Flash Forge, the Business Today report said.

The website of the Naval Group refers to a September 18, 2018, event to mark 10 years in business for Naval Group in India. “Naval Group in India was created in 2008 as a 100 per cent-owned subsidiary of the group to ensure a long-lasting presence in the country, thereby demonstrating the strong commitment to the Indian Navy.

“This partnership led to the emergence of an industrial ecosystem which fosters the indigenous manufacturing of submarines,” it says.

Earlier in the day, while addressing a press conference, Gandhi had dismissed the report,  saying, “Please undertake any investigation you want, do any inquiry you want, I am ready as I know I have not done anything wrong, but please also investigate.”