During the meeting, the Andhra Pradesh Chief Minister designate would discuss providing outside or issue-based support to the Modi government, stated sources on Saturday.

New Delhi: YSRCP chief Jaganmohan Reddy met Prime Minister Narendra Modi in the national capital on Sunday and reportedly invited him for his swearing-in ceremony as new Chief Minister of Andhra Pradesh on May 30. V Vijaya Sai Reddy and other leaders of the party were also present at the meeting. Notably, Jaganmohan Reddy had also met BJP President Amit Shah on the same day.Also Read - By-Election Result 2022: List Of Winners From 3 Lok Sabha, 7 State Assembly Seats

Jaganmohan Reddy’s party stormed to power with a landslide victory in Andhra Pradesh elections on Thursday. The Andhra Pradesh Chief Minister designate was expected to discuss providing outside or issue-based support to the Modi government in the meeting, stated sources on Saturday. Also Read - 'Bavarian Band, Indian Diaspora': PM Modi Receives Warm Welcome In Germany Ahead Of G7 Summit | Watch 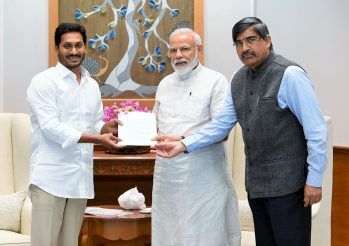 Reddy will take oath as the new Chief Minister of the state on May 30 at Indira Gandhi Municipal Stadium in Vijayawada. Earlier on Saturday, he was unanimously elected as the leader of the YSRC legislature party.

Thanking the MLAs for electing him as the legislature party leader, Reddy had said, “in 2019, people voted for us out of faith and belief, in 2024 they should give us a bigger mandate because of our performance.”

A YSRCP legislator reportedly said that Reddy had also sought the support of the newly-elected MLAs to help him earn the “performing Chief Minister,” within a year. 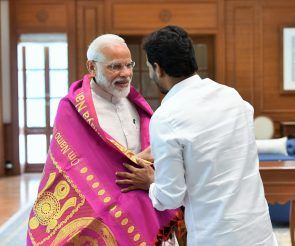 The meeting assumed significance as YSRCP chief had said that his party would support whoever promises Andhra Pradesh the Special Category Status.

In a spectacular performance, Reddy’s party had won 151 of 175 Assembly and 22 of the 25 Lok Sabha seats in Andhra Pradesh, the elections for which were held on April 11.