The fire, caused by suspected leakage from the 18-inch pipeline of GAIL India Ltd, devastated the village near the Tatipaka refinery of the Oil and Natural Gas Corp (ONGC), about 550 km from Hyderabad. 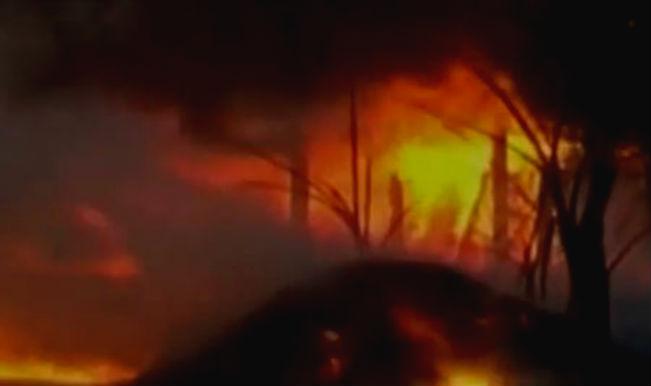 Hyderabad/New Delhi, June 27 : Fifteen villagers were burnt to death and 30 injured Friday as a huge fire and deafening explosions caused by a suspected leak engulfed a GAIL gas pipeline in Andhra Pradesh, officials said. The central government ordered a probe and announced ex-gratia payment of Rs.2 lakh each to the next of kin of those killed. Also Read - Delhi Has Crossed Peak of Second Coronavirus Wave: Arvind Kejriwal

As flames several meters high leapt from the pipeline passing through Nagaram village in East Godavari district, several of the villagers jolted out of sleep by the blasts failed to escape the blaze. The dead include three women and three children. Officials said the fatalities could rise as the condition of 15 of the injured was said to be critical. The fire, caused by suspected leakage from the 18-inch pipeline of GAIL India Ltd, devastated the village near the Tatipaka refinery of the Oil and Natural Gas Corp (ONGC), about 550 km from Hyderabad. Also Read - 11-Year-Old Delhi Boy Sets Off For Haridwar on His Bicycle After Being Scolded By Mom

“The fire caused massive losses. Coconut trees and other crops in over 10 acres were reduced to ashes,” said Finance Minister Y. Ramakrishnudu. Most villagers were asleep when the disaster struck. Fire tenders rushed to the village to douse the flames. The dead include the owner of a hotel and five of his family members.

Angry villagers attacked the Gas Collection Station near the village and damaged a few vehicles. President Pranab Mukherjee, Prime Minister Narendra Modi and Congress president Sonia Gandhi joined leaders of Andhra Pradesh to express grief over the deaths. The president said he was “extremely saddened” to learn about the accident. Modi added: “My thoughts are with the families of those who lost their lives.”

Cutting short his visit to Delhi, Chief Minister N. Chandrababu Naidu along with Union Minister for Petroleum and Natural Gas Dharmendra Pradhan and senior officials of GAIL and ONGC visited the accident site. Expressing grief at the loss of lives, Naidu consoled the families of the victims and assured all possible help. He said action would be taken against those found negligent. Naidu and the others later called on the injured at a hospital at Kakinada.

Earlier, Pradhan ordered a high-level probe into the incident. He also called for setting up of a statutory body for formulating safety measures for the oil and gas industry. Deputy Chief Minister N. Chinna Rajappa blamed the alleged negligence of GAIL officials for the disaster. Union Minister for Urban Development M. Venkaiah Naidu apprised Modi of the incident.