AAP resorts to a casual look after revolutionising politics

AAP is now on a path of casual ways to meet their needs. 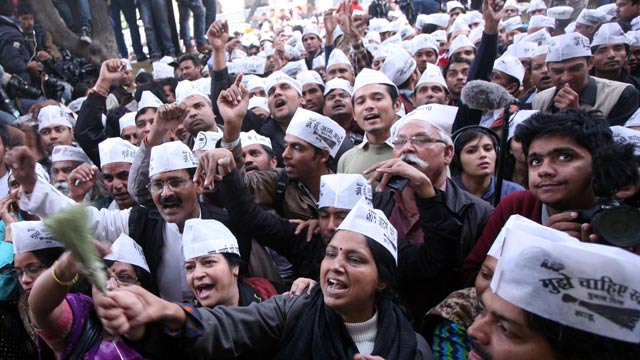 The Aam Aadmi Party (AAP) has not only changed politics in India, but has also set a new sartorial trend for politicians and ministers.

Following in the footsteps of Delhi Chief Minister and party chief Arvind Kejriwal, the six ministers, all first time legislators, turn up for work often wearing the trademark AAP white Gandhian cap that they wore during the party’s campaign.

Visitors to the Secretariat are surprised as none of the ministers fit the stereotype of the traditional minister or politician. Their casual dress style is like the man on the street, or aam aadmi, said many visitors who came to meet them, less than a fortnight after the AAP formed the government in Delhi.

Even an IAS officer, posted in the Delhi government, remarked on their simplicity. “It is unusual that a minister wears a cap and looks like a common man. We have never seen such things in the past,” the senior bureaucrat, who did not wish to be named, told IANS.

The youngest member of Kejriwal’s cabinet, 26-year-old Women and Child, Social Welfare and Languages Minister Rakhi Birla comes to work donning the party cap. Casually dressed in a cotton salwar-kameez, topped with a Nehru jacket, scarf around the neck and sneakers on her feet, Birla shares the eighth floor on the Secretariat with Transport Minister Saurabh Bharadwaj.

Bharadwaj is usually attired in a simple trouser-shirt with a pullover. He is the only minister who rarely wears the party cap to office.

The white Gandhian cap is inscribed on one side with the message “Main aam aadmi hoon (I am a common man)” and on the other “Mujhe swaraj chahiye (I want self-rule)”.

Health Minister Satyendra Kumar Jain and  sit on the seventh floor of the Secretariat.

Jain can usually be seen in jeans, shirt, with a jacket or overcoat and with the white AAP cap on his head while dealing with officials and people.

A party volunteer and close aide of the minister said that Jain does not want to change his dressing style after becoming minister.

“Looking like a common man is the real style of AAP,” another volunteer who did not wish to be named, told IANS.

Bharti is generally in trouser-shirt and Nehru jacket with black leather shoes on his feet. When asked by IANS why he does not wear the AAP cap, he said: “I wear it when I am attending a party meeting. It is a symbol of our party’s objective.”

Surabhi Seth, 34, who had come to meet Bharti later said that she never thought ministers could look so simple.

“I was amazed. I thought they might have changed their attire as they are now ministers but they look the same as they did earlier. Truly, they look like the common man,” Surabhi told IANS.

Education Minister Manish Sisodia and SC and ST, Employment, Development and Labour Minister Girish Soni too dress as casually as before. When IANS met Sisodia, he was wearing a light checked shirt, trousers and coat with the cap on his head.

Soni sits on the sixth floor in a room next to Sisodia.

Chief Minister Kejriwal’s look – simple trouser-shirt with a full-sleeve sweater, mostly in blue or maroon, and a grey muffler around his neck has become the symbol of the common man. Many party members imitate his dressing style by wrapping the same colour scarf around their neck and head. IANS