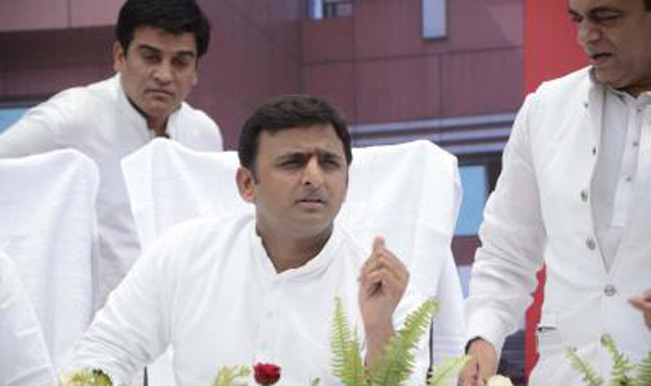 Lucknow, Aug 2: A photograph purportedly showing Chief Minister Akhilesh Yadav with an accused of Saharanpur violence today sparked a controversy but the Uttar Pradesh government was quick to dismiss it as “baseless and misleading”. The photo was posted on the website of a Hindi news daily. It was said to be dated April and lifted from the account of a Samajwadi Party leader on the social networking site. Also Read - JEE, NEET 2020: Lucknow Police Resorts to Lathi Charge Against Samajwadi Party Workers Protesting September Exams

“The news related to photo of the CM with an accused in Saharanpur incident along with other persons is baseless and misleading,” an official spokesman said in a statement here. “The CM meets a number of people everyday. The photo in which the CM is shown with the accused, other persons are also visible. In such a situation, making baseless comment on the basis of a photo is not indicative of healthy democratic traditions,” he added. Also Read - Amar Singh no More: 'Humorous, Known For His Friendship', Condolences Pour in From All Quarters | Who Said What

The spokesman said that law and order was the top priority of the government and it would not compromise on that. “The photo is being circulated by some elements with the intention of misleading the people and malign the image of the government,” he alleged. The spokesman said that the accused in question had been arrested and action as per law was being taken. “Stern action will be taken against criminals disturbing peace in Saharanpur,” he said.

Akhilesh was earlier targeted by the opposition for reportedly meeting Maulana Nazeer, against whom a case has been registered for allegedly inflaming communal tension in Muzafarnagar, in Lucknow in September. The state government had yesterday ordered a high-level administrative inquiry into the violent clash in Saharanpur on July 26, which left three persons dead and over 30 injured. As many as 165 shops and handcarts and 42 vehicles were set ablaze during the violence. The inquiry report will be submitted within two weeks.

The inquiry would find out reasons behind the incident, fix responsibility of officials who were lax in preventing it, the victims of the violence and loss caused to the property.