Tens of thousands of Bangladeshi volunteers along with the country's head of the government Wednesday sang the national anthem in chorus in capital Dhaka on the country's Independence Day. 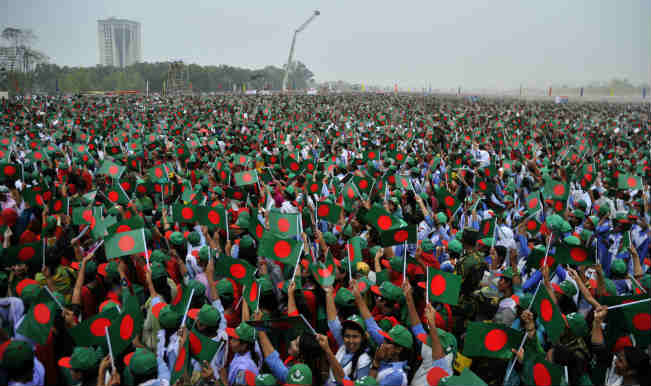 Dhaka, March 26: Tens of thousands of Bangladeshi volunteers along with the country’s head of the government Wednesday sang the national anthem in chorus in capital Dhaka on the country’s Independence Day in a bid to breach the Guinness World Record. Also Read - Woman With World's Longest Fingernails Finally Cuts Them, Her Trimmed Nails to be Displayed at a Museum

Organisers earlier said the main objective of this event was not only to celebrate Bangladesh’s Independence Day which fell Wednesday but also to show the world the inner strength and unity of the people of the nation.

According to the organisers, previously, in May 2013, an Indian organisation had set a Guinness Book record by arranging the singing of the Indian national anthem by 121,653 people.

Bangladesh’s ministry of cultural affairs, in collaboration with the Bangladesh Army and other government and non-government organizations arranged the event titled “Lakho Konthe Sonar Bangla (Sonar Bangla in tens of thousands of voices)”.

After successful completion of the incredible event, the organisers said all the relevant documents and images will be sent to the Guinness World Record committee for validation.

Guinness-accredited representatives were present to oversee the event.

Tens of thousands of Bangladeshi volunteers in December last year formed the world’s biggest national flag in a bid to breach the Guinness World Record.