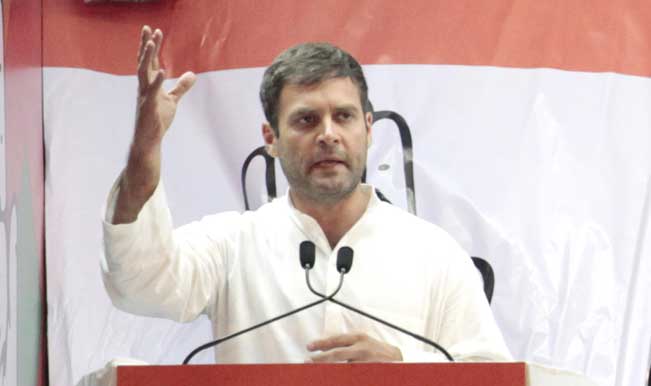 Panaji, Aug 1: A divided Congress in Goa has virtually hoisted the flag of rebellion against office-bearers endorsed by party vice president Rahul Gandhi. Facing a revolt from a section of the party leadership against Team Rahul in Maharashtra, Assam and Haryana, similar dissent which had been brewing in Goa for some months now has now cast a shadow over the party’s performance in the ongoing monsoon session of the legislative assembly. Also Read - WATCH | Congress MPs Burn Copies of Farm Bills in Parliament, Say 'Will Reduce BJP to Ashes'

While an on-going feud between Rahul Gandhi-backed state Congress president John Fernandes and Leader of Opposition Pratapsing Rane recently reached epic proportions over alleged benefits accrued over clearance of a controversial mining lease, open criticism and defiance of Rane by some members of the legislative party has meant a virtual free and unhindered run for the treasury benches for over a week during the month-long monsoon session. Also Read - 'Not Allowed to Speak': Congress MPs Walk Out From Lok Sabha, Demand Debate on India-China Border Issue

“The decision to change our leader of opposition depends on the MLAs in the CLP. If our MLAs come with the recommendation that they want a change in the leadership, I will make sure that it gets implemented within one day,” Fernandes told IANS when asked if he was satisfied with Rane’s lackluster performance.

According to Congress sources, Rane, a chief minister for nearly 20 years, has confided to senior central leaders that he would not step into the party office as long as Fernandes is the state president. Fernandes was appointed last December and, in his own words, tasked by Rahul Gandhi and the Congress High Command with “reviving the party and ridding it of corrupt leaders”.

And he went about it with a vengeance: chopping and changing internal forums, replacing senior leaders, many of them tainted, with fresh faces, so much so that the average age of the party’s panel of spokespersons is just about 35 years. The sheer speed of the intra-party revamp appears to have rubbed several party leaders the wrong way, especially senior leaders with a history of defection, whom Fernandes describes as “Aaaya Rams and Gaya Rams”.

Senior leaders like former South Goa MP Francisco Sardinha, former home minister Ravi Naik and other leaders like Joaquim Alemao, accused of indiscipline and working against the party, have also not paid heed to summons issued by the party’s disciplinary committee headed by Fernandes himself.

While Rane has already cautioned at a press conference that the party’s fortunes could plummet under the present leadership, Dabolim MLA Mauvin Godinho has openly dissented on numerous occasions. Godinho even praised Chief Minister Manohar Parrikar and the BJP on several occasions, including in his speeches in the state assembly. Last week, Godinho created a flutter when he likened Prime Minister Narendra Modi to Congress icon Indira Gandhi.

The scale of dissent towards Fernandes can also be judged by a sponsored feature which ran on cable television some time ago in which the state leadership was criticised by Pratapsing Rane’s son Vishwajeet Rane and Atanasion Monserrate, both Congress MLAs.

The latest salvo against the Rahul Gandhi-endorsed set-up, however, comes in the form of a harassment complaint filed by the now suspended state Youth Congress president Valanka Alemao, whose father Churchill quit the party on the eve of the April-May Lok Sabha elections and joined the Trinamool Congress. “When he (Fernandes) was sitting outside A.K. Antony’s office, he (Fernandes) and (South Goa Lok Sabha candidate) Aleixo Reginaldo were using words like…very abusive language,” Valanka Alemao told reporters.

Congess spokesperson Durgadas Kamat has however accused Alemao of making “baseless allegations. We condemn such cheap tactics used by Valanka Alemao,” Kamat said. The internal dissent in the Congress has almost given the BJP a virtual free run in the state assembly, if it were not for its own ministers making repeated faux pas by calling India a “Hindu Nation”.