BRICS bank on agenda as Modi leaves for Brazil summit 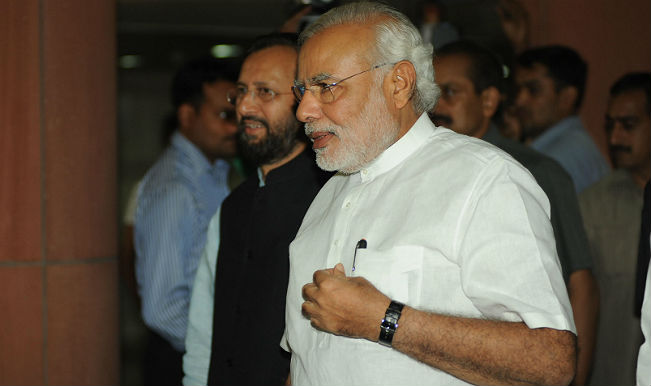 New Delhi, Jul 13: In his first multilateral summit meeting since taking office May 26, Prime Minister Narendra Modi on Sunday left to attend the five-nation BRICS summit in Brazil, where he will have his first interaction with leaders of China and Russia among others. The Sixth BRICS Summit, being held in Fortaleza and capital Brasilia July 15-16, is expected to see finalisation of setting up of the long-discussed BRICS bank – a major initiative of the grouping that together represents 18 percent of the world trade. Also Read - Breaking News LIVE: SIT Arrests 2 Demonstrators in Lakhimpur Violence Case

The BRICS development bank and the Contingent Reserve Arrangement are seen as a counterweight to the Western-dominated financial organisations, the World Bank and the International Monetary Fund. The bloc, comprising Brazil, Russia, India, China and South Africa, accounts for over 40 percent of the global population and has a combined GDP of $24 trillion. Also Read - New Covid-19 Outbreak in China Likely to Worsen in Coming Days

The summit will be held July 15 in Fortaleza, one of the host cities for the 2014 FIFA World Cup and one of Brazil’s largest cities. Modi will hold bilateral meetings with Presidents Vladimir Putin of Russia, Xi Jinping of China, Dilma Rousseff of Brazil and Jacob Zuma of South Africa on the sidelines of the summit. He will also meet the heads of governments of 11 South American countries including Argentina, Bolivia and Venezuela who have been invited by President Rousseff to Brazil. Modi is accompanied by Minister of State for Commerce and Industry Nirmala Sitharaman, National Security Advisor Ajit Doval and Foreign Secretary Sujatha Singh.

In a pre-departure statement, Modi said he looks at the BRICS Summit as an opportunity to discuss with his BRICS partners “how we can contribute to international efforts to address regional crises, address security threats and restore a climate of peace and stability in the world. “I also look forward to our discussions to further advance intra-BRICS economic cooperation and our collective efforts to advance global economic stability and prosperity. “In particular, I look forward to the successful conclusion of major BRICS initiatives, like the New Development Bank and the Contingent Reserve Arrangement, which have seen significant progress since their launch in New Delhi in 2012. These initiatives will support growth and stability in BRICS and also benefit other developing countries,” he said.

Modi said the Summit theme, “Inclusive Growth; Sustainable Development”, will enable us to shape the post-2015 development agenda being discussed in the UN. He said the Summit “will also be an occasion for my first meetings as prime minister with the leaders of our important global partners – Brazil, China, Russia and South Africa. I look forward to meaningful meetings with them to intensify bilateral relations and exchange views on global and regional developments”.

The prime minister said he also looks forward to meeting the heads of the South American countries. “India has traditionally enjoyed close, cordial and mutually beneficial ties with these countries. We share common aspirations and challenges. The Indian Diaspora in these countries also serves as the continent’s enduring link with India.

“South America’s all round progress makes it a potentially important pole of the global economy and a land of enormous opportunities for us. My interactions would enable us to explore new ideas on further consolidating and expanding our ties with South America.” The proposed BRICS bank, called New Development Bank, is expected to foster greater financial and development cooperation among the five emerging markets.

The bank will have an initial capital of $50 billion, with China contributing $41 billion, Brazil, Russia and India giving $18 billion each, and South Africa contributing $5 billion. The development bank would help finance infrastructure and sustainability projects while the reserve fund is aimed to help fend off currency and balance of payments crises.