Gas cutters, iron rods and shovels are being used to reach those trapped in the rubble. 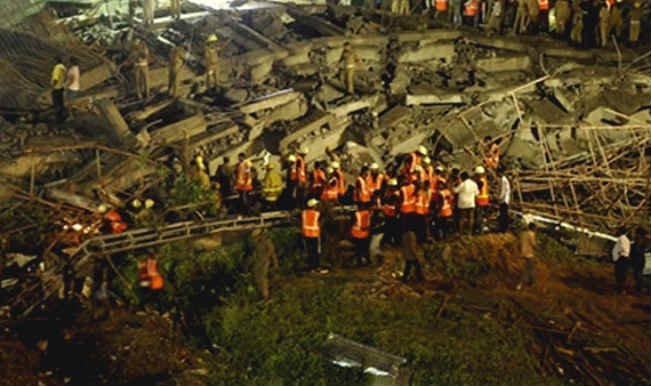 Chennai, June 30 : Deputy Inspector General (DIG) of National Disaster Response Force (NDRF) S.P. Selvan on Monday confirmed that the death toll in the building collapse near Chennai has gone up to 17. Selvan said, “After recovering six dead bodies last night, the team has so far retrieved 38 people, out of which 21 are alive and 17 are dead.” Also Read - Watch | Rock Python Caught Under The Wheels of a Car in Mumbai, Freed By Rescue Workers

He added that removing the debris has been a major challenge and will take a day or two, as heavy rainfall is disrupting the rescue operation. “The rescue operation started day before yesterday and is going on since then. Due to rainfall, there were disruptions. The cleaning of the debris is a major challenge. Today also, we are busy in removing the debris and it will take a day or more.Till today, we have retrieved 38 people and 21 are alive and 17 are dead. Last night, we recovered six dead bodies,” said Selvan. Also Read - Chennai Schoolboy Caught Snatching Cellphone for Online Classes, Kind Cop Buys Him One

On June 28 at around 6 p.m. an under construction building had collapsed at Moulivakkam, nearly 20 kilometres from Chennai. It was raining heavily at the time. The police had detained two directors of the construction company. Rescue operations are on in full swing with multiple agencies, including the National Disaster Response Force, engaged in the exercise. Gas cutters, iron rods and shovels are being used to reach those trapped in the rubble.

Most of the people who were trapped under the debris are construction workers from Andhra Pradesh and Tamil Nadu. Tamil Nadu Chief Minister J Jayalalithaa has ordered top civil and police officials to take immediate action.