At least five people were killed when the Delhi-Dibrugarh Rajdhani Express derailed in Bihar early on Wednesday. 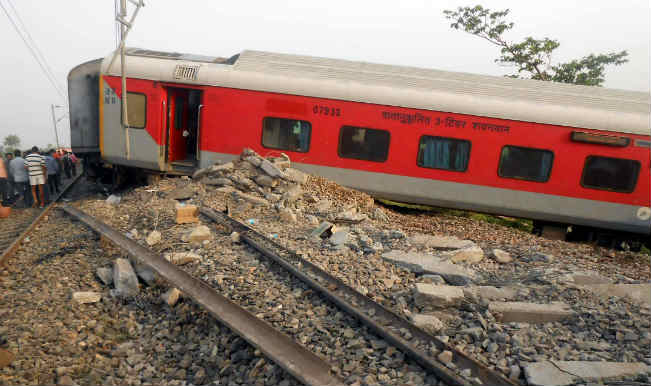 Thirteen other people were injured when all 12 coaches and the engine derailed near the Golden Ganj railway station near Chhapra, some 100 km from here, around 2.30 a.m. when passengers were asleep, railway officials said. Also Read - 'Great Leader And Loyal Friend', Trump's Birthday Wish For PM Modi

Train traffic on the route, which links eastern India with the northeast, was paralysed, East Central Railway spokesman Arvind Kumar Razak said. The cause of the derailment was not clear yet, he added.

Officials said there were no villages near the accident site, and it was difficult to get initial help during the night, and the local administration did all rescue work in the beginning.

Sushil Kumar, a district administration official, said three of the bodies were found trapped under the bogies and were beyond recognition. Rescue personnel used gas cutters to work their way through the mangled coaches. The impact of the derailment was such that two bogies were thrown almost 300 metres from the track, officials said.

They said the number of casualties was less because of the latest technology involved in building the train bogies, and the train was travelling at a low speed. Some of the injured passengers said they could not comprehend what had happened.

“I was asleep, and thought it was an earthquake. I fell from the upper berth, and heard sounds of people crying. I could not understand what was happening,” an injured passenger told the media.

Another passenger said he found his arm fractured, and could not help the other injured people. In another incident, 12 coaches of a goods train also jumped tracks near Motihari in East Champaran district in Bihar. No casualties were reported.

Prime Minister Narendra Modi condoled the deaths and wished the injured speedy recovery. The Prime Minister’s Office said he was in touch with Railway Minister D.V. Sadananda Gowda, who rushed to the accident site.

“The cabinet discussed the railway accident. Prime Minister Narendra Modi raised the issue, and the whole cabinet expressed grief and concern over it,” Prasad told the media in New Delhi after a cabinet meet.

Gowda told the media in Patna that it was too early to comment on the cause of the accident. He said he would do that only after he meets railway and district officials.

An ex-gratia payment of Rs.2 lakh for the families of those killed, Rs.1 lakh for the severely injured, and Rs.20,000 for those who received minor injuries was announced by the railway ministry. Bihar Police spokesman S.K. Bharadwaj said five people were killed.

“We have information of five deaths in the derailment and most of the injured have been admitted to the Patna Medical College and Hospital for treatment,” Bhardawaj said.

Superintendent of Police Sudhir Kumar earlier said some of the injured were taken to hospitals in Chhapra and Patna.

After Rajiv Pratap Rudy, the BJP Lok Sabha member from Chhapra, referred to Maoist activity in the region, Sudhir Kumar denied that sabotage or Maoists might be responsible for the derailment.

“It is an accident and the result of a technical fault. About 500 metres of railway track was found uprooted but there was no evidence of an explosiond no explosives were found from the accident site,” he said in Saran.

Home Minister Rajnath Singh also said it was too early to blame the Maoists.

Referring to “Maoist threats”, Rudy earlier said: “I do not want to go into the merits of the case because it looks like sabotage… from what I understand after looking at the tracks.”

Bihar Chief Minister Manjhi said here: “There is no Maoist connection.” He announced a compensation of Rs.50,000 to families of the four people killed.

Former chief minister Nitish Kumar added: “It is too early to say that Maoists are involved… I have been a railway minister. We cannot say such things until there is an investigation.”

The Bihar government ordered an inquiry into the accident.

Former railway minister and RJD leader Lalu Prasad blamed negligence for the disaster. “The railways should accept responsibility for the accident.”

Assam Chief Minister Gogoi requested his Bihar counterpart Manjhi to provide free medical treatment to the injured passengers and also appealed to the central government to raise the ex-gratia from Rs.2 lakh to Rs.5 lakh for the kin of the dead.

Gogoi had a telephonic conversation with Manjhi and requested him to make arrangements to shift the stranded passengers to Guwahati.

He also directed Deputy Inspector General of Police (Western Range) Surendra Kumar to immediately visit the spot in Bihar and keep in touch with the Assam government over the relief work. The Northeast Frontier Railway diverted at least six trains following the derailment.